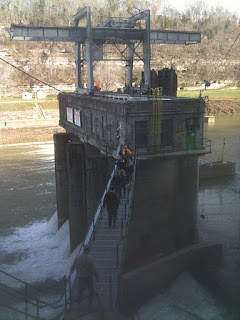 This is the Mother Ann Lee hydroelectric plant near Shakertown (Ann Lee founded the Shakers).

This turbine is one of three that provides renewable power.

Centre students voted to tax themselves to help pay for this turbine. The plant produces the equivalent about about a quarter of Centre's power.

If you look closely, you can see the Centre stencil at the top of the turbine. 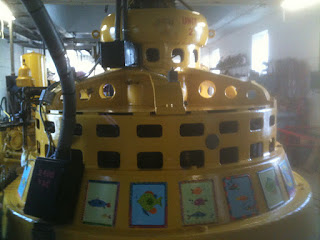 David Brooks has another fine piece of pop sociology on the kinds of inequality that it is socially acceptable and unacceptable to wave about in America today.

One pairing that is particularly interesting to me is this:

Status inequality is acceptable for college teachers. Universities exist within a finely gradated status structure, with certain schools like Brown clearly more elite than other schools. University departments are carefully ranked and compete for superiority.

Status inequality is unacceptable for high school teachers. Teachers at this level strongly resist being ranked. It would be loathsome to have one’s department competing with other departments in nearby schools.

Brooks is only overstating a bit. Higher education does have many public rankings of schools, and even of the same discipline in different schools. However, disciplines within the same school generally adopt the polite fiction that they are on same level as one another, sharing the school's overall status. This is much like what Brooks says about high schools.

Nonetheless, I have noticed, comparing my life in higher education with my wife's work with elementary and secondary education (she is an education policy wonk) that the lower the age of students being taught, the more important it is to teachers to maintain that they are all at the same status level.

It is also true that the lower the age of students being taught, the more likely it is that the teachers are women.

And women, in general, are more likely to wish to treat all of their social relations as if everyone were on the same level, whereas men are more comfortable with the idea of hierarchy.
Posted by Gruntled at 3:00 PM 1 comment:

The Penn State Story is About Pedophilia, Not Football

The horrifying scandal emerging from Pennsylvania State University is first and foremost about the repeated sexual abuse of boys by a man.  What makes it worse is that the man used his prominence as a coach to run a charity for boys, who he then took advantage of.  And that scandal, horrible as it already was, was made worse by two of his bosses lying and covering up for the coach, which let him keep abusing more boys for more years.

The best element of the story thus far is that the criminal is in jail and the liars have been fired.

A relatively minor element of the story is that two of the criminal's bosses, though they did further the investigation of the crimes, did not do so with enough diligence.  As a result, Penn State also fired these other two bosses.  It matters a bit that the university trustees were willing to fire the university president because he was not zealous enough in prosecuting sexual abuse of children by a university employee.  This is to the university's credit.

The least important part of this story is that the head football coach was also fired for not being zealous enough in furthering the prosecution of sexual abuse of children by one of his staff members.

So why was the lead element of the news story in many venues - including those that don't care about sports - that head coach football coach Joe Paterno was fired?  Why did Penn State students riot in the street about the firing of the head football coach - and not about the sexual abuse by the assistant football coach?

Because big-time sports are the religions of the masses.
Posted by Gruntled at 10:44 AM 8 comments:

The Tide Has Turned on the Tea Party

I have thought from the outset of the Tea Party movement that it would last three elections cycles.

The main reason they can't change the entire government is that nearly everyone needs the government, including the Know-Nothings in their role as citizens of an actually functioning country.

And what happens after that is that the Know-Nothings become disgusted with their turncoats, or disheartened at their failures.  Some of the movement diehards quit all politics in despair.  Some of the single-issue activists give up on changing the whole system and focus on their single issue.

The third cycle of my three-cycle prediction will not be completed until next November.  But yesterday's election was a portent of things to come.  The Tea Party, as detailed surveys have shown, are not small-government libertarians.  They are mostly traditional conservatives, fed up with the government subsidizing and encouraging people who they think undermine the nation.  These include those with loose sexual morals; expensive, featherbedding government unions; and disorganized, poor voters. The Tea-Party-inflected state governments elected in the last cycle made laws or ballot measures suppressing all these kinds of bad citizens (from a Tea Party perspective).

But a majority of voters turned back all of these suppressive measures.

To me, that suggests that the tide has turned.  The country has hit the rightward wall, and is beginning to turn back toward the center.
Posted by Gruntled at 10:23 PM 6 comments:

Great Night for Democrats in Kentucky

Democrats look like they are going to make a clean sweep of the statewide races, except one.

The one office Democrats lost was Agriculture Secretary. This was just - the Democrat, Farmer, really had no qualification for the office.  The Republican, Rep. Comer, won fair and square.

The turnout was very low.  I spoke to this yesterday.  I thank all those who voted.

To those Kentuckians who did not vote today but could have:  you have lost your right to complain about our statewide elected officials for the next four years.
Posted by Gruntled at 8:30 PM No comments:

Who Votes in a Low-Turnout Election?

People who pick up litter.

People who let others merge onto the highway.

People who wear seatbelts, all the time.

Who votes in low-turnout elections, like the one Kentucky will have tomorrow?

People who feel that being a dutiful member of the community is part of who they are.

Voting is not really about what's in it for you.

Voting is not really about whether your vote will make a difference.

Voting is part of being a member of a democratic community.

I can't prove any of the above.  This is my opinion.  But it is my opinion that voting is more a matter of identity and loyalty and character than it is about any instrumental goal.

Centre Fights Above Its Weight - for the Liberal Arts

Dave Serchuk had a wonderful blog for Forbes on why liberal arts education is so necessary to national creativity. He took Steve Jobs' studies at Reed - taking classes in calligraphy even after he officially dropped out - as evidence of the unknowable future value of a broad arts education.

Serchuk also electrified the Centre College world with this sentence:

There’s a reason schools like Reed, Evergreen, Wesleyan, Centre College, and Brown will continue to punch way above their weight when it comes to minting future generations of leaders and innovators.