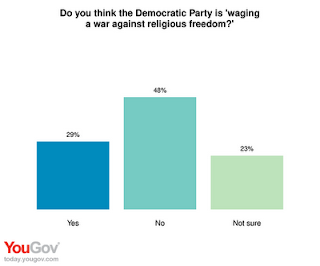 A YouGov/Economist poll found that only 29% think the Democratic Party is "waging war on religious freedom."

Even among weekly churchgoers and people who say religion is very important in their lives, most reject this recent culture wars theme.

Teen pregnancy rate in the U.S.:

This is the lowest teen pregnancy rate in forty years.

The rate is going down because teens are having less sex and using contraception more.

Posted by Gruntled at 7:56 AM No comments:

One of the hallmarks of difference feminism is that women tend to make different choices than men do, and this is fine. Equality of opportunity for women and men is not likely to lead to the same outcome.

Egalitarian feminism, by contrast, tends to see any difference in outcome between men and women - a difference in the proportion of CEOs of large corporations, for example, or of average pay - as evidence of discrimination against women. They are committed to the idea that women are essentially the same as one another, as well as the same in essence as men, so inequality among women is also evidence that something is wrong.

The belief that women are essentially the same as one another, and that justice means keeping equality among women is, Deborah Tannen has found, one of the distinctive hallmarks of women's communication and relations with one another.

The belief by egalitarian feminist women that women are the same is one of the women's differences that difference feminism accepts.
Posted by Gruntled at 2:58 PM 5 comments:

Happy Easter - Even if it is the Most Pagan Holiday

The Resurrection is the peak of the Christian calendar.

The American celebration of Easter is the most pagan of holidays.

Nonetheless, both are happy occasions.  I celebrate them.
Posted by Gruntled at 2:18 PM 1 comment: