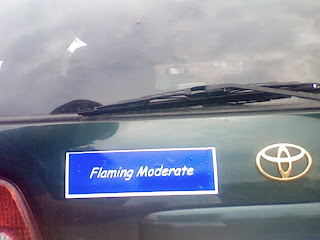 Each Saturday I will add a new sticker to my van, starting from here.

Today I put up what I think of as the title of the collection.
Posted by Gruntled at 5:35 PM 4 comments:

Yesterday my son, who is 16, put on a suit to help lead the Veterans Day celebration put on by the Junior State of America at his school. In Danville, Kentucky, there were flags everywhere. My home coffee house gave free coffee to veterans. People - quite liberal Democratic people - shook veterans by the hand and thanked them for their service.

This was not just in Danville. Facebook was full of flags, thanks, and remembrances of veterans - mine included. Rachel Maddow on MSBC, a notable liberal on the most liberal network, had encouraged everyone the day before to may a big splash of celebrating Veterans Day.

This made me think back to what things were like when I was 16 in 1976. We pulled out of Vietnam in 1973. Nixon fell in 1974. Saigon fell in 1975. By the Bicentennial we were ready to celebrate the Revolutionary soldiers, but not the recent ones. Liberals didn't fly flags. Veterans Day was celebrated by old soldiers, only. It was, as Doonesbury put it, a kidney stone of a decade.

Things are much better in this country today.
Posted by Gruntled at 7:25 AM 10 comments:

Nils Andresen has an interesting series on the conservative Frum Forum blog on the brain drain of elite college students from the Republican Party. He summarizes the trend thus:

Republicans have gone from having a clear advantage among top students in the decade following the Eisenhower administration, to being competitive under the Nixon and Ford administrations, and from being an energetic minority during Reagan and Bush Sr. to being almost eradicated today.

Andresen speculates that this trend is driven by the Republican leaderships' attacks on "elitists," their cultivation of anti-science (young earth) creationists, and their encouragement of sheer falsehoods like those of the "birthers." He worries that the long-term effect will be to dry up the pool of conservative policy thinkers and people well informed about the world context in which policy has to be made.

I can testify that the recent turn of the Republican Party has made the position of Republicans at Centre College more difficult. Centre students are centrists, on the whole. There are significant numbers of moderate Democrats and moderate Republicans among the students. Town/gown relations have historically been good. Yet in the most recent elections the tone of local Republicans has taken an unpleasant turn, attacking the "elitism" of the college, charging professors with socialism, and even suggesting that students not be allowed to vote locally lest they "cancel out" the votes of local "property owners." Centre Republican leaders have been put in a difficult position by the ill-informed positions of some national party candidates and the short-sighted radicalism of the tea party wing of the Republican Party. I have seen on the ground that these well-educated and politically interested young people will have a harder time committing themselves to the Republican Party, when the party disparages people like them.

When I was in the federal Department of Education under President Reagan and Secretary Bill Bennett, it was clear that the Republicans could not field a team. In other fields - finance, and perhaps in defense - they had an informed policy makers. In education, though, and most other fields of domestic government, the Republicans did not have a body of informed people to draw on to make policy, and even fewer willing to implement it. All of the top leadership of the department were Democrats when they learned how to govern, and had only recently switched parties in order to take office.

Educated people run society, including government. A party that loses the most educated young people today will reap a poor harvest tomorrow.
Posted by Gruntled at 7:49 AM 36 comments:

Roots of Empathy is a fantastic program that teaches kinds empathy by having them watch, and take the perspective of, real babies. The researchers do not know how it works. But is does.

My favorite line from David Bornstein's article: "The baby seems to act like a heart-softening magnet."
Posted by Gruntled at 2:50 PM 2 comments:

Dismantling Orientalism, One Piece at at Time

For years we have required students to take two courses under the General Education heading of "Fundamental Questions." One of those courses must be either REL 110 "Biblical History and Ideas" or REL 120 "History of Christian Thought." For the second course they may choose from a wider array, which includes 110, 120, and REL 130 "World Religions" as well as a variety of philosophy courses. "History of Christian Thought" is an introduction to the whole Judeo-Christian tradition, as a fundamental basis for understanding Western civilization. "World Religions" is primarily about Islam, Hinduism, and Buddhism.

The Religion program and the curriculum committee proposed changing these General Education requirements, which is a fairly big deal here. They proposed that the two basic choices be 110 (the same Bible course) and a new course, REL 150 "Western Religious Traditions." REL 130 "World Religions" would become "Eastern Religions." REL 120 (Christian thought) would move to the second array of courses.

What does this boil down to? Islam is being moved from "world religions" to "western religions" - understood as the Abrahamic faiths.

Coincidentally, my "Macrosociological Theory" seminar is working its way through Edward Said's Orientalism this week. Said's point is that Europeans invented an "Orient" that began with Islam, then incorporated the cultures of India and points east. Islam was made to seem more different from the other Abrahamic faiths than it really is. This has had bad consequences for centuries, and never more so than today.

The faculty passed this improvement to our General Education core without a dissenting vote.
Posted by Gruntled at 8:37 AM 3 comments:

Getting rich doesn't make you happy. Doing something worthwhile does.

This week's news illustrates the latter point with some charmingly happy lottery winners, Allen and Violet Large of Truro, Nova Scotia. They gave away almost all of their winnings, mostly to local charities. They chose to decline in class in order to increase in status - a success they earned.
Posted by Gruntled at 10:55 AM No comments:

Mike McManus, the moving force behind community marriage covenants, has a fine stump speech for anyone running for office. His argument: "divorce and unwed births are two of the engines driving up the cost of government."

In addition to all the direct costs, there are the many indirect costs that come from worse health, less education, spotty employment, and increased crime rates that we can reliably predict from marriage breakdown and single parenthood.

McManus, who is a pretty conservative guy, has a quite moderate approach to gradually diminishing the welfare benefits of cohabiting poor parents who marry. This seems like a practical and centrist approach to me.
Posted by Gruntled at 10:46 AM 2 comments: