This may only appeal to polity nerds:

"Is Missouri just going to keep its electoral votes?"

Improving America's Standing in the World 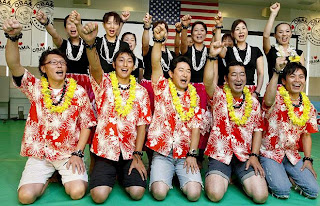 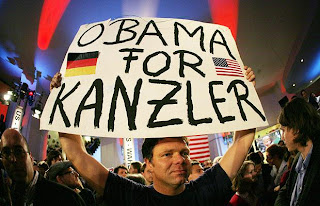 One campaign promise made by President-Elect Obama has already been fulfilled: to raise America's standing in the world. It is so gratifying -- no, astonishing -- to see foreigners marching joyfully with the American flag, instead of burning it.


Of course, the honeymoon can't last. Hard choices will have to be made, some of which will displease some in other nations. We will have to fight and even bomb in Afghanistan and Pakistan, which may lead to riots in the streets. Economic hardships around the world will follow from the ruins of our financial gamblers' binge, no matter how fast we rebuild. We should push China on human rights and their currency tricks. Whatever we do about North Korea, Burma, and Congo will make some enemies. And Russia could get ugly again.


Still, things are already better because the world is expecting a U.S. administration that will be less belligerent, less arrogant, less unilateral. And so am I.
Posted by Gruntled at 11:06 AM 4 comments:

Ballot Measures Head to the Center

I find that reporting on ballot measures is often more heated and polarizing than even the horse-race stories about candidates. Just about everyone has an opinion on the presidential candidates, and those opinions cover the full spectrum of nuance. Ballot measures, on the other hand, draw only partisans to hit the streets, give interviews, and shape the way stories are reported. The stories, therefore, tend to show all-or-nothing victories. Yet the usual reality is that the centrist position prevails, if the people are given an option to choose.

The lead stories on ballot measures were the bans on gay marriage passed in Arizona, Florida, and California. California was the big news, because the state Supreme Court had overturned an earlier ballot measure that had also banned gay marriage. Yet this is in line with the middle position that we find all over the country: most people oppose same-sex marriage, but support civil unions. Florida and California had millions of voters who voted for Obama and against gay marriage. Domestic partner registration, a kind of civil union, is still legal in California. Even there, the issue is more symbolic than substantive. There are just under 100,000 same-sex couples in California, out of a population of 36.5 million, yet only about 4,000 actually got married when it was legal.

Arkansas also banned adoption by unmarried couples. This has been reported as a ban on gay adoption, and of course there are no legally married same-sex couples in Arkansas. The overwhelming majority of couples affected by the ban, though, are opposite-sex cohabitors, who could marry. The voters of Arkansas are following popular and social science wisdom that children do best with two married parents.

The abortion measures that passed were modest, popular, centrist changes, while the extreme measures failed. Thus California passed a parental notification requirement, with work-arounds if that would be too problematic for the girl. On the other hand, the total bans on abortion in Colorado and South Dakota failed. The Michigan measure to allow stem cell research was amazingly detailed and careful for a constitutional measure.

There are others that show the same pattern, in which centrist measures pass, while extreme changes fail. Washington passed a physician-assisted suicide law, with careful limits that apply only to certified no-hopers. Michigan allowed medical use of marijuana, not blanket decriminalization. By contrast, "Taxachusetts" voters had a chance to abolish the state income tax, and turned it down two to one.

Successful ballot measures are usually centrist compromises between extreme ideas. Their story should be told that way.
Posted by Gruntled at 7:53 AM 1 comment: 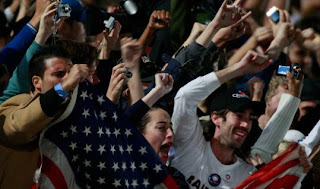 One of the healthiest developments of this election has been the rebirth of open patriotism by Democrats and liberals. Democrats and liberals are patriotic, of course, but for a long time they let their opponents take the flag and the songs of national pride as their own private emblems. We fly the flag at the Gruntled house at every election, but we used to be the only Democrats on the street who always did so. No longer. Flags were everywhere at every Democratic event I saw or went to, culminating in Sen. Obama's rally in Grant Park last night, as this picture shows. In fact, my favorite image from the great event was a shot of Jesse Jackson, just another guy in the enormous crowd, with tears in his eyes and a flag in his hands.

Sen. McCain gave a glorious concession speech, and Sen. Obama responded in kind. Both were emblems of decent America.

The Grant Park rally began with the national anthem and the pledge of allegiance. We stood for the pledge, watching the flag on television, at our house last night.

My favorite instance of flag-waving Democracy, though, came in a magnificent dispatch from Megblum, Gruntled Child #1, amidst the College Democrats at Swarthmore College, which she entitled "Election Reflections/Taking My Country Back":

Mom told me that in 1980, when Reagan won, many campus leftists were disturbed by people running around campus singing "God Bless America." Tonight, I called her to let her hear as a campus a capella group led the crowd in an impromptu rendition of the national anthem.

And when the senator came on with his acceptance speech, a funny thing happened. Having responded throughout the night with rousing choruses of the familiar "Yes We Can," at some point they switched to something very different. A room full of lefty, intellectual, cosmopolitan Swatties spontaneously started chanting "U-S-A! U-S-A! U-S-A!"

Mrs. G. and I were in line when the polls opened at 6 this morning. There was already a line out the door.

We woke our son up. 14-year-old boys with the day off from school don't normally relish rising at 5:30, but he went cheerfully, albeit sleepily, to see us vote in this historic election. Then he went back to bed.

We are now in our local coffee house, where I expect to see a larger-than-usual crowd, many with "I Voted" stickers, all morning.

I come from a family of yellow-dog Democrats. We are from the McGovern die-hard wing of the party. My youth was devoted to the overthrow of the Nixon Regime, and we were among the majority (for once) who welcomed Jimmy Carter's restoration of morality.

Nonetheless, for my first election, I registered as a Republican. I guess I have always been drawn toward the vital center, even before I had the concept. I had been reading a biography of Teddy Roosevelt just before the primary in 1980. I wanted that party. Moreover, in rural New Jersey, there weren't even enough Democrats to hold a primary. So I cast my first vote for John Anderson.

In the fall of 1980, my first presidential election, I was a Quaker at Swarthmore College -- about as deep into what we would now call "blue America" as it would be possible to get. The campus was overwhelmingly political, and overwhelmingly Democratic. The night before the election, the college showed a film in the main auditorium attended by most of the student body: "Bedtime for Bonzo," starring Ronald Reagan and a chimp. On the Tuesday, I happily voted for Jimmy Carter, and went to a church committee meeting.

By the time the meeting was over, the election had been called. The unthinkable had happened: Ronald Reagan was president. The many election parties on campus turned into wakes. The animal house fraternity, the one bastion of Republicans on campus, marched from one Democratic gathering to another, singing songs about Reagan and paratroopers, getting drunker and drunker.

What happened to the Democratic Party after that, in the micro at Swarthmore and in the macro on the national level, was a down-hearted round of recriminations and second-guessing. And then we rebuilt, and came back better. And more centrist.

I believe the same thing will happen to the Republican Party this year that happened to Democrats after 1980. And ultimately this will be good for the country.
Posted by Gruntled at 7:33 AM 2 comments:

Just after the party conventions, McCain was ahead with this group. Pollsters pay attention to this group as a group because it appears volatile. But it isn't, really. What this change means is that "Catholic" is not a voting bloc any more. The very fact that they have to report Anglo and Hispanic Catholics separately shows the cracks in Catholic as a political identity.

I believe the election of John Kennedy normalized Catholics in politics at all levels. As a result, Catholics are no longer an electoral bloc, but are divided by ideological and economic issues, just as Protestants are.

I believe the election of Barack Obama will eventually have a similar effect for African Americans. Right now, the black vote is overwhelmingly Democratic. In fact, black Americans support the Democratic presidential candidates at higher rates than all registered Democrats do. In this election, not surprisingly, the black vote for Obama is likely to be above 90%, and black turnout will probably be the highest ever.

Twenty years from now, though, the black vote may be more divided between the parties. African American voters are likely to vote their ideology and economic interests. There will be more black Republican candidates, probably small government, anti-affirmative action, pro-life evangelicals. I pick twenty years because that is how long it took the Kennedy Catholic bloc to split into progressive Catholic Democrats and Reagan Democrats.