The Gruntled Center shuts down for two weeks in the year - August family reunion at Capon Springs, and Christmas week.

I hope you all get to enjoy blessings this week, and that we all return refreshed in 2011.
Posted by Gruntled at 9:41 AM No comments: 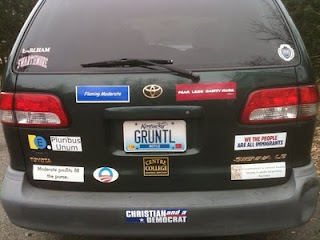 I owe you several weeks of Saturday posts of the new stickers on the Gruntlwagon, much delayed by weather. Here, as an early Christmas present (to me, at least), is the finished, um, canvas.

If they are too small to read, the five rows, from top to bottom, left to right, read:

E Pluribus Unum [Earth flag]; GRUNTL; We the People Are All Immigrants.

Christian and a Democrat.
Posted by Gruntled at 1:08 PM 4 comments:

President Obama has set up a group to create uniform standards for federal agencies to accommodate workers who breastfeed their babies. Many federal agencies have their own policies. The new standards would provide a model for the other agencies and encourage best practices. Accommodating breastfeeding is a good, low-key kind of family support.

Interestingly enough, the first federal agency to create its own breastfeeding policies was the National Security Agency.
Posted by Gruntled at 8:59 AM No comments:

The teen birth rate is down 6% since last year - the lowest level recorded in 70 years of U.S. statistics.

The young adult birth rate is down 7% since last year.

Both drops are probably due to the bad economy - girls and women choosing not to have babies because it will be harder to afford them.

Which demonstrates that most of the teen pregnancy rate is not due to ignorance or an inability to plan.
Posted by Gruntled at 4:55 PM 3 comments:

The Birth of an Erroneous Statistic: How Many Wives Earn More Than Their Husbands

About a quarter of wives make more than their husbands in couples in which both work.

This figures is based on a study made just before the recession. Since the recession laid off more husbands than wives, the number may, at this moment, be closer to 1/3. In many of those couples, the husband is not working at all, though he is likely looking for work.

Historically, husbands and fathers work or seek work - period. Most wives and mothers, on the other hand, are more likely to trade off work, or more consuming work, against family needs.

A recent Reuters story, citing an unnamed "Princeton study," stated flatly that in a third of couples, she makes more than he does. The nuance of "married" and "both working" was lost.

I fear that this number - "She makes more than he does in one third of American households" - will take on an independent life, like the "50% of marriages end in divorce" myth.
Posted by Gruntled at 9:48 AM No comments:

No Labels Will Go Nowhere

As a centrist I want to like No Labels, an attempt to create a common ground political movement. They offer that they are Democrats, Republicans, and independents marching under the slogan "Not left. Not right. Forward."

Alas, I think they will get nowhere. We have never been a non-partisan country - that version of "no labels" is a non-starter. The centrist path has always depended on bipartisanship. Bipartisanship depends on there being two parties with a plan for governing. Right now the civil war within the Republican Party has left them torn among the social conservatives, the libertarians, and the remaining lower-taxes-on-the-country-club Establishment. The only thing they agree on is preventing Democrats from governing. I think that until the tea party revolt runs its course, the GOP will have no positive plan of what it is for.

When we return to the normal American condition of two parties each in favor of government and governing, then we can have bipartisanship and a centrist way forward again.
Posted by Gruntled at 2:37 PM 1 comment: