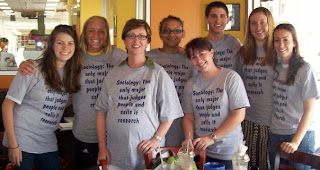 Students of my dear colleague Sarah made a tee shirt to celebrate her tenure, her impending baby, and sociology itself. (Click on the picture to read the shirts.)
Posted by Gruntled at 2:10 PM 2 comments:

Love Entangles Us - at a Distance

This goes in my The World is Wonderfully Weird file:

The Love Study takes people in love, separates them in sealed rooms, shows pictures of the beloved to one, and measures the physical state of the other. Results:

After running 36 couples through this test, the researchers found that when one person focused his thoughts on his partner, the partner's blood flow and perspiration dramatically changed within two seconds. The odds of this happening by chance were 1 in 11,000. Three dozen double blind, randomized studies by such institutions as the University of Washington and the University of Edinburgh have reported similar results.

These results drive physicists nuts. They can't explain them, they just are certain that it couldn't really happen.

I don't know why these results happen. I just think the world is wonderfully weird.

I do know that when my wife heard this story on National Public Radio, she sent thoughts to me 150 miles away. I suddenly felt moved to email her about what I was doing. Happily odd.
Posted by Gruntled at 8:38 AM 1 comment:

The Underground Railroad Freedom Center is not quite in Kentucky, so is not technically part of my Kentucky 50 by 50 project. Nonetheless, I had a day in Cincinnati and had wanted to see the museum, so Providence made today the day.

The Underground Railroad museum is a new, high-profile project of the Great and the Good of Cincinnati. It is located at the foot of the Roebling Bridge, a city landmark on the Ohio River. Its neighbors are the new football stadium on the west, and the new baseball park on the east. It is nicely done. It has a few splashy items - films and audios narrated by Vanessa Williams, Angela Bassett, and Oprah Winfrey, the keys to John Brown's cell, and the centerpiece, a rebuilt slave pen rescued from Kentucky. The core historical section on slavery, abolition, and the underground railroad, are pretty substantial. The arty bits - the animated films, commissioned art, dramatic recitations - are all well done.

The Underground Railroad Freedom Center is a cause museum. Slavery, not the underground railroad as such, is the cause. The abolitionists, escaped slaves, even Nat Turner and Denmark Vesey are heroes. The slave masters, slave catchers, pro-slavery politicians, and fellow-travelers are the bad guys. Wicked, slaveholding Kentucky, visible through the picture windows, is the symbol of the evil land.

The big theme of the museum is freedom in general. The specific kind of freedom served up, though, is that of African Americans. And fair enough. A worthwhile expedition.
Posted by Gruntled at 6:23 PM 1 comment:

The U.S. unmarried birth rate leaped up to 40% recently, from less than half that in 1980. This keeps pace with large rises in unmarried births in European countries.

In Europe, though, the state gives money and services to couples. In the U.S., many more of those unwed mothers are married to Uncle Sam.

We need marriage more than Europeans do. If we have the same percentage of kids of unmarrieds that they do, our kids will be worse off.
Posted by Gruntled at 8:41 AM No comments:

A British study by Andrew Oswald and Nattavudh Powdthavee found that the more daughters you have, the more likely you are to vote for left-of-center parties. The reverse happens with sons.

Nathan Silver at fivethirtyeight.com has the link to the full study.

(I thank the mother of our two daughters and one son, all good Democrats, for finding this.)
Posted by Gruntled at 8:37 AM 4 comments:

Why Humans Are Built for Sperm Wars 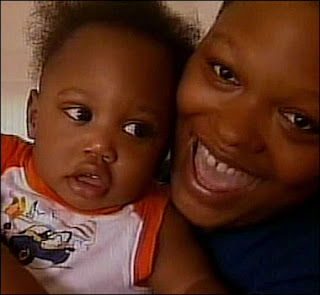 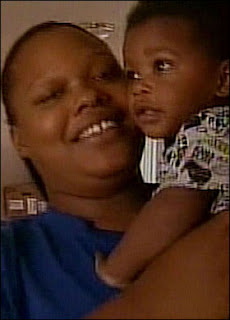 A woman in Houston has given birth to twins who were conceived by different fathers.


Most of the sperm that men produce are not designed to fertilize an egg, but to fight a war against sperm from other men. Nearly ever time that sperm from two men are in a woman's vaginal canal at the same time, only one can win. Not this time.
Posted by Gruntled at 7:09 AM 3 comments:

What has changed this year is that a couple of percent of centrists have decided that their position is better described as pro-life than pro-choice.

I think we should remember that this choice is about what the law should allow, not what is a good idea to do. There are many centrist positions that think the law should permit choices that are almost always a bad idea, just because of that "almost." If you had only two choices, would you call that pro-life, or pro-choice?
Posted by Gruntled at 8:14 AM 1 comment: