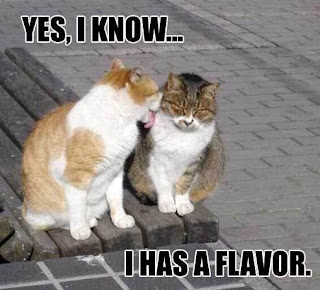 My daughter, the wonderful Endub, introduced me to LOLcats last night. They are very silly captioned cat pictures. We laughed ourselves sick.

The emerging convention of this, um, artform, have given the cats a very peculiar grammar, as suggested by the site from which this example comes, I Can Has Cheezburger.

This is what the internet was created for.
Posted by Gruntled at 8:17 AM 2 comments:

Today's guest blog is from Taylor McGovern who wrote a wonderful journal entry for my family life class that I thought should be shared.

We haven’t talked about gender differences in quite a while but I noticed one recently that I have to talk about. Women treat their pets as their children and men treat them as their friends. My boyfriend’s brother, Ben is dating a girl who just got a new puppy. The dog is absolutely adorable but she talks to it like it is her new-born child. She says things like, “Now, mommy says don’t bite. Listen to mommy.” Of course, the dog has no idea what she’s saying and continues to bite her and everything else in sight because it is a DOG not a child. And she also calls Ben the dog’s “daddy” but they’ve been dating for less than a month. I assume it doesn’t freak him out but I know it would freak Brian out. This is an extreme case and I’m being rather hard on this girl but Brian and I have been laughing about it all week. I just got a new cat at Christmas and I’m just as guilty as she is with the baby talk – although I never said anything about being it’s “mommy” or Brian being it’s “daddy.” My mom, however, would say things like “Come here to your grandma” which is just hilarious. Anyway, the point I’m getting to is that women get pets and it’s like they are getting children.

But men treat animals as newfound friends. My dad talks to my cat in a normal voice and feels sorry for him when we are coddling him. He’ll call him by saying, “OTIS, my man!” which is very friendly and masculine. Ben will play with his girlfriend’s dog instead of cuddling with him and he uses his normal voice. My dad makes fun of anyone who talks to an animal in any abnormal voice. The pets for men are new friends, companions. I guess that’s why they call dogs man’s best friend – although I think they were speaking of mankind with that phrase.

It’s interesting because these two views on pets are totally different and I wonder how many couples (like Ben and his girlfriend) get pets thinking one thing about them and then find out that their mate is thinking another thing. What a mean is – if a girl gets a dog and thinks it’s going to be a tester child while the guy thinks it’s going to be a new friend, there could be some problems
Posted by Gruntled at 8:53 AM 2 comments:

Several states are beefing up their restraining orders on potential girl-friend beaters by making them wear global positioning system (GPS) bracelets. When these guys get within a restricted zone, such as near the potential victim's house or work, she gets a quick warning message.

In the early studies, none of the bracelet wearers has violated the order to stay away. The researchers think that this excellent result is due, in part, to the restrained guys knowing that someone is watching them, that the object of their obsession is not alone in the world.

This seems to me to be a good thing. The barrier so far is cost -- about $10 per day. I think this cost could be driven down dramatically through further automation. And this is the sort of ounce of prevention that pays for itself in avoided law-enforcement costs, pain, and death.
Posted by Gruntled at 10:33 AM No comments:

Where Gangs Are a Step Up

I have a student from the Hyde Park slum of Boston. He said he was the only young man not in a gang. Each day his grandmother prayed for him when we went out the door, and he prayed thanksgiving when he got home safely. He now has a scholarship to study a world away in lovely Danville. He should be able to graduate and do good things in the world.

His part of town is not the worst section of Boston. Another student of mine had a cousin shot to death in Dorchester. It was the third cousin she had lost that way in a year. When I asked her if she knew why it happened, she sighed and said "Just ... stupidness." The dead man may have said something at some earlier time about a girl. A group of guys walked up as the young man was talking to his pregnant girlfriend and her mother. They beat him up, then shot him. Even with all that information, this murder may remain unsolved, like the others in her family. She said the police and the press are likely to report this as a gang killing, but gangs, she said, are old news in her neighborhood. There used to be gangs, as there still are in Hyde Park. They provided a measure of protection for those in them and order in the neighborhood.

Dorchester has fallen below even the level of gangs. Now there is no order -- all the young men can be assumed to be armed ("have hammers"), and are likely to "roll up" on anyone for any reason or no reason. Dorchester wishes it still had gangs. Now it is just anarchy.
Posted by Gruntled at 7:27 PM 6 comments:

One Cheer for Jerry Falwell

Jerry Falwell died today. I disagreed with him on most political positions, and many of his religious positions. In his later years he said some truly reprehensible things.

Jerry Falwell changed the definition of fundamentalist Christianity to include political involvement. Before the "Moral Majority," fundamentalists were separated from the world, especially on political matters. They were waiting for the end, and expected God to sort out this sorry world, and that soon. Fundamentalists differed from evangelicals, their post-war, college-educated cousins, precisely over whether it was worth trying to save this world.

The Moral Majority as an organization was mostly the creation of political conservatives who were not themselves fundamentalist Protestants, but who saw that they needed someone out front who was. Falwell, an independent Baptist of great entrepreneurial zeal, took that role and ran with it. The organization that he created was mostly made of fundamentalist and evangelical Protestants. A greater wonder is that it got them to work together with conservative Catholics, Orthodox, and Jews -- often for the first time.

I believe that when groups get involved in electoral politics, they can't help but be drawn toward the center. They learn something of the humanity of their opponents by engaging them. More effectively, they learn that they have work together with people who oppose them on one issue but agree with them on another. This moderates conflict and helps hold the body politic together. If electoral politics were possible in Iraq, the civil war would diminish. Electoral politics is happening in Iran, and moderates are emerging within an extreme cultural revolution.

So let us give one cheer for Jerry Falwell, may be go to his reward.
Posted by Gruntled at 10:25 PM 1 comment:

The Queen Has a Terrible Job

I commend Stephen Frears' excellent film, "The Queen." Helen Mirren won a well-deserved Oscar for playing Queen Elizabeth trying to cope with reality when ex-Princess Diana died. I have never favored monarchy, and few monarchs grow on me up close. Still, I have to feel for Elizabeth Windsor (or whatever of her many last names she might pick) who was supposed to be a minor royal, when all of a sudden she was stuck as a young woman with being princess, then queen. She has been truly dutiful for decades, stuck in an endless round of official tasks, few of which are intrinsically important. And the difficult kids. And the ungrateful press. And snippy foreigners who don't like monarchy anyway.

At one point in the film, Elizabeth's husband, Prince Philip, says that Diana should have done her duty as a royal wife and overlooked Charles' inevitable mistress. The Queen gives her husband a small pained look. That is another ugly requirement of the job.

Queen Elizabeth has a terrible job.
Posted by Gruntled at 11:28 PM 3 comments:

Invested Motherhood is Not a Feminine Mistake

At the Family Scholars Blog, I read a brief quote from Leslie Bennetts’ The Feminine Mistake:

“It’s nice to be at home when your child loses her fourth tooth, but is it worth the price you might pay if your breadwinner dies or divorces you, and you end up losing that home entirely?”

Well, yes, it could be worth the price.

I’m thinking of my mother, who spent more than a decade at home with kids, chose divorce, quit a satisfying job to move her kids closer to extended family, changed jobs to move in with her aging mother, and stopped working in order to provide hospice care when cancer attacked her older sister.

In a life full of ideas and art and humor and books and talent and wisdom and affection, my mother has also handled quite a few cramped apartments, unreliable cars, and struggles to make ends meet.

So no, Ms. Bennetts, I can’t fear having to work harder or live more cheaply in the future because I loved energetically yesterday or today.

My feminist mama made sure of that.
Posted by Gruntled at 7:34 AM 2 comments: