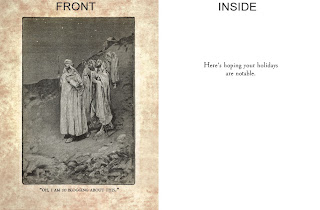 From my brother-in-law.
Posted by Gruntled at 7:15 PM No comments:

I'll be off enjoying family for a couple of days. I hope you can do the same.
Posted by Gruntled at 10:39 PM No comments:

Christianity Today has an article on evangelicals rethinking divorce. The key issue is whether Jesus rejected divorce for any cause, or whether he rejected the strict "any cause" standard being debated in his day, and instead accepted the more lenient Old Testament grounds. British evangelical scholar David Instone-Brewer argues for the more liberal interpretation, contending that there are invisible quotation marks that would have been understood in Jesus' day.

My interest here is not in the main argument, but the response to it. David van Biema, writing in Time, reports that reader response to the Christianity Today article was initially highly negative, but leveled off at 60% opposed to the more liberal reading, 40% for.

Letters to the editor are never a scientific survey. But this split strikes me as about the likely proportion of traditional and more liberal views on divorce among evangelicals.
Posted by Gruntled at 2:04 PM 5 comments:

Warren Jeffs' Sentence is the Best of a Bad Deal

Warren Jeffs, the leader of a fundamentalist Mormon sect, was sentenced to five years for conspiring to rape a minor. His part in the conspiracy was to order a 14-year-old girl in the sect to marry her 19-year-old cousin. Such is the nature of cults that his order, backed by a threat of damnation, was enough to make her do it. She later left the cult and has helped prosecutors make the case.

This is an iffy use of the rape law, as I have argued before. Still, the guy needed to be stopped. In prison he has tried to kill himself. He says he is not worthy of the Mormon priesthood. Perhaps some of the members of the cult who were on the edge of leaving may be freed of their thrall.

The history of extreme oppositional cults, though, suggests that most members will see this sentence as confirmation that the forces of evil, including the government, are conspiring against them.

Perhaps Jeffs himself will have a prison repentance.
Posted by Gruntled at 6:19 PM 2 comments:

The Garcias are Here; Can the Nguyens Be Far Behind?

The Census Bureau has released the most common surnames from the 2000 Census. This brought a wave of stories about the appearance of Hispanic surnames -- Garcia and Rodriguez -- in the top ten for the first time.

I think the Americanization of Spanish names is a great thing -- proof of the great assimilative power of America. And I know that the WASP names that make up the rest of the top ten include the most wonderful mix of ethnic backgrounds. The list would already appear much more diverse if it had not been common for immigrants to Anglicize their names a century ago. My ancestors Sherstinki, for example, chose to become Sherry at Ellis Island. Immigrants these days are less likely to change their family names.

The Hispanic names are only likely to rise on the common name list, given the massive and continuing immigration from Spanish speaking lands. Just outside the top ten are Martinez (12), Hernandez (16), Lopez (22), and Gonzalez (24).

I wondered where the Asian names are on the list. This is trickier, since transliteration means that some Asian names are written in the English way, obscuring which heritage is represented. This is most important on this list for Lee (23), which is both a common English name (Robert E. Lee) and a very common Chinese name, often written Li; in fact, with all its variants, Li/Lee is the most common surname in the world.

The first clearly Asian name on the list is the leading Vietnamese surname, Nguyen (58). The next is the dominant Korean name Kim (110). The Indian Patel (158) and the Vietnamese Tran (189)round out the top 200. Whether these names will ever reach the top ten American surnames depends on the vagaries on immigration. We probably will not have another wave of Vietnamese boat people; we probably will have a steady stream of Indian and Chinese students and high tech workers.

I think the diversification of American surnames is all to the good. Go Melting Pot! E Pluribus Unum!
Posted by Gruntled at 11:35 AM 2 comments:

So it is particularly interesting that when Kentucky Baptists were asked if a person sincerely seeking God could obtain eternal life through a non-Christian religion, only 45% disagreed. That is, less than half clearly took the official Baptist position that salvation is only possible through Jesus. The article does not make clear how many of the remaining 55% actually embrace the pluralist position, and how many didn't know what they thought. Lifeway Research, which conducted the study, has not yet posted the results.

Still, it is remarkable that this key claim of orthodox Christianity can't muster even half the respondents' assent in a conservative evangelical denomination.