Oh, No - Penguins in My Whisk! 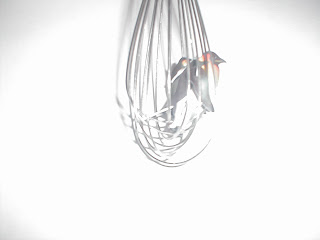 I am visiting with my sister, the mother of the famous twins who have appeared in these posts. She was cooking as we were chatting. She reached into a drawer for the next tool. "Oh no," she cried, "there are penguins in my whisk! The terrible people I live with have put penguins in my whisk!" And laughed an experienced mother's laugh.

I helpfully removed the small plastic penguins from their whisk-prison, and the cooking proceeded.
Posted by Gruntled at 6:57 AM No comments:

Marriage is the Solution to the Black Fathers Problem

Wade Horn gives an overview of programs that aim to involve poor black fathers in their children's lives. The bad news is that it is hard to find these fathers - half the mothers don't even know where they are - and it is even harder to keep them in the program, which they regard as a trick to get them to pay child support. Peer support programs don't work well, since their peers are not reliable, either. Improving visitation doesn't help, since they don't have much authority with the children. Getting absent fathers to cohabit doesn't help, because they are likely to disappear, which is even worse for kids, and 2/3rds of the kids in the house are not theirs, anyway. Horn concludes that fatherhood programs need to do what they have been afraid to do: promote marriage.

Which leads to the main conclusion of Enola Baird, a crusader for black marriage. She goes so far as to say that marriage was the great right that slaves gained with freedom. Marriage is the foundation of successful black families - as it is for other families.

Closing the marriage gap would do the most to close the racial gap. Then we would not need a conference on the problems of black fathers.
Posted by Gruntled at 7:33 AM No comments:

In Child Poverty, The Marriage Gap is Even Bigger Than the Race Gap

So says Maggie Gallagher in her fine chapter in Clayton, Mincy, and Blankenhorn's Black Fathers.

How are these two rates connected? African Americans are much less likely to marry than whites, or any other racial ethnic group. Worse, poor black men are two to three times more likely to father children than other poor men are.

If the black and white marriage rates were the same, most of the racial poverty gap would disappear. The marital poverty gap, on the other hand, is not likely to close.
Posted by Gruntled at 9:56 AM 3 comments:

William Julius Wilson has been arguing for years that the low black marriage rate, and all the bad things that follow from it, is mostly because low-skilled, family supporting jobs disappeared from the northern cities at the just the time that African Americans migrated there in great numbers. Not having jobs that would support families, black men did not marry, and black women did not marry them. Wilson has never had a good explanation for why poor black women kept having children with men who could not support the children. Still, his structural account of why the black experience would be different from that of other immigrants has been a powerful answer to more cultural explanations.

In a more recent study, in Clayton, Mincy, and Blankenhorn's Black Fathers, Wilson extends his long-running studies of poor people in Chicago. Now he give comparative work and marriage rates not only for black and white men, but also Mexicans. This poses a problem for his basic argument about the black marriage rate. The Mexican immigrants are no better educated than the black natives in the poor parts of Chicago, and so have no better access to family-supporting jobs. Yet Mexican men are more likely to respond to their girlfriends' pregnancy by proposing and seeking some kind of job. Most poor black fathers, by contrast, do not pursue marriage. Indeed, Wilson reports that what all the poor mothers want from the fathers of their children is that they support the family and be faithful; the black men regard this desire as unreasonable.

When Wilson was comparing poor African Americans in the city today with poor Italians, Poles, Jews, etc. of yesteryear, his structural argument (work disappeared) could be persuasive. Now, though, when poor African Americans and poor Mexicans in the same city at the same time report quite different marriage rates, and therefore quite different male employment rates, his structural argument clearly has a cultural hole in it.
Posted by Gruntled at 10:41 AM No comments:

Men Earn More If They Think Men Should Work

This headline sounds like a truism, doesn't it? Yet the researchers I will be arguing with, Timothy Judge and Beth Livingston of the University of Florida, think there is another reason: sexism.

The researchers believe that someone must be unfairly paying men with traditional views more:

This implies that traditional men are rewarded in the workplace for seeking to preserve the social order, whereas traditional women seeking to do the same are not necessarily penalized.

I think there is a major flaw in the question they asked, and a simpler explanation for the income gaps. The flaw is that they asked about the ideal division of labor between men and women, rather than between husbands and wives. The way the question is framed, however, implies that what they really mean is men and women in a married (or at least cohabiting) household. Neither do they make clear whether there is a difference between the single and married people in their responses - which there should be if the question is implicitly about married people's behavior.

The simpler explanation of their findings, I think, is that men who are husbands and fathers are more likely to think that it is their job to earn more for their families, so they seek industries, jobs, and assignments that maximize what they take home to their families. Men who are not husbands and fathers, or who do not think it is their job to earn more for their families, will not seek higher paying jobs if it means working harder, longer, or further from home. Likewise, women who are wives and mothers are more likely to forgo some earning opportunities in order to spend more time with their families, either breaking up their careers for small-child-related spells or investing less in their careers all along. Either way, married moms acting the way married moms usually do are likely, on average, to be making less than other women.
Posted by Gruntled at 10:27 AM 4 comments:

88% Happy in Their Marriages

Parade magazine published its marriage poll this week. I am grateful to anyone who does family life polling, and I know Parade magazine has a greater readership than all the sociology journals on earth combined. The results of the Parade survey are very heartening. The great majority of married people are happy in their marriages. 71% are deeply in love, 73% are happy with the companionship of their marriage. Three quarters found their sex lives fulfilling. Over half would definitely marry the same person again. Half said they were loving and joyful - beat that with any other institution.

My only gripe with the Parade survey is that they don't lead with the good news. They lead with political adultery. The pull quotes all suggest scary mysteries. The highlighted stats all have a prominent zinger.

The good news about marriage is that most of the news is good. Sing it.
Posted by Gruntled at 3:42 PM No comments:

The Starting Point of the Creation/Evolution Discussion

Gallup has been asking representative samples of Americans since 1982 which of these three options comes closest to their own view:

God created man pretty much in his present form at one time within the last 10,000 years. [Creationist view]

Man has developed over millions of years from less advanced forms of life, but God guided this process, including man's creation. [Theistic evolution]

Man has developed over millions of years from less advanced forms of life. God had no part in this process. [Naturalistic Evolution]

Think of how you would answer this question.

Then estimate what percentage of Americans would choose each of these options.

The actual responses of American have remained pretty stable over the past quarter century. Here are the typical percentages:

Most people are surprised at this distribution. Most educated people, in particular, have a hard time accepting the idea that half of Americans would take the young-earth creationist position over other views.

I am impressed at how large the middle position, the theistic evolution position, is. If you force people to choose between creation and evolution, most people in a religious country will choose creation. If you give people a middle option, a sizable number will choose that. The constituency for naturalistic evolution, by contrast, is the same size as the constituency for "no religion."
Posted by Gruntled at 1:46 PM 6 comments: