Facing Up to Bullies as a Class Exercise

Steven Pinker, in The Better Angels of Our Nature, emphasizes that there has been a massive reduction in violence in the world because, in part, we have developed skills and habits such as self-control and sympathetic compassion.

One of the sources of collective violent acts come when groups do bad things together even though the members of the group individually think it is wrong. This comes about from what positive psychologists call "pluralistic ignorance" - each thinks the others all agree. Moreover, the effect of pluralistic ignorance is multiplied if there are a few enforcers in the group, insisting that everyone follow the group line. And the irony of enforcers is that they themselves often don't really believe in the bad action the group is doing. Instead, they are trying to convince other people of their sincerity.

So this is my idea, and also my question to you. I want to develop a class exercise in my "Happy Society" class to help students practice speaking up for conscience, even in a group of friends. This kind of practice is especially important because most of their friends probably have the same pangs of conscience, but are held back by the pluralistic ignorance of what the others really feel.

One example Pinker cites is that most students actually do not think binge drinking is good or fun or what they really want to do. Some students in the class are likely to find themselves in a situation where they can speak up against an impending binge drinking game. And, no doubt, there are other, similar situations that arise in ordinary life.

I would welcome ideas on how, exactly, to help students develop the capacity to pierce pluralistic ignorance.
Posted by Gruntled at 11:21 PM 3 comments:

The great genocides and wars of the early twentieth century were made much worse by the specific individual leaders Hitler, Stalin, and Mao.  The movements toward fascism and communism might have happened without them, but these movements would surely have been less bloody.

In reading Steven Pinker's The Better Angels of Our Nature: Why Violence Has Declined, I was struck by a parallel thought: the great reduction in violence of the late twentieth century was made much better by the specific individual leaders Gandhi and King.  The movements toward independence and civil rights might have happened without them, but these movements would surely have been more bloody.
Posted by Gruntled at 2:30 PM 2 comments:

The "New Peace" of the Past Generation is a New Blessing

Yesterday I wrote about Steven Pinker's account of the long peace we have enjoyed for the two generations without a major great power war, in his new book, The Better Angels of Our Nature: Why Violence Has Declined .

Pinker goes on to what he calls the "new peace" - the decline in the past one generation of civil wars, low-intensity conflicts (warlords, raiders, gangs), terrorism, and, most importantly, genocide.

What reduces all of these intrastate forms of violence are effective states. The effectiveness of states is increased by democracy, open markets, and involvement in international organizations, including peacekeeping.

Effective democratic states are the best at reducing all of these forms of violence.  Effective autocratic states are somewhat effective in preventing these forms of violence - unless the state itself is the cause of the violence, as it usually is in genocide. The biggest danger arises from failed or ineffective states, which become power vacuums and safe harbors for civil war, warlords, and terrorists.

It may seem that terrorism has obviously risen in the last generation, which includes the 9/11 attack.  That one attack was indeed the single biggest act of terrorism in generations.  But the incidence of terrorist attacks has gone down since the '60s and '70s. Terrorism is very hard to do effectively, almost never achieves its objectives, and usually undermines whatever support it starts out with the more terrifying it is.

It is too soon to tell if the new peace will also be a long peace.  But the new forms of conflict do not come close to producing the same quantity of violence that the great-power wars used to create.

Things are getting better. We may rejoice in that.
Posted by Gruntled at 10:50 PM No comments:

As I study what makes for a happy society, I am struck again and again by two related points:

Many many conditions of life are much better now than they ever have been, and are getting better; and

Most people, and especially most intellectuals, are unwilling to believe that this is so.

To be sure, there have been and are smaller wars, and even a few medium sized ones.  But the Great Powers have not fought a war with one another since the Korean War, and arguably not since World War II.

Steven Pinker, in The Better Angels of Our Nature: Why Violence Has Declined, makes this remarkable point:

As of May 15, 1984, the major powers of the world had remained at peace with one another for the longest stretch of time since the Roman Empire. Not since the second century BCE, when Teutonic tribes challenged the Romans, has a comparable interval passed without an army crossing the Rhine.

Trying to Manipulate Women is Wrong. And Dumb.

I don't usually fuss about things, but I think this is evil for what it means to say about women.

The Molson company should be ashamed of itself. 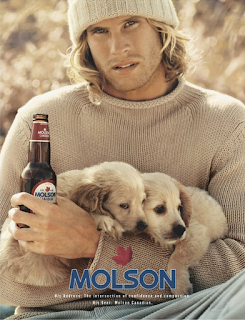 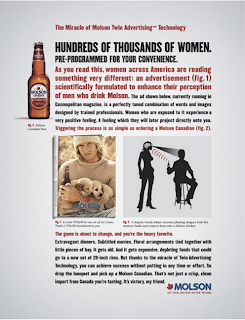 Most Young Japanese Adults Are Single

Almost two thirds of Japanese men in the prime marriage years, 18 - 34, are single.  Almost half of women in the same age are single, too. A quarter of them say they are not looking.

Thanksgiving is a Holiday of the Civil Religion

Thanksgiving is derived from the Christian religion, but is not a Christian holiday.  Nor is it a Judeo-Christian, or Biblical, or Abrahamic, or holiday.  It is a holiday of giving thanks to God, so it is, in the very broadest sense, theistic.  Mostly, though, it is a National holiday, a holiday of the American civil religion.

I think it is normal for people to want all their religions to line up and support one another - our spiritual faith, our civil faith, our community faith, our family faith.  But I think it is safe to say that for everyone, they do not line up with one another all the time.  For Americans, living in an increasingly diverse society, the opportunities for conflict between our several religions - especially that devoted to God and that devoted to nation - become increasingly likely.