In college I read and acted in the strange but moving play, "Waiting for Godot." The best analysis I read of it held that it took place on Holy Saturday, the day between Good Friday and Easter - endlessly.

That day is today. Somewhere, Didi and Gogo are waiting, waiting, for God(ot).
Posted by Gruntled at 8:11 AM 2 comments: 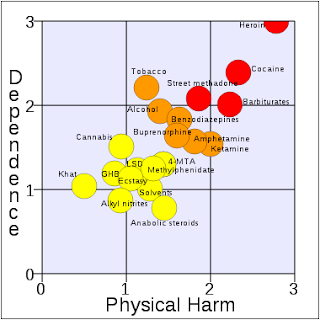 We have tried to prohibit a broad range of drugs that some people like to take. Some drugs are so dangerous to the people who take them and to the rest of society that the attempt to prohibit or very tightly regulate them is worth doing.

We have also learned the hard way that some drugs are so popular with a large minority of the population that we simply can't prohibit them. Alcohol has been a recreational drug of choice in every society that figured out how to make it from prehistoric times. It causes some terrible social problems directly, and is involved in nearly all other social problems indirectly. Almost every family has an alcoholic in the family tree within a few generations' span. Tobacco is a hugely addictive drug that holds a quarter of the population at any one moment, and has had a grip on more than half the population over time. Tobacco is the leading killer in America.

I take it as a premise that it would be socially impossible to ban alcohol or tobacco. Thus, the best social option is to regulate and tax it. Heavily.

My first standard for a social policy on drugs is "Is it worse than alcohol for society?" When people use it regularly, including that minority who will become heavy users, is the danger they pose to society no worse than the danger we already face from alcohol use? Given how dangerous alcohol is, that is a pretty easy standard for most drugs to meet.

My second standard for social policy on drugs is "Is it worse than tobacco for its users?" When people take an addictive drug, including that minority who become heavily addicted, is the danger they pose to themselves greater than the destruction we already face from tobacco use? Given how destructive tobacco is, that is a pretty easy standard for most drugs to meet.
Posted by Gruntled at 6:26 AM 2 comments:

Not Sure About Narcotics

Painkillers derived from opium, like morphine, are very useful drugs. But the natural narcotics, and their synthesized cousins, like heroin, have the worst sociological effects when they are abused. Narcotics as so dangerous because they are so addictive.

Still, heroin is so addictive, and does gradually destroy its addicts.

So how should it be treated? I don't have an excellent answer here. I think full legalization, regulation, and taxation is not enough social control. But full prohibition is not quite appropriate, and isn't working very well. What we need, I think, is a new legal category, something like a voluntary ward of the state, for people who choose to be heroin addicts. They would get a steady supply of the drug, which would be regulated for purity in the usual way. They would be kept from crime to support their habit. In exchange, they would be required to do socially useful work in their limited number of functional hours. And addicts would be given every help to quit.

This is not a great solution, but it is better, more proportionate, than what we are doing now.
Posted by Gruntled at 8:54 AM 5 comments:

Some Drugs Should Stay Illegal

Crack is really bad. Cocaine makes people act crazy and dangerous to others. Meth destroys you. The stimulants, in general, seem to have really bad consequences for the people who take them and to those around them.

I take a stimulant every day, as do most Americans, in my morning coffee. Caffeine is a mild stimulant when taken in organic doses - the amount in a handful of coffee beans, for example. I expect that if I snorted purified caffeine, bad things would happen. The same is true of the other stimulants. South American Indians have been chewing coca leaves for ages. East Africans chew a leaf called khat, with similar stimulant effects. In organic doses, stimulants can be helpful.

Chemistry makes it possible to extract the purified stimulant and take it in unnatural and dangerous doses. They are also hugely addictive. And the chemical stimulants, like meth, are scary in the effects of their high and in how quickly they destroy addicts.
Posted by Gruntled at 6:36 AM 2 comments:

Legalize the Hallucinogens, Too

While we are reforming the drug laws, I think we should legalize the hallucinogens, too.

Nonetheless, the people on hallucinogens are rarely dangerous to others, and the drugs themselves do not seem to be addictive. They don't, as far as I have read, have many other side effects. Some drugs that do seem dangerous, like PCP, are sometimes classed as hallucinogens. If we ever get down to cases we can argue the safety of each drug.

Let the FDA regulate them for quality. Tax them. Use police resources for something else.
Posted by Gruntled at 9:24 AM 1 comment:

Marijuana is No Worse Than Bourbon

I think the time may finally be ripe to legalize marijuana.

Let me say clearly that I do not use it. I think it makes people act stupid. I see no appeal in it personally. And my kids would still be in big trouble if they used it.

I feel pretty much the same way about bourbon.

I think "sin taxes" are a good idea. When we legalized, regulated, and taxed alcohol production, the product got safer, most of the criminals were driven out of the business, and the state got lots of revenue. The same would happen with marijuana.

Legalize pot now. And tax it hard.
Posted by Gruntled at 2:36 PM 17 comments:

Bright Idea at the Posse Retreat

I just got back from the Posse Plus Retreat. Posse is a scholarship program that sends a group of students from the same city (Boston, in Centre College's case) to college together as a mutual support group. Each spring all the posses (there is one group admitted each year) host a retreat for a larger group of students, faculty, and staff. It is always a great retreat, full of good talk, bonding, hilarity, and usually one Bright Idea. One that seems bright to me, anyway.

Right now the college offers the Centre Commitment. We promise that the college will make it possible for each student to study abroad, have an internship, and graduate in four years. If we fail, the student can have another year, on us.

We came up with a possible fourth plank for the Centre Commitment: We promise that the college will make it possible for a student to graduate with no more than $10,000 of debt.

This is just in the workshop stage, and no one with the power to make it so has bought into it yet. I think, though, that it would be a popular idea, and fits with the spirit of the rest of the Centre Commitment.

I will let you know if this notion bears fruit.
Posted by Gruntled at 2:31 PM 4 comments: