Why Were the Fifty-Somethings the Least Likely to Leave Religion? 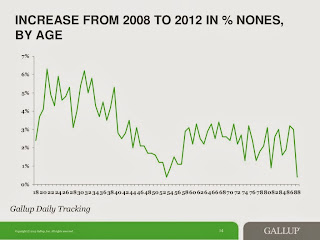 The Pew Religion and Public Life project hosted an excellent discussion of what the increase in religious 'nones' (people who profess no religion) means.  One of the tables presented plotted the increase by age from 2008 to 2012.

The main point is that the young are more likely to now say they have no religion than are the old.

What struck me most, though, was the trough right in the middle of this chart: people in their early 50s were the least likely to say they had become less connected to a religious institution in that period.

I do not have a good explanation.  I do have one hypothesis to offer, and maybe two.

First, this age group is on the cusp between the Baby Boomers and Generation Xers, between inflated rhetoric and 'just do it.' Being able to partly identify each way, perhaps we are willing to give the church, the land of inflated rhetoric, another chance to just do it in making a better world.

Second, this is exactly the age group of President Obama (b. 1961).  The people most likely to say they had no religion are young Democrats. Perhaps Democrats of the president's cohort are less likely to give up on religion when they see him stay with the mainline church that gave his life direction.