How to Keep Welfare from Undermining Poor Marriages

David Schramm, a University of Missouri researcher, compared two kinds of poor families (making less that $20,000 per year): those who took welfare, and those who did not.

Those who did not take welfare had happier marriages.

Schramm is not sure why.  He thinks it is because work is valuable in itself, and unemployment is undermining, especially for men.  He acknowledges, though, that the welfare recipients might be different - drug addicts or mentally ill, perhaps.

I can see how taking welfare would be undermining, especially for men.  It may be necessary in emergencies to keep your family afloat, but that doesn't mean it is without cost.

There is a wonderful scene in the movie "Cinderella Man," in which a boxer during the Depression is obliged to take relief to feed his family.  He is deeply ashamed of taking charity, but does what his family needs.  Later, when he is successful and famous as a boxer, he turns up in the relief line again. The people in the line know who he is, and are surprised to see him there.  Their faces show that they think he may be cheating the system, taking when he is not really in need.  However, when he gets to the head of the line, he delights the crowd: he pays back all the welfare he took.

That might be a good model for how to keep your self respect on welfare:  make a real plan to pay it back when you are on your feet again.
Posted by Gruntled at 6:16 AM No comments:

Fertility Drops With the Economic Recession

The CNN report I cite for these figures cheerfully opines that "we aren't going to run out of people soon." However, we could start to run out of people, especially young workers, in we do not have enough babies now. The U.S. is probably OK, but all other industrialized nations are showing similar fertility drops with the recession, and they were in a deep population-trend hole to begin with.

If we want 20 year olds twenty years from now, we have to have them now. By then it will be too late.
Posted by Gruntled at 8:29 PM No comments:

The Governor Serves All the People, Including Hindus

Governor Steve Beshear took part in a ribbon-cutting ceremony for a packaging film business that promised to bring 250 jobs and $180 million investment to a Kentucky town. This is what governors do.

Since the firm is run by Hindus, they had a Hindu blessing ceremony. The governor joined in, as governors usually do at all kinds of local ceremonies. The governor graciously said "While I can't say for sure that this is the first time that a boomy pooshim ceremony has been performed for a business on Kentucky soil, I can certainly say that I don't want it to be the last one."

David Williams, Senate President and Republican candidate for governor against Beshear, attacked Governor Beshear for "idolatry." "To get down and get involved and participate in prayers to these polytheistic situations, where you have these Hindu gods that they are praying to, doesn't appear to me to be in line with what a governor of the Commonwealth of Kentucky ought to be doing."

Note that Senator Williams did not object to the governor participating in a religious ceremony or promoting a business run by religious people.

This may be why Senator Williams did not criticize Governor Beshear for promoting the Ark Park, a Christian theme park planned by the same ministry behind the Creation Museum. The governor promoted that project, too, for the jobs and investment it would bring. He was criticized from the left, but in that case they were objecting to the state promoting any religion.

The governor of Kentucky is governor of all the people of Kentucky, not just the Christians. His jobs requires him to promote just about any economic development of the commonwealth, especially now. And I applaud Governor Beshear for being cosmopolitan enough to embrace the rituals of Hindu citizens as he embraces the rituals of his own Christian practice.
Posted by Gruntled at 6:23 PM 4 comments:

India Will Pass China in the Next Generation 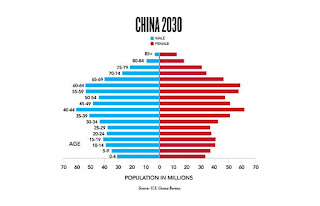 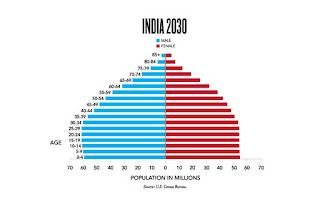 These two demographic projections come from The Sustainable Demographic Dividend, by Brad Wilcox and Carlos Cavallé.

What they mean is that, in the next generation, China will not have the people to sustain its economic boom.  India will.
Posted by Gruntled at 5:29 PM No comments:

Demographers estimate the seven billionth person was born yesterday. This is wonderful news.  People are great.  People are one of the very best parts of Creation.

CBS news estimates that the typical person - the one with the most common features on several measures - is a 28-year-old, Mandarin-speaking, Han Chinese, Christian man.

The UN estimates that the seven billionth person was probably born in India.

Some lament our growth to seven billion people.  They think more people just means more problems. And of course there are problems in the world, which we should keep working to solve. But our economy, political system, culture, and even-the human-shaped environment all exist to serve people - not the other way around.

Some worry that we will run out of resources.  I do not.  This has never happened, and is never likely to.  We are a problem-solving species.  We respond to challenges with ingenuity.

Cherish the seven billionth person.  Cherish the average person. Cherish your own people.
Posted by Gruntled at 11:21 AM No comments:

Wisdom is Best Taught in a Small Liberal Arts College

The final fruit of the "Wisdom and the Liberal Arts Conference" at Baylor University for me is that wisdom is best taught when a small group of students work with a wiser guide through great texts and with great examples to develop in themselves habits of wise judgment.

The several plenary speakers from large research universities lamented the "crisis of the humanities" which prevented "the academy" from doing this anymore. Several were famous and got invited to speak because they had written books about this crisis. Others, less famous and from less august universities, lamented how professional and vocational training was driving out the inculcation of wisdom through the liberal arts.

Yet what they described as the ideal circumstance for teaching wisdom sounded to me like the ordinary condition of a small liberal arts college.

And the irony was that the speakers issuing these laments did not have time to teach that way themselves because they had to spend all their time writing books - including the ones lamenting the decline of teaching wisdom.

Once again, I go home to Centre College thinking that the grass in greener in Danville.
Posted by Gruntled at 9:11 AM 2 comments: