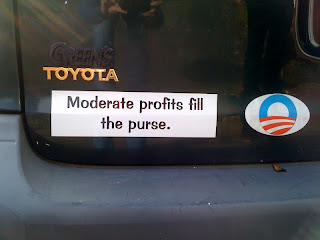 I am adding a new sticker to the Gruntlwagon each Saturday.

This one was described as "an Italian proverb."
Posted by Gruntled at 10:51 AM No comments:

Lynn Stout, in Cultivating Conscience, offers several reasons why we do not credit how often people act on conscience.

These two struck me as the most interesting.

1) We discount our own prosocial acts because we know that we do not always have altruistic feelings. Stout emphasizes, though, that the prosocial acts are what benefit society. I would say that in a well-ordered society, the laws and many of the acts that benefit me are in line with conscience. All three motivations - following the law, seeing how helping others helps me, and following conscience - are normally all mixed together in our feelings and motivations.

2) The banality of goodness: it is so common that we do not notice it. In particular, we do not notice the many acts of passive altruism - the ethical restraint of not doing bad things even when it might be in our material interests to do so.

Posted by Gruntled at 9:07 PM No comments:

Lynn Stout, a law professor at UCLA, has written a very interesting happy society book, Cultivating Conscience. I blogged about it yesterday.

Stout's key claim is this:

“conscience is triggered primarily by three particularly powerful social cues: instructions from authority; beliefs about others’ unselfishness; and perceived benefits to others.”

These cues to conscience work because they map on to the powerful human emotions of obedience, conformity, and empathy.

We already have a conscience. We can shape social structures to nudge that conscience into action. We can do this by:

Stout notes that there is one caveat: we act unselfishly toward others if we perceive that the cost is not too great to ourselves, compared to the benefit that others receive.

I think it is very helpful to the happy society to simply know that most people do act for the good of others all the time. We can make society better and happier by just clearly showing what is already happening.
Posted by Gruntled at 7:57 AM 2 comments:

Lynn Stout, a law professor at UCLA, has written a very interesting happy society book, Cultivating Conscience. I will blog it over the next few days.

Her main point is that law, and many other social science and social policy disciplines, have been infiltrated by the idea that people are like the imaginary homo economicus - selfish profit-maximizers who only care about others or about society only if they rationally calculate that their self interest is involved. Stout says that law, especially, has been driven by Oliver Wendell Holmes, Jr.'s, theory that law should be made from the perspective of the "bad man" who does not care about others or the common good.

This leads me to see that when making social policy for the happy society, we can not ignore homo economicus. As Stout points out, some people are primarily self-interested profit maximizers, to the point of cheating and exploiting others. Some are just psychopaths, and others have taken too many classes in which they were told that rational people ought to be selfish. But most people are conscientious. Most people are at least "passive altruists."

Social policy, therefore, should be built to contain and discourage homo economicus.
Posted by Gruntled at 12:09 PM 3 comments:

For Poor Kids, Family Instability is Worse Than the Poverty

Most poor city kids are born to parents who are not married. Half of those parents say they will marry. But only 15% actually do. For the rest, most lose contact with their fathers. If mom has kids with a different man, dad is likely to be gone for good.

I think this is the bedrock of why poor neighborhoods are a tangle of pathologies. As Kay Hymowitz says, the instability of their homes is more damaging to poor children than the poverty.
Posted by Gruntled at 7:21 AM 3 comments:

Wendell Berry favored Centre College with a fine reading of some of his poetry and a short story tonight. He will be meeting with students tomorrow, and then the Danville community at the public library.

It is hard to classify what kind of thinker he is, exactly. He has described himself as "an artist, of sorts, and a farmer, of sorts." He is a kind of agrarian social thinker, and an environmental activist in Kentucky.

When encouraging students to come to the convocation, I described Wendell Berry as Kentucky's leading intellectual. I have been thinking about this since I said it. I still think it is true. But I would welcome some critical thought and comment on the subject.
Posted by Gruntled at 10:27 PM 10 comments:

The best news of the day is that the Burmese dictatorship released Aung San Suu Kyi from house arrest. This may be the long-awaited Mandela Moment, when the regime finally starts on the path to the transition to legitimate government.

I am not counting on anything as certain, though. The Burmese junta is the most mercurial government in the world, in my judgment - even more so than the North Korean. They have let her out in the past, only to lock her up again.

One hopeful sign, though, is that the government does not seem to be insisting that the recent "election" proves that they are legitimate, and therefore the banned opposition party does not have to be permitted again.

Aung San Suu Kyi is one of the shining lights for democracy in the world. It is a great day that she can walk free again.
Posted by Gruntled at 8:47 PM No comments: