The other day I argued that "The only thing we have to fear are fearmongers themselves." Loyal reader Brendan sent me the appropriate xkcd strip (the favorite comic of the knowledge class).  This hits the nail on the head: 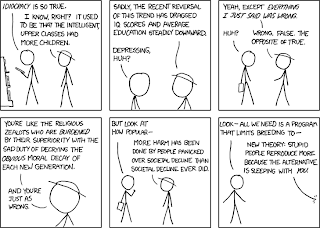 The Tea Party is for a Less-Intrusive State

Yesterday I wrote about the Occupy Wall Street movement.  I was asked, reasonably, by an anonymous reader to offer an equally even-handed treatment of the Tea Party.

The Tea Party movement, like Occupy Wall Street, began as street theater.  I don't care for political street theater, but I am glad that in a free country the people who like to do that sort of thing can do so.

The main thing the Tea Partiers are mad about is the government telling them what to do and taxing them to do things they did not approve of.  I read the core of the tea party movement as libertarian, rather than social conservative, though there is clearly overlap.  This is not a movement to limit abortion, for example.  Nor is it a movement that is against large government expenditures or even deficits as such.

The "tea baggers," as they originally called themselves, did not mobilize when the federal government ran up giant deficits to pay for the wars of the 2000s.  Instead, they mobilized against the expenditures to cover the costs of poor-risk mortgage holders and people with no health insurance - people the tea party regards as feckless, irresponsible, and not their problem.

Some of my liberal friends regard the tea partiers as simply selfish.  I think this view is mistaken.  Of course there are some people who are opposed to social responsibility as a whole, and naturally some of them will be drawn to an anti-government protest. I do not think, though, that social irresponsibility is the core of what the protest is about.

The Tea Party wants the government to take less and tell citizens what to do less on behalf of irresponsible people. I think this position is not sufficient to make a good social order.  But the Tea Party position is a legitimate part of the argument about how to make a better society.
Posted by Gruntled at 11:54 AM 5 comments:

The Occupy Wall Street movement is mostly theater.  I don't care for street theater myself, but in a free country I appreciate that the people who like that sort of thing should be able to engage in it.

The main thing they are mad about is that Wall Street traders were the main cause of the collapse of the world economy in 2008.  They were able to do that because they had increasing pressure to make short-term profits, and because the agencies that were supposed to keep an eye on them to prevent exactly this type of collapse were feckless and timid.  In the years following the actions of government regulators have improved somewhat, but the actions of the Wall Street traders show that they have learned little from their mistakes.

I believe these criticisms are true and just.  I see the core of the Wall Street protests as against corporate greed and for greater regulation.  I agree with that.

A friend thought it was hilarious that the Wall Street occupiers stopped for a moment of silence for Steve Jobs.  In his mind, the Wall Street occupation is against capitalism, and therefore it was ironic for them to honor a capitalist.  I think this view is mistaken.  Of course there are some people who are opposed to capitalism as a whole, and naturally some of them will be drawn to an anti-Wall Street protest.  I do not, though, think that anti-capitalism is the core of what the protest is about.

Occupy Wall Street wants more responsible and better-regulated capitalism. So do I.
Posted by Gruntled at 12:36 PM 7 comments:

The Long Arc of Mainline Protestantism and Print

As is well known, printed books and Protestant religion were born together.

Now, Mainline Protestantism and print journalism seem to be declining together.  Both are primarily the province of educated old people who like to get their information by reading.

This parallel was offered half seriously, but the group agreed there might be some meat in it.
Posted by Gruntled at 8:52 PM 1 comment:

I made a trip to Storrs to visit with University of Connecticut sociologist Brad Wright.  Brad wrote a gruntled book, Upside: Surprising Good News About the State of Our World.

Yet there is no sociology of how things get better.  Sociology is best at criticism. When some area of social life starts getting better, sociology either focuses on how that practice still falls short of utopia, or moves on to another problem.

Focusing on problems is a defensible strategy if your aim is solely to solve problems. But seeing only the problems gives you a distorted view of reality - and surely no science wants that.

Focusing on problems is not simply erroneous and one-sided.  Thinking only of problems and fears undermines happiness. A happy society needs a science that appreciates improvements and our ability to solve problems, too.

Now, as you can see, I am offering a criticism of sociology's tendency to criticize.  So that this observation is not simply fussing (and ironic), let me point out that sociology is, at its deepest level, committed to truth.

Sociology needs a proportionate focus on improvement, as well as on problems.