I Am an Etsy 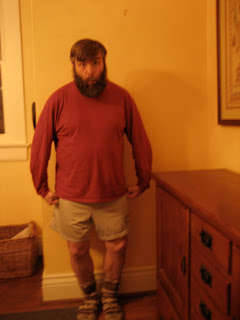 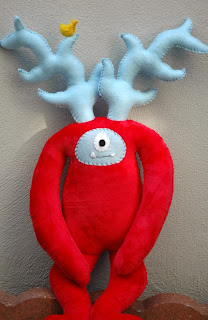 Diane Koss makes plush monsters and sells them from Cutesy but not Cutesy on etsy.com. She asked our mutual friend Rob to tell her about some people he knew with a few facts about them.

I am humbled and honored to be an etsy. I will try to live up to the role.
Posted by Gruntled at 3:47 PM 3 comments:

Regular reader Black Sea sent this wonderful response to one of my earlier posts. I thought it too good to leave in the Comments tail.

This bit of pop trivia may interest you. I was this morning watching on Youtube the video of Bryan Ferry's 1985 song "Slave to Love," when I noticed something rather remarkable. (Actually, it was pointed out by one of the Youtube commenters.)

I'm sure some people will find this trite or sentimetal, but as the father of two young daughters, I have to say that it struck me differently. Of course, it probably helps that I think Bryan Ferry more or less defines the word "suave."

Posted by Gruntled at 7:18 AM No comments:

When welfare reform was passed in 1996, Pres. Clinton compromised to get conservative votes by including funding for abstinence-only sex education programs in schools. As Sarah Kliff shows in the October 27th Newsweek, abstinence-only programs have now fallen on hard times.

This strikes me as an illustration that our government is not broken, but actually works pretty well. Both welfare reform and abstinence-only education became law by the normal kind of political compromise. More than a decade later, we are continuing welfare reform because it works. And we are discontinuing abstinence-only sex education because it doesn't work.
Posted by Gruntled at 8:40 AM 10 comments:

Marriage is Not a Luxury Good, But a Transformative Practice

Two of my fellow sociologists, Laurie Essig and Lynn Owens, offer an attack on marriage that is fairly typical of what they call "critical" sociology. They view marriage as a kind of magic that the privileged add to themselves. They conclude that

When there is broad, seemingly unanimous support for an institution, and when the institution is propped up by such disparate ideas as love, civil rights and wealth creation, we should wonder why so many different players seem to agree so strongly. Perhaps it’s because they are supporting not just marriage but also the status quo.

This is almost completely backward. Marriage is a formative institution. We make ourselves and our society more loving, equal, and richer through marriage because marriage leads people to act differently - especially men. The worst off groups are the least married. This is not because marriage is a luxury of the best off. It is because people who don't make the transformative commitments of marriage tend to end up badly off. And what is likely to individuals is nearly certain for groups.

When there is broad, seemingly unanimous support for an institution, and when the institution is propped up by such disparate ideas as love, civil rights and wealth creation, we should wonder why so many different players seem to agree so strongly. Perhaps it’s because they are trying to build up civilization and benefit everyone.

There has been some back and forth about whether kids make parents happy or unhappy. A new study in the Journal of Happiness Studies says that kids make married parents happier. This makes sense to me. Marrying and raising a family together as a deliberate and permanent status is a coherent, whole project. It is not each piece that may or not make a couple happy, it is the package.
Posted by Gruntled at 7:39 AM 4 comments:

This year is the semi-millennium of John Calvin's birth. My congregation has been celebrating with a three-week Sunday school session on Calvin and his legacy. Naturally, Presbyterians turn a birthday party into an opportunity for school.

I got to teach the third and final session this morning, on Calvinism and modern culture. I taught a whole course on this subject a few years ago, so I was brutally compressing a hurried term into a lightning-quick class.

We talked about the crucial role the Reformed tradition in creating democracy, the Protestant work ethic, science, and in general the "affirmation of ordinary life." This is exciting story, energizing to teach. The class was a rich one, and may lead to a longer course of study in the future.

The best part for me was articulating that the Reformed tradition has made a distinctive way of life out of an idea that is found in all Biblical faith - God made the universe as a great story and great task, in which we all have a part. God made a meaningful universe, as only God can. And God gave each and every one of us a life of work within that meaningful universe, work that is itself meaningful.

Thank you John Calvin for articulating that idea, decently and in order.
Posted by Gruntled at 4:23 PM 2 comments: