Koalas in the Trees 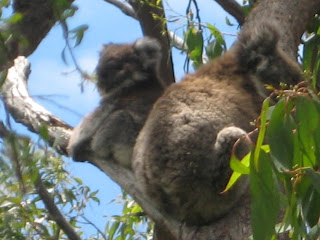 Today we drove the Great Ocean Road. We were fortunate to see a bunch of koalas in the trees along the road. I will add a picture tomorrow.
Posted by Gruntled at 6:30 AM No comments:

Radical Christians Are Not Radically Australian

Today we visited with a fine Christian ministry, Urban Neighbors of Hope. They work in poor and immigrant suburbs east of Melbourne. Their main task is to live the gospel of love with those who need it most. I had not realized that they were a project of the Church of Christ, a cousin to the American denomination of the same name. What was even more surprising for a church with such a Protestant heritage, UNOH has a semi-monastic initiation structure, vow, and commitment. They do allow, even encourage, marriage, which makes a huge difference in how a monastic life plays out. They require, though, that both members of a married couple join the community, or not at all.

UNOH produces community for people who want to live a life of radical Christian commitment. There are small Christian communities like it all over the world. This community was started by an Australian, but he and his family now run the international version of UNOH from a Bangkok slum.

It has been hard for almost every Australian we have met to explain what is distinctive about Australian national identity. I think it was particularly hard for the people in UNOH because their vision of Christianity transcends national identity as much as they can.
Posted by Gruntled at 7:22 AM No comments:

The Touchiest Australian Issue: How the Aborigines Were Treated

A central front in the Australian culture war is over the "stolen generations" of aboriginal children who were taken from their families and raised in mission schools, fostered out, or adopted out. Conservatives have contested whether the policy was really bad, as well as whether it was really as extensive as liberal scholars and ideologues have contended.

The initial aim of the policy was to take "half-caste" children, to use the 19th century term. The justification for the policy was that mixed-race children were not accepted in aboriginal communities. The schools and foster placements were designed to help them assimilate to mainstream (white) society. The policy was not, at least officially, directed toward children of aboriginal couples.

Today we took a fine "aboriginal heritage tour" sponsored by the Royal Botanical Garden in Melbourne. Our guide, Brian, talked primarily about the many uses aborigines made of the plants in the garden. He started us off, though, with his own story. "I am a member of the stolen generation" he began. He said that he, his brother, and his sister were taken from their mother when he was two. He was adopted by a white Melbourne family. He did not see his siblings for 30 years.

However the policy to remove some children from aborigine mothers may have been conceived, it sure feels like their lives were stolen to some of those children, now grown to adulthood.
Posted by Gruntled at 12:47 AM 3 comments:

Australia Was British Until the 1960s

It has been very hard for the Australians we have read and talked to to say with confidence when "Australia" begins. Part of the difficulty is that the political dates are not the emotional ones. 1788, when the First Fleet landed, is commemorated as Australia Day. Yet the fleet came to establish a convict colony -- not something that Australians want to celebrate, even today. 1901 is when the federated Commonwealth began, but the New Year's Day anniversary was just the bureaucrats' deadline to acknowledge a sense of unity that either already existed, or had not yet been achieved. Gallipoli, the World War One battle in which Australian troops fought bravely but futilely, is the emotional birthday of Australia, but is not politically significant.

What has been coming clear to me is that Australians thought of themselves as British into the 1960s. World War II caused a rude awakening to the fact that Britain could not protect Australia -- and worse, would not if it cost much. America would thereafter come to be a more important military ally. In the 1960s Australia started incorporating Aborigines fully in the national conception of who made up the Australian nation; it was only in 1967 that a referendum passed to include Aborigines in the national census. It was Britain that gradually weaned Australia from being an overseas part of Britain. The last straw, according to David Malouf, was when Britain joined the Common Market - turning toward Europe and thus turning away from Australia.

As David Malouf said in his Quarterly Essay on Australia's British heritage, "Being tumbled out of the nest was the making of us."
Posted by Gruntled at 4:46 AM 3 comments:

Today we went to Melbourne's fine Immigration Museum, located in the former Customs House. We talked with Georgie Meyer, the director of public programs who led our tour and answered our questions, about who the museum served. Most of the local adults who visit are from British and other European descent. The more recent immigrants, from Asia, the Middle East, and Africa, are very unlikely to come on their own.

What I take from this is that the social category "immigrant" is a status between "newcomer" and "old stock descendant." Groups thought of a original settlers are founders, not immigrants (Samuel Huntington says as much, talking about the U.S.). On the other end are groups in which the original immigrant generation is still alive. They don't go to the Immigration Museum to hear their story, they go to the [ethnic] Cultural Center to live their story.

Immigrant is not just a temporal status, though. An immigrant group is assimilated into the "pre-Australian" path. They are part of a larger category, defined not by where they came from, but by what they are about to become. Recent migrants might go back home. Immigrants, on the other hand, can be seen, in retrospect, to be here to stay. Immigrants are migrants turning into Australians.

This insight applies to the United States, and other settler societies, as well.
Posted by Gruntled at 10:14 PM No comments:

We took a tour of Melbourne today. Our able tour guide, a proud Melburnian, emphasized that Melbourne, unlike Sydney and most of the other Australian cities, was not founded by convicts but free settlers. He even allowed that other colonies, later states, in Australia thought Melbourne and Victoria, the state of which it is the capital, were a bit snooty because they did not have the "convict stain."

Richard Hughes wrote his great book on the convict foundations of Australia, The Fatal Shore, because growing up in Australia the convict past was ignored. The convict stain still lived, though expressed more by silence and ignorance than by cover-up and shame.

Our guide appears to have been raised in the pre-1960s era when the convict past was simply not discussed. It was fascinating to see that the shadow of the convict stain lives on.
Posted by Gruntled at 12:25 AM 3 comments:

The Bushman and the Farmer

Ward explicitly compares the Australian frontier legend with the American version, as articulated by Frederick Jackson Turner. There are similar types in the two frontiers, the cowboy having much in common with the bushman. Still, Ward concludes that the American emphasis on the independent yeoman farmer led to American individualism. The Australian outback, though, was just drier and harsher than the American plains. Instead of family farms, Australian agriculture rested on sheep stations controlled by rich owners. The bushman is an employee. The distinctive virtue that bushman developed in those more difficult geographic and economic circumstances is that distinctive Australian virtue of "mateship." Ward sees this as the foundation of Australia's greater collectivism, when compared with American individualism.

Ward makes a rich argument, which I think holds up in its main points.
Posted by Gruntled at 2:52 AM 2 comments: