The Scariest Family Idea: Marriage is Just for the Rich

As the marriage rate reaches disastrous lows among some poor subgroups in America, a scary idea has been developing: marriage is just for the rich. In neighborhoods where babies are common but husbands are not, a wedding is something women hope for, the way they hope to win the lottery.

This kind of thinking misses the powerful effect of marriage as a cause of being middle class, not just as an effect of being born there. People who finish high school and stay married have a slim chance of ending up poor, not matter where they started out in the class structure.

The overall divorce has been going down, led by a decline in the divorce rate among college graduates. College graduates know the newest information about family life – including the knowledge that marriage is good for women and for men, that married people live longer, are happier, and end of richer. College graduates are doing less cohabiting for a similar reason. Things are looking up for marriage from the middle of the social structure upward.

Putting these two ideas together, I see this message: smart poor people get an education and a marriage. The people with the most education, no matter how poor they started out, are already getting the message. The next step is to preach this good news to the poor: you can be married, and it will go well with you and your children.
Posted by Gruntled at 7:20 PM 2 comments:

Isn’t There Something Wrong With the Triply Wed?

The New York Times has a long story by Mireya Navarro that has been causing a stir among marriage supporters. “A Double Standard for the Triply Wed” asks two important questions. The first is the question in the title: are women who have been married three times or more judged more harshly than men in a similar circumstance – the current Mrs. Giuliani, for example, compared to her husband, presidential candidate Rudy.

This is a fair question. I think women usually are judged more harshly for their sexual history than men are. I disagree with this double standard. If anything, I think that men should be judged more harshly for cutting and running as a way of life, because they still have more options afterwards than the women they leave behind. This question is not so hard, really. There are few public defenders of the sexual double standard now.

The second question raised by this article, though, is of a different order. Constance Ahrons, author of The Good Divorce and cited as a divorce expert in the article, says that the multiply-married face the judgment that “’Something must be wrong with you.”’ We haven’t gotten over that for second and third marriages.” It is not so surprising that Ahrons, who decided not to remarry after her second divorce but just cohabit with whatever partner she might have, would oppose judgment. Indeed, I think half the reason that the sexual double standard has few defenders today is not so much because the double standard is unjust, but because many people are afraid to voice a judgment at all.

Avoiding judgment is impossible and self-contradictory. Claiming that we ought to avoid judging is a judgment. Being against judgment is, I think, more of a tactic to avoid thinking a problem through than it is a compassionate response to the people with the problem.

I think people who have married, divorced, and remarried several times do have a problem. The thrice-wed make up only about 3 percent of the population, so it is not a huge problem. And that 3 percent includes remarried widows and widowers – not the same issue morally at all.

In any given case there may be a series of good reasons explaining multiple remarriages. As a group, though, I think it is reasonable to suspect that, yes, there is something wrong with the triply-wed. The main thing that I think is likely to be wrong is that they have the wrong idea of what marriage is. We should help them, and help everyone better understand what marriage is. Helping requires judgment.
Posted by Gruntled at 8:05 AM 3 comments:

Google bought YouTube, and with it bought a copyright suit for all the TV shows that its many users upload and download without paying the producers of the TV shows. Shows like Viacom's "The Daily Show" – which led Viacom to file the biggest copyright suit ever. According to Clive Thompson's interesting article in New York magazine, Viacom and Google will probably settle for a pile of money, after rattling intellectual sabers about copyright freedom.

The interesting part of the conflict for me is the core Google idea that all information should be available to anyone – they just sort it. Yet my first reaction tells me that I fall in the middle between corporate culture and knowledge class culture. It seems obvious to me that if Viacom pays a bundle to make TV shows, then millions of people see the show without paying Viacom or even watching its advertiser's ads, then Viacom will not have enough money to make new shows in the future. This is an argument I had with Napster-using students before the courts drove a stake through the old piratey Napster's heart.

In the end, these two corporations will settle it the good corporate way: with money. In the larger cultural struggle between the knowledge class and the corporate class, though, I think the rising knowledge class needs to develop a more sophisticated theory of knowledge production. The Google/Napster/teen pirate theory is all about consumption: the corporations have already made the knowledge, and already made their profit from it, so now it belongs to the people, man. An exclusive focus on consumption, without any thought to production, is a perennial failing of the soft-headed left. Now, though, the knowledge class is in a real position of power, and therefore of responsibility. The distributors of knowledge have to be concerned about how knowledge will be produced tomorrow. This concern is both high-minded and self-interested, driven by both the love of truth and their interest in having something to distribute tomorrow.

I don't have the answer yet, but it helps to have the right question: what should the knowledge class theory of knowledge production be?
Posted by Gruntled at 12:29 PM 10 comments: 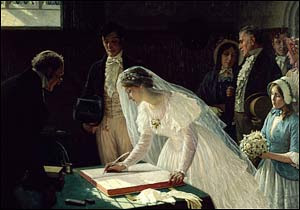 Still, I think it would be perfectly appropriate, even romantic, for married people to have wedding art in their homes. One of my favorites is shown above, of the bride in the Victorian registry office. Can anyone identify it? I can find the image, but not the painter. Ironically, this one was recently the subject of controversy. The Liverpool Registry Office decided it might be politically incorrect to have this on the wall when homosexual couples came by, so they took it down.
Posted by Gruntled at 8:17 AM 3 comments:

Wade Horn, My Favorite Member of the Bush Administration, Is Stepping Down

Wade Horn, Assistant Secretary at the Administration for Children and Families of the Department of Health and Human Services, announced today that he is stepping down. He was the president of the National Fatherhood Initiative before joining the government. Horn has been a moderate and sensible proponent of marriage and fatherhood for years. Too bad.
Posted by Gruntled at 5:32 PM 3 comments:

William Jeynes, an education professor at the University of California Long Beach, is about to release a study based on the NELS, the National Educational Longitudinal Survey. Specifically, Jeynes compared white students from all kinds of family structures with black and Latino kids who were highly religious and lived with their own married parents. When Jeynes compared these groups, controlling for social class, the white/non-white gap in math and reading virtually disappeared. The science gap remained significant, though it was much smaller.

According to the Christian Post, Jeynes will present his findings to the National Press Club on April 3rd. I expect to see more of this story after that.
Posted by Gruntled at 8:01 AM 3 comments: