A student reported this to me this week:

"I have a very close friend who after graduation is going into an AmeriCorpse job in Montana."
Posted by Gruntled at 8:44 AM 1 comment: 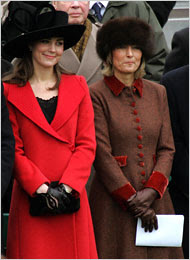 We can only hope that she has some starch, and can keep it intact.
Posted by Gruntled at 11:46 AM 3 comments:

Black Man in the Klan

Last night Centre College hosted a great convocation by Daryl Davis under the title above. Davis, a professional musician, got to know a number of leading klansmen in the course of writing a book about them. Some of these encounters were fights. But what he spoke of last night were some great triumphs. Davis interviewed a Grand Dragon (state leader) of one Klan group under the eye of an armed bodyguard. He listened respectfully, and the other guy treated Davis respectfully. Afterwards, Davis decided to keep in touch with the Grand Dragon, who becomes in the story a guy named Roger Kelly. The two men meet in one another's homes to eat and talk. Kelly and his friends go to hear Davis play. Davis goes to Klan rallies to hear Kelly, now an Imperial Wizard (national leader) preach.

After years of civil encounter, what Kelly described as the "cement" in which his racial views were embedded crumbled. He quit the Klan. He gave Davis his Imperial Wizard costume, complete with pointy hood and mask. Daryl Davis brought these items out on the stage at Centre College last night.

This was only one of Davis' powerful stories of civility, mutual respect, and redemption.

Daryl Davis showed the power of respectful civility across lines of conflict. That is good gruntling.
Posted by Gruntled at 8:27 AM 3 comments:

Sociologist John Bartkowski asked the parents and teachers of 16,000 kids how well behaved they were. They wanted to know which kids showed the best self-control, were most skilled in relating to other people, and had the best approach to learning. The verdict: if the whole family went to religious services regularly and talked about their faith, the kids were best behaved.

This makes sense to me. If the whole family shares a moral order together, and with a larger community, and regularly renews their commitment by what they do and what they talk about, the kids have a meaningful world to behave within. The researchers did not know why religious institutions had this effect more strongly than other organizations that involve whole families. I think it is because religious faith offers the widest vision of the meaningful order, but I would be interested in argument on this point.

In any case, though, sociology confirms what most religious people could show examples of. IF the whole family really practices their faith with the kids and without ambivalence, the kids will find it makes sense to relate well with other people, too.
Posted by Gruntled at 10:56 AM 5 comments:

What Does Work For Teen Abstinence?

A new study came out from Mathematica, commissioned by the Department of Health and Human Services, testing the effects of sexual abstinence education courses aimed at middle schoolers. As previous studies have shown, abstinence-only curricula don't have an effect. One new element in this study: unlike previous studies, taking a "true love waits" pledge or the like had no effect, either.

One section of the study profiled the kids who were abstinent. Of the many factors that the original curricula included, such as improving knowledge of which contraceptives worked best, and what the risks of sexually transmitted diseases were, none made any difference in whether kids would actually avoid sex as teens. Only two factors were significant predictors of teen abstinence:
1) If the middle schoolers supported abstinence themselves; and
2) If their friends did, too.

This study could not take the question back one step further: why do some middle schoolers believe in abstinence, and why do they find friends who agree? I think the heart of the answer to that question is that those kids are more likely to have parents who clearly support waiting for sex, make a credible example in their own lives, protect the kids from some temptations, and know who their kids' friends are.

There is no magic bullet to assure teen abstinence, but there is much to give us hope – most especially, the fact that most kids are smart.
Posted by Gruntled at 10:47 AM 9 comments:

A week after the Virginia Tech shootings, I want to commend columnist Clarence Page for the most sensible response I have read. The conclusion of his April 18 column was

"What our schools need is more people who can serve as antibodies, watching out for troubled students and offering them help."

Social institutions are like organisms. This is the fundamental metaphor of the great sociologist Emile Durkheim's vision of society. In the case of schools, teachers have to be on the lookout for troubled students. The English teachers were on the job at Virginia Tech. The ball was dropped at the next stage, and the law prevented Cho's parents from being notified – something I wrote about last week.

Page also notes that students do tell teachers about scary students. They are even more likely, though, to go to trustworthy outsiders who are in the same "cultural zip code" as the students. Page promoted the idea of adult volunteers in the schools to be the antibodies to violence, to be the response system to distress.

Each of us sometimes runs across people who are sending out warning signals. It is our duty to them to notify the authorities, and an even greater duty to the social whole.
Posted by Gruntled at 8:58 PM 1 comment:

A Loyalist Thought About "Missional Polity"

The Presbyterian Church (USA) has an important task force working on a new "form of government" document. They are guided by the idea that the church has a “missional polity.” The idea is that the church does not have a mission, but that its very essence is mission. The church is part of God's mission to engage the world.

I can almost grasp what it means to say that being is doing -- that the church is what it does. This is akin to my colleagues who talk about "doing theology," a concept (a metaphor, really) that I can almost grasp. I could be convinced to embrace the idea, I think, with more understanding.

But the sociological insight about the church that most of my work has been based on is that the loyalists at the center of the church are loyal to the institution as it actually is. They like the specific congregation they go to, the familiar ways that their presbytery works, and (most of the time) the lumbering steps and counter-steps of the General Assembly. The first mission that the loyalist is committed to is making sure that the actual church is still there tomorrow to do whatever other work it does. For loyalists, the church is an institution with a mission, even if in some larger sense it "is" a mission.
Posted by Gruntled at 8:47 AM 10 comments: