Which picture has more people in it? 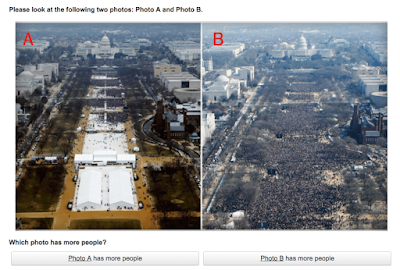 In a survey conducted on the Sunday and Monday after Pres. Trump's inauguration, 15% of Trump voters said the one on the left. Only 2% of Clinton voters, and only 3% of nonvoters, said the same.

I do not believe that Trump voters can't count, nor that they have bad eyesight.

Rather, they are deliberately giving a false answer – what psychologists euphemistically call expressive responding – to show their loyalty.

Sadly, it appears that they have greater loyalty to their team than to the truth.


I used to think that there were two things we could count on the business-oriented party to do whenever they were in power. First, reduce taxes on the rich. Second, reduce regulations on corporations.

I have come to realize that there has always been a third objective: privatize government functions so for-profit corporations could rake in tax money.

Therefore, what privatization amounts to is giving businesses the governments cost of achieving a public end, plus a guaranteed profit.

Oh, and the privatizing businesses are always big donors to the business party.
Posted by Gruntled at 7:09 PM 2 comments: