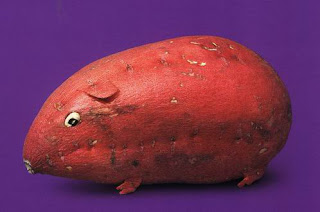 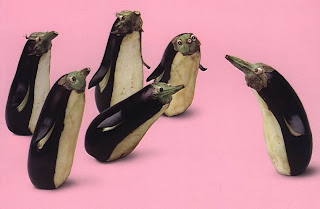 My mother sent me an email of "What chefs do when they are bored." They are really great. Here are just a couple.
Posted by Gruntled at 7:25 AM No comments:

Last night David Quammen, author of The Reluctant Mr. Darwin gave a lecture at Centre. His book was read by all the first-year students. This is Darwin year for two reasons - the bicentennial of Darwin's birth, and the 150th anniversary of the publication of On the Origin of Species.

I had known that Darwin had the basic idea of evolution through natural selection long before he published it. I had not really processed, though, just when he had his big idea. Darwin's notebooks show that it was 1838 that he had his big intellectual breakthrough. This is right in the middle of founding era of sociology.

1827 August Comte coins the term "sociology" and articulates the Law of the Three Stages of scientific evolution.

1848 Marx and Engels publish "The Communist Manifesto" articulating the theory of social evolution through struggle over the means of production.

It was only in 1859 that Darwin finally published the book that made "evolution" a term we think of primarily in biological terms. We are still living with the legacy, though, of the several kinds of evolutionary ideas, biological and social, in sociology. In general, the social sciences turned away from evolutionary theories just as biology was turning toward them. Now that biology is being re-incorporated into social science (especially in family studies), we may see a new turn in sociological thinking on evolution. Or a new reaction.
Posted by Gruntled at 11:52 AM No comments:

"Fireproof" is a Decent Marriage Movie

"Fireproof" is about a couple on the brink of divorce working back to real love and respect for one another. It is explicitly evangelical and a little clunky. But its heart is in the right place. It gets Southern evangelical culture right (it is set in Albany, GA). I particularly liked the parallel complaints that husband and wife made to their friends about how the spouse was the real problem because he/she did not give the complainant enough respect.

"Fireproof" has been the talk of the pro-marriage circuit this year because it shows in some detail what steps and what changes a couple who want to save their marriage can take to get on the right track. And the happy ending teared me up, even if it was a little cheesy.
Posted by Gruntled at 11:18 AM 1 comment:

On "Cellphones, Texts, and Lovers"

David Brooks has an interesting column on the way some people use cellphones and texting to create a fluid market in sexual hookups. The data come from New York magazine's sex diaries, submitted by readers.

Brooks' main point is that in courtship in days gone by social institutions provided a set of "guardrails" to help people sensibly get from short-term attraction to long-term commitment. He concludes that it is a loss that young people today do not have such guardrails.

I mostly agree with Brooks. I disagree on two points of emphasis.

First, most young people who court in school, with friends around and families in consulting distance, do in fact have help and guardrails. Some (not most) engage in hookups, especially in the first flush of freedom from home. But most leave that behind when looking for a serious mate.

Rev. Charles Rush has a wonderful story of the brief visit of his son and daughter-in-law, both soldiers, home from Afghanistan just long enough to get married.

Young Rush was the first of his siblings and friends, all elite college students and graduates, to get married. Rev. Rush made this striking observation:

And in the college world his friends inhabit, especially the fraternity world, marriage is not exactly at the top of everyone’s list.

In the world of the enlisted men and women, however, a premium is placed on loyalty and steadfast support, and this translates into a high rate of marriage, even among young people who are only in their late teens and early 20s.

Our birthrate is so low, especially among the educated classes, in part because we are delaying marriage longer and longer. One unexpected effect of this war may be to reduce the marriage age in at least one sector of the younger generation.
Posted by Gruntled at 4:27 PM 4 comments: 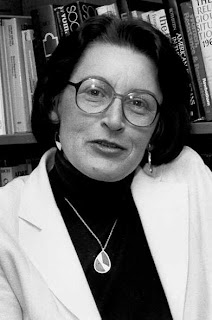 Alice Rossi, a leading family sociologist, died this week at 87. She was criticized from the right in the '60s for proposing sexual equality. She was one of the founders of the National Organization for Women. In later years she was criticized from the left for allowing that there are some important biological differences between men and women. While not a centrist, she came closer toward the middle on the sex and gender question than most feminist sociologists of her generation.

This picture is from her term as president of the American Sociological Association in 1983.
Posted by Gruntled at 12:02 PM 1 comment:

Our sermon this morning was on approaching life with generosity because God is in charge, versus approaching life with fear because there's not enough. The immediate context of this sermon is stewardship season, when church members make their pledges for the coming year. Most church people are probably hearing similar sermons now.

I heard this sermon in the larger context of the vote yesterday in the House of Representatives that the richest nation in the history of the world can afford to make sure every citizen has basic health care.