No new bumper stickers on the Gruntlwagon this week. To top the snow of two weeks ago and the rain of last week, we had an ice storm.
Posted by Gruntled at 10:36 AM No comments:

MIT is developing proverbial wallets that physically change as your electronic accounts grow and shrink. They aim at "unabstracting virtual assets" - just as the amount of bills and coins in your pocket unabstracts how much physical money you have.

I particularly like the "Mother Bear" model. It has a hinge inside, and an electronic connection to your bank. If making your monthly budget goal looks tight, the wallet makes itself harder to open. That is a good nudge.
Posted by Gruntled at 9:50 PM 1 comment:

Claiming the Sad Virtues of Divorce

Rachel Zucker's "Let's Get a Little Divorced" column is shocking, as it is meant to be.

Her underlying sentiment, that married couples should keep up their independent skills even as they work together as a team, is a sound and honorable one. Framing independence as a good fruit of divorce is not entirely wrong. Still, it is a sad commentary that we have to work backwards through divorce to think about how to be married well.

It reminds me of the story that goes around every year before Black Marriage Day. A little boy in a community where marriage is rare and decent fathers are scarce vows "when I grow up I am going to be a good dad; I'll pay my child support." This is so sad it makes the grandmothers weep.
Posted by Gruntled at 3:20 PM No comments:

The Sufi community in the little town of Sidney Center, NY, buried one of their own on the community's farm. The Board of Supervisors investigated to make sure the burial was legal. It was. Nonetheless, one Supervisor, an anti-government Republican named Robert McCarthy, still objected, calling for the dead to be disinterred because "you can't just bury Grandma in the backyard under the picnic table."

That is the ugly part. This is the good part.

The town rallied 'round the Sufis. The next Board of Supervisors meetings was packed - a rare occurrence - calling shame on McCarthy. A local lawyer, who is Jewish, offered to represent the Sufis pro bono. A Republican committee woman resigned in disgust, and instead went to the Sufi community center to meet her turbaned neighbors for the first time. Hans Hass, spokesman for the Sufis, became a national figure for a moment as the story spread. But Hass was already a well-respected local figure, integrated into the town. Hass is a building contractor, volunteer fireman, and captain of the ambulance squad (!).

As if on cue to illustrate the points I had been writing about from American Grace, Sidney Center shows how religious difference binds us together, even in the face of the uncivil minority.
Posted by Gruntled at 9:48 AM 21 comments: 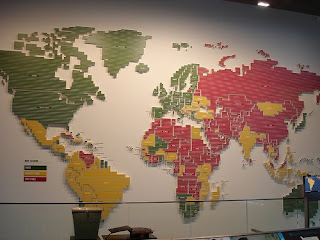 The Newseum in Washington, D.C. has a fascinating map of world press freedom. Green countries have a free press, yellow are partly free, and red countries control their press. The calculations are made by Freedom House, and the tiles that make up the map are changed annually.

The press freedom map shows how unusual our press freedoms are. The map is also an effective tool for shaming the yellow countries into loosening up. For example, Israel moved back from yellow to green this year when it lifted government restrictions on reporting from Gaza.
Posted by Gruntled at 8:42 AM 10 comments:

"What's That Name?" as Class Privilege

This is a fine illustration of class privilege.

One More Thought About American Grace

Robert Putnam is famous for Bowling Alone, his study of declining social capital in America.

American Grace is his major follow-up study, in which he was looking for what does hold America together. He concluded that religion actually does hold us together (which is does not do in some countries). This is an encouraging conclusion, more encouraging that Bowling Alone.

In fact, Putnam and Campbell said that “praying together seems to be better than either bowling together or praying alone.”
Posted by Gruntled at 9:11 PM No comments: