Rodan the Stork is a Good Dad 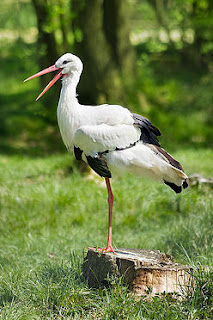 Rodan, a stork, flies back 8,000 miles from South Africa to Croatia each year to return to his wounded mate. They raise a bunch of little storks. He teaches them to fly. Then back he goes to South Africa, to return again the next spring. He has been doing this for five years, and will likely keep returning.
Posted by Gruntled at 4:26 PM 2 comments:

Republicans vs. Democrats on Obama

A new Harris poll has some fascinating numbers on what Republicans and Democrats believe about President Obama. Since I reported earlier on some of the interesting beliefs of Republicans in a Republican-only poll, I am glad to have some comparative numbers. All the questions began "here are some things people have said about President Obama. Please indicate for each whether you believe it is true or false." I will give Republican vs. Democratic "true" answer percentages.

Then let's look at his political intentions:

Finally, some global assessments of his being:

The last two questions are particularly interesting, as I believe they are, within the American civil religion, two versions of the same thing.

For the record, I believe all of these claims are false.
Posted by Gruntled at 8:27 AM 24 comments:

Divorce rates go down in recessions because divorces cost money. They typically go back up again afterwards. Still, we could cut the divorce rate in half if couples would just stick out difficult times. Some couples on the road to divorce before the recession will have time to reconsider while they wait out economic hard times. One of the things they can consider is that divorce is likely to make their economic difficulties permanent for themselves and their children.
Posted by Gruntled at 9:16 AM No comments:

The author of one of the provocative blockbusters of '70s feminism thinks the feminist movement has been a great success. I mostly agree. I am puzzled by what she cites as evidence, though: the high divorce rate. She reads divorce as due to women heroically accepting hardship rather than acquiescing in servility. Some divorces, no doubt, fulfill this claim - much more so then than now. Still, I think she is way out of date on what drives most women to seek divorce today.

If divorce and feminism are importantly connected today, I think it is more that our high divorce rate shows the acquiescence of feminism in a false view of women and men as most fulfilled when they are most autonomous.
Posted by Gruntled at 5:16 PM 3 comments:

Universal health insurance passed Congress last night. I believe this will be the signature achievement of the Obama administration. After all the compromises were made, both with Republicans and with fellow Democrats, the final bill was, as the president said, "straight down the center of American political thought." I think that within a few years universal health care will be as much a part of the grain of American society as Social Security and Medicare. We will look back on this debate and wonder why some people thought getting health insurance for all was such a scary idea.

I think many of the other things that President Obama wants to do have been waiting on passage of this law. Now he can go ahead with other elements of his agenda. He will be able end the war in Iraq, fight the war against our 9/11 attackers, close the Guatanamo Bay prison, end "don't ask, don't tell," draw down the war deficit, stimulate jobs in energy-efficient industries, make us less beholden to oil barons, work together with the great powers of Europe and Asia to defuse new nuclear threats. Oh, and while he is at it, improve race relations in America. I believe the president will have a big year.

President Obama's approval rating today stands at 26% strongly approve, 42% strongly disapprove. I believe that a year from now, those numbers will be reversed.
Posted by Gruntled at 7:39 AM 63 comments: