Most Republicans Think Human Beings Were Created Less Than 10,000 Years Ago 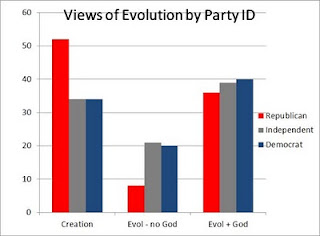 Jay Livingstone, at Sociological Images, has made this fine (though sad) graph based on Gallup data. The three options Gallup offered are:

Humans evolved, God had no part in the process; or

What "Happy Wife, Happy Life" Means - for the Wife

Gretchen Rubin, in The Happiness Project, has an interesting take on the proverb "If mama ain't happy, ain't nobody happy" - or its pithier version, "Happy wife, happy life."

Rubin is herself a wife and mother.  She believes that this proverb is true (with which I agree).  She also argues that because it is true, she has a responsibility to her family to try to be happy.  As a result of her happiness project, she made a concerted effort to be less critical when things didn't go as she hoped with her husband and children, and to enjoy more what her family did with and for her.

Rubin says her effort to be pleased paid off for her family as well as for herself.
Posted by Gruntled at 7:12 PM 2 comments:

Want Secure Kids? Hug Them When They are Small

Fascinating new research shows that holding and caring for children when they are little turns on genes that reduce the child's stress responses, and helps them grow up balanced and resilient.

We are wonderfully made that an activity that feels so good to grownups is also of such lasting benefit to children.
Posted by Gruntled at 7:27 AM 1 comment:

Hakim cites studies showing that beauty confers an advantage in pay of 10 - 20% across industries.  This is comparable to the pay advantage that comes from being taller.

The book, as a whole, is disappointingly thin in its empirical support.  Nonetheless, I think the basic idea is true and worth developing.
Posted by Gruntled at 10:57 AM 4 comments:

When Bill Clinton was first elected president, one of the first items he tried to spend his political capital on was repealing the ban on gays and lesbians serving in the military. However, the opposition from conservatives was so strong that he had to compromise. The result was Don't Ask, Don't Tell.

Don't Ask, Don't Tell was a centrist policy at the time. It ended the earlier policy of actively ferreting out homosexuals in the military as a security threat. This was a liberal gain. But it stopped short of fully accepting homosexuality. This was a conservative gain.

In the years that followed, the sentiments of the country changed. Young people, in particular, accept gays and lesbians as normal Americans. This is true even of young people who are otherwise quite conservative. Just as important, a generation of military leaders came to power who also accepted gays and lesbians as normal members of the military. Their testimony, it seems, was the crucial step in convincing some Congressional Republicans to vote with the Democrats to repeal the law underlying Don't Ask, Don't Tell.

This story is the right way to make a controversial social change: take centrist steps until the change is no longer controversial to most people. Some people think this change should have been made long ago, that Don't Ask, Don't Tell was a sellout. Others think the change should not have been made at all, that homosexuality should not be normalized. But this day, when the Don't Ask, Don't Tell policy officially ended in the U.S. military, policy caught up with majority sentiment. Which is a good day for centrist social change.
Posted by Gruntled at 6:39 PM 4 comments:

Gigi Levangie Grazer is an expert on divorce, the hard way. The twice-divorced author of The Starter Wife and the screenplay of Stepmom has a fine piece of hard-won wisdom in the Huffington Post. I can't write with this kind of authority.

My favorite nugget is this:

When you do go out with someone (after the kids go to bed), you size them up not only against your standards, but the standards of your children. You're not the only one going out on that date -- your seven-year-old is right there with you, with his toothy grin. Your fourteen-year-old is scowling in the background. Your stoic ten-year-old has tears welling up in his eyes.

Frankly, other than superficial dating far away from your kids' eyes and ears, E.S.P. might be the only thing that makes sense for the single parent.

For my conservative friends who have been telling me that the poorer half of Americans pay no taxes: