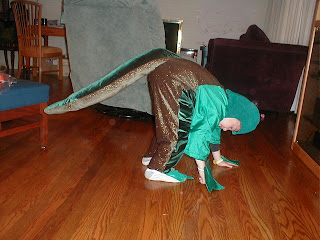 One Thing That Doesn't:

The other day, Da Nephew [D.] asked his mother whether or not there were lizards where Jesus was born. His mom shrugged and said, "I think so." D. said, in that case, he would like to be a lizard for the church Pageant instead of a sheep. Fast forward a few weeks, and D. is wearing a beautiful lizard costume, complete with tail, thanks to Grandma. Pictures attached. Fast forward a few more months, and we'll send you pictures of Godzilla menacing the manger.
Posted by Gruntled at 9:08 AM No comments:

Ben Wattenberg describes himself as a "sometime libertarian." He doesn't want government telling people what to do. On the other hand, he has quite a few things that he thinks people should want to do. People like that often have a hard time deciding what to say about having children. Most of them do have kids, and most of them think that kids are great. They are reluctant, though, to even promote having kids as good for other people, since nothing constrains your liberty like children.

In Fewer, Wattenberg notes that these days about 16% of women have no children, but 3/4ths of them wish they had done otherwise. Torn between two inclinations, he nonetheless comes to this conclusion: “But my own belief is that having and raising children is the essence of the human experience.”
Posted by Gruntled at 11:38 AM 1 comment:

Reason Not to Drink #482: Alcoholics Don't Get Jokes

This is off my usual topic, but was so interesting that I wanted to share it.

German researchers studying the many ways in which alcoholism screws you up found that it impairs your ability to understand a joke. This would be a tragedy in the Gruntled household.

The sample joke that they released was this one:

The subjects were given a choice of four punchlines:
a) Anna said: "Hi mum, we didn't expect you to be awake so early."
b) Anna picked up an egg and smashed it on her brother's head.
c) Her brother said: "We have a new teacher at our school."
d) Anna said: "It's a surprise for Mother's Day. We cooked our own breakfast."

The correct punchline is the last one. (Didn't get that? Put that bottle down!) Only 68% of alcoholics got that, compared to 92% of other people.

Actually, I could see how each of them could be funny in the right context.

With teenagers who sleep 'til noon, and don't realize that they normally find breakfast ready because mom gets up and makes it: Anna said: "Hi mum, we didn't expect you to be awake so early."

With the "Three Stooges: The Next Generation": Anna picked up an egg and smashed it on her brother's head.

OR with a little more dialogue: Anna picked up an egg and smashed it on her brother's head. "We were just discussing the proper method for scrambling eggs."

With ADD kids, or with the normal attention span of little kids: Her brother said: "We have a new teacher at our school."

Keynesianism is Centrist - Isn't It?

Last night Centre College students had a good debate. A College Democrat represented Sen. Obama's position, and a College Republican represented Sen. McCain's position. Another student, from our Bonner Scholars program, moderated, presenting questions submitted by the student body. Everyone did a fine job, and the whole debate was more informative than the candidate debates.

I was surprised by one exchange that went beyond anything I have heard from the actual presidential campaigns. The Democrat argued that Republicans still believed, as Pres. Hoover did, that the market should be left alone to settle recessions without government interference. In response, the Republican argued that when FDR raised taxes and created government jobs in order to give consumers money to stimulate the economy, he was the one who wrecked the economy.

I have heard informed opinion that the New Deal's Keynesian policies did not end the Depression by themselves -- World War II so stimulated production that people were put back to work (though much of that was also through government spending on war goods). Still, I thought it was taken for granted now that the Republican laissez-faire response to the Depression made the problem much worse, whereas Keynesian stimulus approaches saved the economy - indeed, saved capitalism.

Now I am not holding the Republican Party or Sen. McCain responsible for the views of one 18 year old College Republican. I expect, though, that he got this idea from a discourse circulating in Republican circles still -- or perhaps again. So, dear readers, are "We are all Keynesians now?"
Posted by Gruntled at 7:32 AM 10 comments:

I'd Be a Hanging Judge in Cohabitor's Court

A story in the Tennessean by Janell Ross goes through the tangles cohabitors get themselves into when they split up. She tells the sad tale of a doctor who sued his former girlfriend for $46,000 to get back what he put into the house they bought together. The judge said that since they were not married, and had not made any legal agreements about who got what in the event of a breakup, Dr. Out-of-Luck had made a gift of the house to his girlfriend in the course of the relationship. The doctor's haul from the legal suit: $0.

Serves him right, I say.

If people want to have a marriage-like relationship but won't or can't marry, they should make a legal contract, or suck it up. If they think marriage is "just a piece of paper," then so is a mortgage -- the kind you have to pay to the bank, no matter what happens to your feelings.

If you want the legal, financial, and social benefits of marriage, then get married.
Posted by Gruntled at 8:33 AM 1 comment:

Will Wilkinson of the Cato Institute has an interesting consideration of the liberal principle (cited to Rawls here, but found more generally in liberal thought) that a just society would have equally talented individuals having an equal chance at each position in the social structure. Wilkinson is for general equal opportunity laws and norms. He argues, though, that there is no way that equally talented individuals are likely to be in the same social networks, and networks strongly shape what opportunities come our way. Instead, he argues for a lightly regulated world with many different kinds of opportunities for talent to find a good place for itself:

Elite networks can achieve only limited succe[ss] in opportunity hoarding if new networks, new opportunities, and new hierarchies of prestige and status keep springing up.

Individual chances can't ever really be equal, but individuals can be in networks that are roughly equal. This seems to me a good sociological insight.
Posted by Gruntled at 2:13 PM 3 comments:

My essay Rebuilding the Presbyterian Establishment is making its way through the church's cadres. I saw a thoughtful response the other day from a seminary professor who asked why I did not look to Presbyterian colleges for help in rebuilding the Establishment leadership that the denomination once had. This is an excellent question; I should, indeed, have addressed it in the essay at greater length. I have, though, addressed this question in Called To Teach: The Vocation of the Presbyterian Educator, a volume I edited with Duncan Ferguson.

Presbyterians have devoted more efforts to creating educational institutions than any other Protestants in this country. Our teaching vocation has never been aimed simply at educating Presbyterians, but has always been part of the Reformed vocation to be stewards of society. Presbyterian colleges were not created to develop a Presbyterian Establishment, but rather to educate a mixed leadership for all of society.

There is an interesting plurality of PC(USA)-related colleges who have been trying to develop a stronger Presbyterian dimension within a larger academic identity. These schools are likely to have a disproportionate share in nurturing Presbyterian leaders in the future. If we are truly to rebuild the Presbyterian Establishment, we should look to this ember maintained by the dimensionally Presbyterian colleges.
Posted by Gruntled at 7:38 AM 2 comments: