Jonathan Rauch has a fine article in the Atlantic on the U-shaped curve of happiness.

Not for everyone, and not in every society, but strong enough to be a helpful pattern, we see life satisfaction bottoming out in the late 40s for many people.  And then it gets better.

There is much in here, including a whole section on brain development.

I found this to be the most helpful idea:

“This finding,” [Princeton researcher Hannes] Schwandt writes, “supports the hypothesis that the age U-shape in life satisfaction is driven by unmet aspirations that are painfully felt during midlife but beneficially abandoned and felt with less regret during old age.”

The curve below was compiled by economist Carol Graham and colleagues, looking at averages in many different countries.  The X-axis measures life satisfaction on a ten-point scale; the Y measures age. 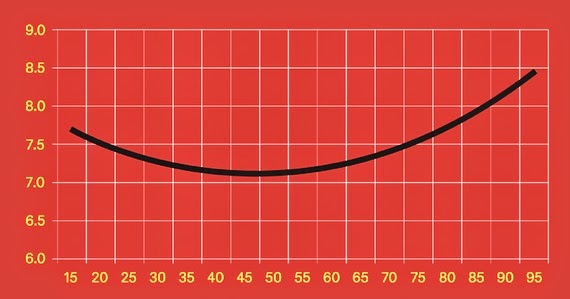 Posted by Gruntled at 8:04 PM No comments:

The Politics of Male First Names

Verdant Labs has a fascinating blog post on political trends in first names.

One big finding: "Of male names that are at least fairly common, the most Democratic are Jonah and Malik, and the most Republican are Delbert and Duane."

I think I know what is going on here.

The Democratic end is tipped by distinctively black or Jewish names. In addition to Jonah and Malik, we find Ethan, Willie, Saul, Emmanuel, Isaiah, Tyrone, Omar, Irving, and Israel.

On the Republican side, we find country white names. In addition to Delbert and Duane, there are Rex, Dallas, Brent, Troy, Lyle, Darrell, Billy, Ricky, and Randy.

The Distribution of Generosity

Christian Smith, a sociologist at Notre Dame, has been reporting the results of a large Science of Generosity project.  Sociology is particularly useful for giving us a sense of proportion of how phenomena are distributed in a large population.

Americans as a whole are generous people.  We give away huge amounts of money for good causes.

However, nearly half of Americans - 45% - give nothing.

Poorer people give away a higher proportion of their income than richer people do.

Looked at another way, 57% of all the charitable dollars in America are contributed by the 5% of Americans who are most generous.

And I should note that the main point of The Paradox of Generosity, by Christian Smith and Hilary Davidson, is that people who give more away lead happier and healthier lives.
Posted by Gruntled at 12:54 PM 3 comments: