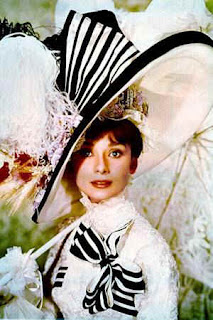 Today is the high holy day of the civil religion of Kentucky, Derby Day. One of the many charming and goofy features of the day are over-the-top women's hats. This year Chrysler had a competition for Derby hats suitable to wear in a convertible -- such as the Chrysler Sebring. These are the three finalists. The three designers will go to the Derby, where the winner will get a Sebring. I like the middle one, myself, but the whole thing is so hugely silly that any of them on a real woman would be amusing. It does look aerodynamically impractical for a convertible going more than ten miles an hour, though.

Still, these relatively practical models are not a patch on the great icon of hilarious headgear for race day, Eliza Doolittle's rig at the Ascot Opening Day in "My Fair Lady."

For my part I enjoy the crowd shots as much as the race itself. Enjoy.
Posted by Gruntled at 8:45 AM 1 comment:

Up Next: Legal Incest

There is a serious debate, in this country and in Europe, about whether incest should remain illegal as it has from time immemorial. When the Supreme Court declared all state laws against sodomy an unconstitutional intrusion on a citizen's right to have consensual sex in the Lawrence case, alarmists claimed that bigamy, polygamy, incest, and bestiality would follow. The alarmists were right.

I have written about the coming polygamy crisis. Incest is next.

Of course, nothing is inevitable in social life. We could have a new social movement to restore a public standard of sexual morality. But the movement to make sex, even marriage, a matter of private choice is well advanced. The Supreme Court has pretty nearly dropped the last legal defense. It would be possible to amend the constitution to prohibit incest, but it would be horrible. Liberals would feel obliged to go way out on a libertarian limb, from which it would be difficult to come back. My reading of the present political moment is that the movement toward social conservatism has run out of steam for this generation, and is not likely to be renewed soon.

One of my favorite college professors caused a wonderful scene during a polite dinner with some visiting evaluators. He grew increasingly frustrated as he tried to get them to draw any practical judgments from their philosophy. Finally he rose, and in a carrying voice, demanded to know if they could offer some reason why he shouldn't have sex with sheep - though he put it a bit more graphically than that. Not, mind you, that he wished to do any such thing; rather, he wanted them to explain if their philosophy had any conception of what was good, of how people should live.

We are not quite to the "sex with sheep" stage in the debate over the complete privatization of sex, but we are only a step away.
Posted by Gruntled at 6:35 PM 35 comments:

About a third of married couples take part in premarital education or counseling. Married couples who get premarital education reduce their divorce risk by about a third, among many other benefits. Communities with Community Marriage Policies, in which the town's clergy agree to require all the couples they marry to get premarital counseling, have reduced their divorce rate by an average of 2%, or about 30,000 divorces prevented so far. Most religious marriage counseling is free, and there are free or inexpensive options in most communities. Better marriages and fewer divorces are in the public interest, so most public-minded groups and agencies are very supportive of premarital education.

States can encourage couples to get premarital education by reducing the wedding license fees. The five states that have such policies so far – Florida, Maryland, Minnesota, Oklahoma, and Tennessee – give a discount of $20 to $50. This discount is as much a symbol of the state's commitment as it is a serious incentive to get premarital counseling, but it does have an effect.

Alan Hawkins, a family studies professor at Brigham Young, has helpfully reviewed the benefits and costs of state policies encouraging premarital education. He concludes that such policies save money, are politically feasible, and, most importantly, that premarital education improves marriages and reduces the divorce rate.

In Kentucky marriage license fees run about $35. To offer a discount for premarital counseling that would make a difference, we would probably need to raise the initial fee. If the license fee were $50 and the discount were $25 – that is, 50% off for getting an education that will help your marriage – this program could make a difference at almost no new direct cost to the state.

Encouraging premarital education and counseling through a voluntary program and a modest discount from the state is a feasible, helpful, centrist approach to improving marriages – and thus improving public life.
Posted by Gruntled at 7:48 AM 16 comments:

British researchers are working on a pill that would increase women's sex drive and help them lose weight. I predict that a giant fortune could be made.

So far they are only using it on monkeys, which has led to rump-shaking.

Scary.
Posted by Gruntled at 6:34 PM No comments:

Sometimes economists can see the trees of marginal individual advantage, but miss the forest of the human costs that seeking individual advantage imposes on others. A case is point is a new study by Penn economists Justin Wolfers and Betsey Stevenson reported in the New York Times. Wolfers and Stevenson report approvingly that weakening marriage means that individuals don't lose so much if their "investment" doesn't bring all the rewards they wanted. They report that no-fault divorce has produced less committed marriages. They also calculate that no-fault also makes it 6 percent less likely that a couple will have a child. Overall, marriage rates are down.

Wolfers and Stevenson, themselves an unmarried and (I believe) childless couple, do not see these developments as weakening society, but as strengthening individuals in getting what they want.
Posted by Gruntled at 1:33 PM 4 comments:

The Upper-Middle Class Have More Options Than Harvard

There is a fine piece in the New York Times about all the amazing smart kids desperate for Harvard who won't get in. The author, a Harvard alumnus and interviewer, does not lament that his kids are not determined to get into Harvard as he, a blue-collar kid, was at their age. For him, an elite college was the one way up. For his kids, who start out in the upper-middle class, they have many more options than he did -- because they know that there a many paths to success.
Posted by Gruntled at 11:57 PM 2 comments:

You Want the Book of Order to Be Your Essential Tenets? Be Careful What You Wish For.

Several presbyteries are considering overtures based on the idea that the standards in the Presbyterian Church (USA) Book of Order are "essential tenets of the Reformed faith," and therefore are binding on all candidates for ordination in the church. Such a declaration would help solve the problem of what, exactly, church officers are bound to when they pledge to be bound to the essential Reformed tenets. However, this solution would create an even bigger problem: it would also drag in the entire Book of Confessions as necessary standards for all church officers.

At the heart of this debate is the "fidelity and chastity" amendment to the Book of Order, G -6.0106b. It says:

Those who are called to this office in the church are to lead a life in obedience to Scripture and in conformity to the historic confessional standards of the church. Among these standards is the requirement to live either in fidelity within the covenant of marriage of a man and a woman (W-4.9001), or chastity in singleness. Persons refusing to repent of any self-acknowledged practice which the Confessions call sin shall not be ordained and/or installed as deacons, elders, or ministers of the Word and Sacrament.

I believe that what most proponents of a rule that "the Book of Order standards are essential tenets" want is contained in the first, "fidelity and chastity" sentence. However, what they have not fully reckoned with is that such a rule would also make the second sentence equally binding and universal.

Now, I have long argued that the Book of Confessions was a mistake. Adopting it meant that we have no confession, because we take none of them as a constitutional rule of the church. That is why we only fight over the Book of Order – it is the only really constitutional part of the constitution. The overture under discussion is part of that same shift to treating the BOO as the only really binding part of the constitution. The proposers of the overture, though, have not looked carefully enough at what is in the Book of Order. Declaring the BOO standards "essential tenets" will open more than a can of worms – more like a barrel.
Posted by Gruntled at 9:00 AM 6 comments: