Another dispatch from the Schreyer Seminar on Marriage, Family, and Social Sciences

Jeffrey Hill (BYU) reported on what happens when work demands so many hours that it interferes too much with most worker's family lives. In a study of a large white-collar corporation, he found that if workers have no flexibility about when and where they work - if they must be in the office during certain hours - then the break point is about 52 hours of work per week. Beyond that they are either so unhappy that their work suffers, or they leave.

If, however, workers have greater flexibility about when and where they work, they can and do work more - until they come to a new break point of about 60 hours per week.

A great savings from telecommuting came from eliminating physical commuting, which is a source of unhappiness for most people who have long drives to work. Hill found that workers who eliminated their commute through telecommuting tended to give half of the time saved to more work.
Posted by Gruntled at 6:01 AM No comments:

This post, and the next few, come from the excellent Shreyer Seminar on Marriage, Family, and the Social Sciences.

Some economists think that, since people live longer, they should work longer: work brings money and that is what matters most. In most countries the retirement age was set long ago, at what was then the average life expectancy. Today, most people who are working at middle age will be healthy long past that threshold. They could work and make more money. This would bring a personal benefit to them, and would help fend off the financial crisis of the retirement systems of all developed countries as the Baby Boom starts to exit the workforce.

This makes sense to me. In societies with secure pension systems (which includes just about all developed societies), most people do not need to keep working in old age just to survive. So what do they work for? Primarily, for their families. And when most people get to the point where their children are grown and launched, the main motivation to keep working full time grows up and moves out, too.

The chance for old people to make more money will not solve the pension problem, because money-making is not the main thing that motivates most people. Family is.
Posted by Gruntled at 7:23 AM 2 comments: 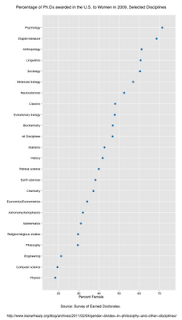 Women earn nearly half of all Ph.D.s in the United States. They vary from 3/4ths of Psychology and English Literature doctorates, to about 1/4th of Physics and Computer Science doctorates.

The overall proportion of Ph.D.s earned by women is what I would expect. More women come out as top students in college, which should lead to women getting more than half of all doctorates. But the normal timing and duration of a doctoral program conflicts directly with having children, which affects women more than men. This combination of push and pull factors leads me to expect that slightly under half of all Ph.D.s would be earned by women.

This chart seems to me certify a huge success story.
Posted by Gruntled at 4:12 PM No comments:

Philip Longman has a fine piece in Foreign Policy about the graying of the world population. The drastic decline in the number of babies, and the growing proportion of the population that is old, is a story I have written about before.

It is also well known that Americans, and the world population in general, is growing dangerously fat.

Longman offers a new detail that I had not considered before.

The unprecedented rates of obesity means that middle-aged people are more disabled now than they were in the past. This, in turn, means that they will be even more disabled when they are old. Which will come very soon.
Posted by Gruntled at 8:25 AM No comments:

Even if it is blatantly commercial in origin, Father's Day has taken root as a genuinely popular family holiday. It is suitably low key. And it does encourage fathers to take their duties seriously. Everyone notices.
Posted by Gruntled at 3:08 PM 1 comment: