Worth A Thousand Words 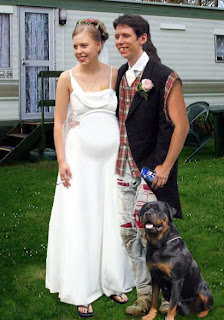 A friend sent me this gem. I am not sure who these folks are, but I wish them a prosperous marriage.

The Gruntled Center will close for Christmas now. See you in the New Year!
Posted by Gruntled at 7:38 AM 10 comments:

Educational Homogamy Matters More Than Ever

Hans-Peter Blossfeld and the other authors of Who Marries Whom? draw some general conclusions about educational homogamy today:

Schooling matters more now to your subsequent occupation and income than ever before.

Not having a degree closes you out of the next highest social world (though more so in Europe than in the U.S.).

Age-graded schooling, for long years, means that the marriage market for most people is much more age-bound than it used to be.

Schooling is so intensive that it prevents marriage. Graduation from final schooling (or at least from college) marks you as socially fit to marry.

In an era of dual-earner families, for college-educated women marrying an educational equal may be the best strategy to have both a professional career and motherhood.
Posted by Gruntled at 9:12 AM 1 comment:

If You Want Educational Homogamy, Marry Right After School

The second main finding of Blossfeld and Timm's Who Marries Whom? is that educationally homogamous marriages are most likely in the years after school ends, then tapers off – especially for women. For high school women, there is a rounded spike of marriages to high school men in the late teens/early twenties. For college women there is a sharp spike in marrying college men right after college, then falling off. The college women seem to be catching up on the marriages they postponed because they were in school. For men, the pattern is similar, but not as pronounced.

The longer you wait to marry after graduation, the less likely you are to marry someone with your same level of education.
Posted by Gruntled at 9:29 AM No comments:

Half of American Wives Are Educationally Homogamous

Hans-Peter Blossfeld & Andreas Timm edited an interesting volume a few years ago, Who Marries Whom? Educational Systems as Marriage Markets in Modern Societies. Educational homogamy measures what proportion of married people have spouses with the same level of education that they do.

The main finding is that homogamy rates have increased significantly over the 20th century. Women are more educated than they used to be. This evens out the pool at each educational level, makes it less likely that women would marry up (what Blossfeld calls the traditional pattern) and more likely that women would marry down. And the inverse for men.

For the 40-something cohort in the United States, about 27% of the women married up, 21% married down, and 51% married someone with the same school degree.

In the U.S., women have been more equal to men in primary and secondary education, and high school education is predominant, way ahead of Europe. Homogamy rates are lower than in Europe, but still much higher than the predicted value. This seems to be because women are spread across more educational credentials, so the odds of them marrying within any one of them is lower.
Posted by Gruntled at 5:20 PM No comments:

End of the Spear

"The End of the Spear" is a movie of the true story of a fierce and suspicious tribe who martyr the first missionaries who come to them, only to be won over to Christ in the end. The heart of the evangelical struggle is convincing the tribe that God does not want them to live by the code of vengeance that is destroying them.

The famous story behind this film is of Nate Saint and four other missionary men making contact with a band of Waodani in the jungle of Ecuador in 1956. The men were speared to death. The rest of the missionaries, including the widows and children of the martyrs, continued to try to reach the Waodani. Eventually they broke through and won them over with Christ's love. Steve Saint, son of Nate, came back as an adult to establish a friendship with his father's killers. Eventually Steve and his family moved back from the United States to live with the Waodani as family. The "end of the spear" is not only how the martyrs died, but ending the way of spearing and vengeance.

The best part of the film for me, though, was not the dramatic reconciliation of the killer and the son who would not avenge his father's death. Rather, it was the moment when the gospel was first conveyed to a member of the tribe, who saw the possibility of a better way of life. A woman, who had fled to the Christians as a child after her family had been slaughtered in intratribal warfare, later became the crucial interpreter between the two groups. One of the men of the tribe, spear in hand, asked her why they should trust the Christians not to kill them in revenge. She said that the creator God of the Waodani had a son who was speared, but he did not spear back, so that the people who speared him could have a better life. As a result, his life is changed, and he helps change the rest of the Waodani to a new way. This, I think, is the main point.

The movie has been panned by most critics for wooden acting, and attacked by some anti-missionaries for obscuring the "real" motive of the missionaries as tools of the rapacious oil company. Audiences, though, have liked it better, and the film has been among the most successful of Christian movies. All of which is beside the point to me.

"The End of the Spear" gets the moment of evangelical contact right, when the gospel changes a life.
Posted by Gruntled at 8:20 AM 1 comment: