Young Adult Dystopian Fiction is How Millennials Are Preparing for War


The forces who want the next big war get louder each day.

Young adults are preparing themselves by absorbing story after story about kids being called on to fight a great evil and save the remnant of civilization.  Harry Potter, The Hunger Games, The Maze Runner, Divergent, The Fifth Wave, and many more show the huge market for this fantasy.

The good thing about these stories is that they prepare young people to fight heroically for the right.

The bad thing is that they build the presumption of a coming war for civilization into the taken-for-granted background of our lives.

Howe and Strauss' generation theory predicts a "Crisis of 2020" or thereabouts, when the generations align to produce a major crisis.  The initiative for the war would come from the aging Baby Boomers.  But the people who would do the brunt of the fighting would be Millennials.  And the Millennials seem to be mentally preparing themselves for war.
Posted by Gruntled at 9:11 AM 2 comments:

Hilary Clinton's Reticence About Discussing Her Faith is Common to Mainliners


Hilary Clinton was asked at a town hall meeting to talk about her Christian faith.  She gave a solid answer, typical of mainline Protestants (she is a Methodist).

My study of the Bible, my many conversations with people of faith, has led me to believe the most important commandment is to love the Lord with all your might and to love your neighbor as yourself, and that is what I think we are commanded by Christ to do, and there is so much more in the Bible about taking care of the poor, visiting the prisoners, taking in the stranger, creating opportunities for others to be lifted up, to find faith themselves that I think there are many different ways of exercising your faith.


There is the Methodist Social Creed (1908) in a nutshell.

Her last point, though, also shows why mainliners are reluctant to wear our faith on our sleeves, for fear of unjustly imposing it on others.  "My study of the Bible ... has led me to believe ... [in helping others]  to find faith themselves [such] that I think there are many different ways of exercising your faith."  For those without ears to hear, this seems as if mainliners do not act on their faith.
Posted by Gruntled at 10:31 AM 2 comments:

Millennials Trust CNN the Most for News; Rush Limbaugh the Least


A nifty Pew survey about where Millennials get their news found that their most trusted sources for news were CNN (the only one trusted by more than half), followed by ABC, NBC, CBS, and the New York Times.

The bottom of the list?  Sean Hannity, Breitbart, Glenn Beck, and, at the very bottom, Rush Limbaugh. 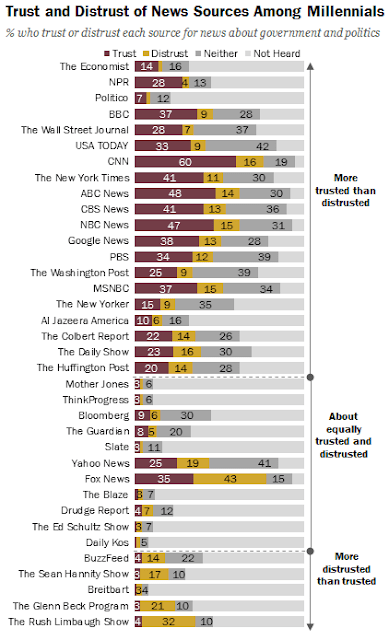 The Ark Park Decision is Bad for Christian Honor


When Answers in Genesis, the Christian ministry behind the Creation Museum, proposed a Noah's Ark theme park, they promised that there would be no religious test to work there.  On the strength of that pledge, Gov. Beshear promised tourism tax credits.

Both the ministry and the government acknowledged that if employees had to proclaim AiG's specific brand of Christianity, the deal would be off.

Then the ministry broke its word, and quietly required a religious test for employment.

Inconsistent with the honor one might expect of a Christian ministry, Answers in Genesis sued for the tax credits.

Surprisingly, a federal judge ruled in favor of the Ark Park.  I think this is a bad decision in law.

But even worse, I believe, is the Ark Park bringing the suit, and accepting money from all the taxpayers while excluding some from employment.
Posted by Gruntled at 8:34 AM 5 comments: