More Love in Domestic Violence Cases Than in Paternity Cases

A Family Court judge visited our "Family Life" class today.  He talked about the young couples he sees in paternity court, and the repeat customers in domestic violence court.

The judge said, as he has said to us in past years, that the mothers in paternity court want the fathers of their children to be involved in their child's life, but hesitate to simply share custody - because, they admit, they don't really know the man they had a child with.

The judge also told us, as he has before, that it takes a beaten woman an average of seven strikes by her boyfriend before she leaves him for good.  She keeps going back to him because, usually, she does love him - she just wants him to stop hitting her.

This led me to a question I had not thought of before.  Is there more love in domestic violence relationships than in paternity relationships?

Yes, the judge answered without hesitation.

Paternity court cases come from high school romances, or the equivalent a few years later, that happened to produce a baby.  They never were a strong couple, and were often not very mature.

Domestic violence cases, by contrast, usually involve couples who are invested enough in each other and in their children to keep coming back even after dreadful blowups.

Professors Don't Like Evangelicals. Let's Be Careful About That. 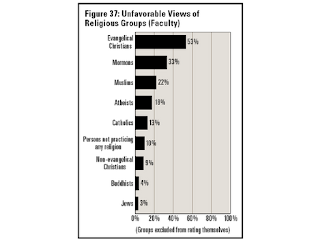 This table comes from a study of American college faculty by the Institute for Jewish and Community Research.

It is worrisome that professors have the most unfavorable view of a group that constitutes about a third of all Americans.

I urge my fellow faculty members to bend over backwards to be fair to evangelical Christians.  It is easy for both groups to feel like a beleaguered minority.  This situation leads to fear and reaction.
Posted by Gruntled at 6:37 PM 2 comments:

Most Americans use social networking sites such as Facebook.  About 60% of all liberals and moderates do, and about half of all conservatives do. This is from a new study by Lee Rainie and Aaron Smith.

I was drawn to three particular findings of this study.

I think this means that moderates are more attentive to what other people think, and less likely to assume that their friends agree with them.

Second, the extremes were more likely to say that they always agreed with the political posts of their friends - 20% of very liberal and 17% of very conservative, vs. only 5% of moderates.

This suggests to me that the extremes are more likely to live in an echo chamber of people who agree with one another.

Third, liberals were more likely to block someone because of their liberal views (28%) than either conservatives (16%) or moderates (14%) were. This part of the study did not distinguish between liberal and very liberal, on one end, and conservative and very conservative, on the other.

This suggests that liberals are more intolerant of differing views than other people are.
Posted by Gruntled at 7:15 PM 4 comments:

The Arab world is having a population explosion now.  This is an important push-force behind the "bloody borders" of Islam that Samuel Huntington cited in the "clash of civilizations" argument. This youthquake is also an important push-force behind the Arab Spring, of democratically oriented youth not willing to live under another generation of tyrants.

But the demographic tide is already turning.  As usual, economic growth, educational improvements for women, and, eventually, democracy, lead to a fertility decline down to replacement levels or below.  The young adult bulge in the Arab countries is scaling back their own fertility as they enter full adulthood.

Stable fertility in the Arab countries and Iran will match the stable fertility in Israel.  All of which promises a future in which the push-force of demography, at least, will ease up on the many strains in that region.
Posted by Gruntled at 8:12 PM No comments:

The Medium-Term Impact of Normalizing Mormonism

Mormons today are like mainline Protestants in the 1950s.  They are church-going, family-oriented, pro-business, mostly Republican, and don't see much difference between taking care of people through the church or through the state. Governor Mitt Romney exemplifies this way of dealing with the world.  Candidate Romney feels obliged to step away from his position, at least temporarily.

But that is not my main point today.

The thing that happened to the mainline Protestant churches was the Sixties. Many good things came from that cultural revolution, especially for the equality of the races and the sexes. But the Sixties were mostly a disaster for the mainline churches.  From that moment their cultural decline began, which has not slowed down to this day.

I think the Mormons are in for their own Sixties.

If Mitt Romney is the Republican nominee for president, as I expect he will be, that will go a long way toward fully normalizing the LDS church as a regular American denomination. In that way, a Romney nomination would do for Mormons much what John Kennedy's election did for Catholics.

But I think the counterpart of Mormon normalization now would be a cultural revolution in the next generation.  Normalizing Mormonism will also normalize Mormon diversity.
Posted by Gruntled at 10:25 PM 1 comment: