Last Sunday I blogged on Sarah Palin. I praised her genuine pro-life commitment in her own life. At that time, the "babygate" puzzle was hot. I had read on a blog that her daughter, Bristol, was pregnant now. I wrote that that settled the mystery of whether Trig Palin was really Bristol's child. The news of Bristol Palin's pregnancy had not yet hit the news, though, and the comments on that post, which were meant as partial praise, got tangled in the then-unresolved babygate question. For the first time in the three years I have been writing this blog, I pulled a post.

Since then I have watched and read with great care just about everything that has come out from and about Gov. Palin. The comments in the blog this week, on posts that were about something else, nonetheless raised many questions about Palin. So today I want to give a more considered response to the one-week celebrity of the Republican ticket.

I believe that we all have the vices of our virtues. Our weaknesses are usually the complements of our strengths. The list below, therefore, alternates what I see as Gov. Palin's strengths with her related weaknesses.

She is smart, charismatic, and attractive.
She did a good job reading a speech written by others, but has so far refused to answer questions in her own voice, speaking her own mind.

She seems to have a strong marriage, has devoted herself to her family.
She has used her office to persecute those she thinks threatened her family.

She has really walked the pro-life talk, having a baby in her 40s that she knew would be very challenging to raise.
She took crazy risks with that baby's birth. I still think there is something fishy about the whole "fly home from Texas" story.

Finding her teen-age daughter pregnant, she pressed the couple to get married, which is her grandchild's best shot at a stable family life.
She said having the baby was her daughter's choice. She has also said she would sign a law banning all abortions.

She has walked the pro-military talk, supporting her son into the Army in wartime.
She has not thought in any depth about the war her son is being sent to fight.

She is a strong Christian and is not afraid to own it.
She believes God supports what she supports -- the president, the war, the gas pipeline (!)

She has walked the pro-community talk, getting involved in her PTA, serving on the city council of her hometown, and serving as mayor.
She used her power ruthlessly - firing the chief of police because he intimidated her, pressuring the librarian to censor books, putting the city in debt for money pit projects like a sports arena instead of necessities like a sewage treatment plant. And she attacks community organizing, the most basic kind of community involvement. This is a real puzzle to me. Up until now, faith-based community service has something Republicans were for.

She has opposed corruption in her own Republican party, including that of its leader, Sen. Ted Stevens.
She ran a campaign for Stevens. She supported the "Bridge to Nowhere" that he championed. She actively sought earmarks for her town, some of which Sen. McCain singled out as examples of abusive pork-barrel spending. I don't mind politicians changing their minds, or even bowing to reality. I do think it a real character flaw when they pretend that they always had the position they have now.

She pushed stronger ethics laws, and undid some of the excesses of her predecessor as governor.
She keeps saying that she sold the governor's jet on eBay for a profit, knowing that this is not true. Knowing that anyone who follows politics knows this is not true. She got rid of the governor's driver -- but she makes phone calls and sends text messages while driving (this may be a pet peeve of mine).

She has mobilized many ordinary people who were lukewarm about participating in this election.
In defending small town, evangelical, gun-using Americans, she sneers at cosmopolitan, mainline, violence-fearing Americans.

She has helped normalize the idea of women in every political office, include President.
She praised Hillary Clinton for putting those 18 million cracks in the glass ceiling. This line brought boos. I expect she will not say that again.

She is a Gen-X "just do it" person who might actually accomplish something.
She doesn't seem to have a plan for anything she does. She reacts to events, doing the opposite of whatever stands in her way.
Posted by Gruntled at 9:43 AM 14 comments: 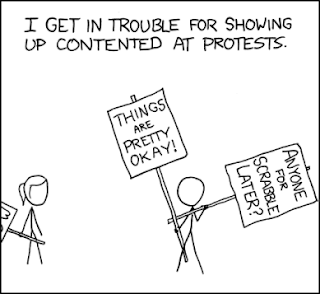 This is a very gruntled comic from the fine folks at xkcd:
Posted by Gruntled at 9:14 AM 2 comments:

Jason DeParle concludes that welfare reform really did work in reducing the rolls, way beyond what anyone expected. And it has not led to masses of destitute people, in part because so many on welfare were already working when the new law forced them to "find" work. As DeParle says, the poor had more options than the reformers expected.

If welfare reform is to keep working, the bureaucracy and the policymakers will have to maintain the will to uphold the time limits and lifetime limits on welfare eligibility.

DeParle admits that he and the other poverty reporters missed the other half of what has worked in welfare reform: the Earned Income Tax Credit. EITC gives money back to working parents. It is the largest poverty reduction program in the country. Both parties support it because it gives money to working poor parents, proportionate to their work and their earnings. Sen. Obama proposes to expand EITC, and many states have or are considering their own versions to supplement the federal program.

The big domestic policy debate, for the poor and everyone else, is over health insurance. The Child Health Insurance Program is the foot in the door for federally supported health care for all. The debate is over whether to expand it to poor adults or not.

DeParle says what welfare reform still needs is more for child care, wage supplements, and transportation. He also thinks that the work requirement, though vitally important, has gone too far in eliminating most job training programs.

DeParle mentions in passing what I think is the biggest failing of welfare reform: it is only aimed at women. Welfare reform drove poor women from welfare to work; not men. This is especially true for African Americans. DeParle reports that about half of all black men are without regular legal employment, compared to perhaps a fifth of white and Hispanic men. The black illegitimacy rate is nearly 70%, vs. less than half than for the other groups. In the black slums, marriage has all but disappeared. For the women in DeParle's study, marriage was a dream on par with wanting a unicorn; none of them had ever been to a wedding.

I think what welfare reform needs if it is ever to actually reduce poverty and dependency is a way to promote marriage, fatherhood, and responsibility among poor men.
Posted by Gruntled at 11:20 AM No comments:

Jason DeParle shows in American Dream that the 1996 welfare reform was a huge success -- way beyond the expectations of either the Clinton Democrats or the Gingrich Republicans who worked together to create it. The combination of time limits, lifetime limits, and work requirements led to a 90% reduction in the welfare rolls.

The hard part of welfare reform comes now, when we have to sustain the will to stick to the lifetime limits as the economy recedes from the Clinton-era high. The easiest thing for welfare establishment to do is just give money to people who ask for it. Enforcing welfare is even more of a hassle for caseworkers than it is for welfare recipients.

That is why DeParle's account is so helpful: welfare reform has been a success for the former welfare recipients. That is why we should stick to it.
Posted by Gruntled at 7:32 AM No comments:

American Dream 2: The Black Working Class as the Crossroads

One implicit question in Jason DeParle’s American Dream is why the black welfare class was so large a proportion of all African Americans to begin with, and why it wasn’t shrinking faster.

DeParle says the black working class is more precarious than other working classes because it is the “crossroads” between the middle class and the slums.
Posted by Gruntled at 12:51 PM 9 comments:

This week I will be blogging on Jason DeParle's American Dream: Three Women, Ten Kids, and a Nation’s Drive to End Welfare.

One of the debates in welfare reform has been about whether the welfare system created the social chaos that led many people to go on welfare in the first place. DeParle traces the families of three women who were single welfare moms in Milwaukee in the '90s back to the Mississippi plantation their ancestors came lived on a century ago. DeParle shows that the pattern of social disorganization of the "welfare plantation" was already well established on the sharecropping plantation, long before the great migration of black peasants to the northern cities and long before the invention of welfare. Women had children with temporary boyfriends, families moved often, the men were often violent and unreliable, and hard drinking was widespread. Moving north made things worse - the loose controls of extended family, country churches, and sheer social surveillance of the rural South broke down in the anonymous cities. But the basic pattern was already set.

This brings us to a central puzzle in the study of African-American family life. W.E.B. DuBois and E. Franklin Frazier, the fathers of black sociology in this country, thought the weak marriages and high out-of-wedlock birthrates among African Americans were a legacy of slavery, carried on with little change under Jim Crow. Herbert Gutman, by contrast, changed the debate when he argued that the black marriage rate was about the same as the white rate in the 1950s, so the subsequent black family breakdown must be due to recent causes. Indeed, it was from the leftist Gutman's argument that conservatives like Charles Murray would argue that welfare caused black family breakdown. Recently, though, James Q. Wilson and others have revisited Gutman's argument, returning to the more intuitively plausible DuBois/Frazier line that slavery had long-term destructive effects on black families.

DeParle is a journalist, using illustrative anecdotes to discuss the effects of social policy (welfare reform). He is not trying to settle the sociological argument about the long-term trajectory of African-American family structure. Still, I think DeParle's case shows strong support for the DuBois-to-J.Q.Wilson side of the argument.
Posted by Gruntled at 7:42 AM No comments:

Today we honor those who labor -- especially those who do the physically hard jobs.

At Centre College, we honor labor by laboring. Centre is its own world. We often begin the term on Labor Day. I think this is appropriate. One of the ways we can honor physical labor is by teaching the privileged (who will probably not be doing much of it) to treat their fellow workers with respect.

Those of you not laboring this day, enjoy your civil sabbath.
Posted by Gruntled at 7:39 AM 6 comments: