Could the Federal Deficit Be a Bridge Between the Parties

A Pew study shows that Democrats and Republicans are very divided about which issues are important. 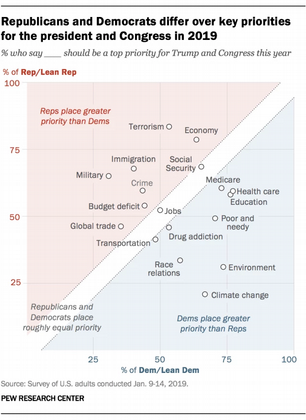 I see one possible bridge: the federal deficit.

Republican ideology is that the budget deficit is bad; Democrats, since FDR, have taken a more Keynesian view that sometimes we can live with budget deficits for a higher national purpose.

However, since President Reagan, Republican policies have increased the federal deficit, while Democratic policies have decreased it.  Under President Trump the deficit is the greatest it has ever been, and is growing gigantically.

Persons of good will in both parties could take this opportunity to at least start talking the same language about reducing the federal budget deficit.  This could allow them to look at the last 40 years of policy to see what actually helps -- and hurts -- to achieve that shared end.
Posted by Gruntled at 8:54 AM 1 comment: