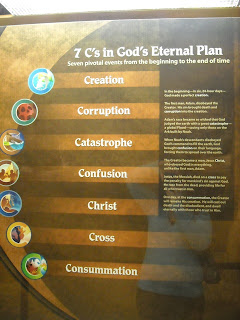 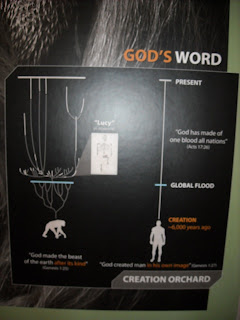 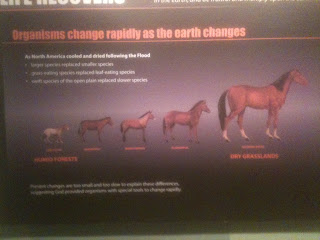 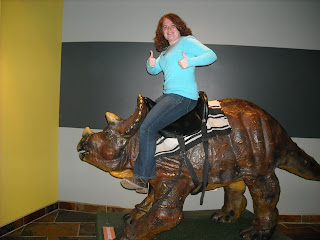 Every few years I teach "The Sociology of American Religion," which includes a trip to the Creation Museum near Petersburg, Kentucky. Dr. David Menton, a retired medical school professor who is one of the scientific advisors to the museum, graciously met with the class and answered many questions.

One question that had been on my mind since our last visit was this: many mainline Christians agree with the Creation Museum that God created the universe and that life evolved within the different kinds of animals. What they do not accept, though, is that all of this happened within the last 10,000 years, nor that the Bible requires us to read it as having a chronology from Adam to now of only six thousand years. There are many old-earth creationists, who are not that far from the museum's young-earth creationists. I asked Dr. Menton what was objectionable in an old-earth creationist view? He offered that if the earth was millions of years old, then death had to have been part of the design of creation, with new life replacing old. The museum's view is that death came to humans and animals (though not, I infer, plants) with Adam's sin. Without sin, Adam and Eve and all the animals created with them would have lived forever, without successors.

This was a detail of the young-earth creationist view I had not encountered before.

Beth Prather, a student in the class, took several fine pictures. The "7 C's" is the basic understanding of history taught by the Creation Museum. "Creation's Orchard" and my own (bad) picture of the development of the horse shows what the museum means by "development within kinds" - micro-evolution, in contrast to the "Evolutionist's Tree" macro-evolution from one spark of life to all living things. The final picture is Beth on a humorous treat at the end of the museum.
Posted by Gruntled at 5:31 PM No comments:

Caitlin Flanagan has a very sad essay in the Atlantic, "The Hazards of Duke." She follows a pathetic young woman who, as a fake "senior thesis" prior to her graduation from that university last spring, sent out a slide show rating all of her drunken, violent sexual experiences with Duke athletes.

This combination of arrogant, sexually exploitative men and needy, self-destructive women can be found at any college. It is the standard stuff of the guaranteed-to-horrify-parents websites, such as Texts From Last Night and TotalFratMove. Flanagan thinks Duke collects, even glorifies, this bad combination more than other schools do. I cannot comment on that.

I did find this essay helpful in thinking about what is wrong with privilege. Privilege as a social structure is not something that privileged individuals can simply overcome or wish away. But when privileged people do not realize their privilege, but instead believe themselves to have earned and be entitled to all of their advantages, then the social sickness grows. And few people are most privileged than moneyed, white, male, athletes at elite schools who have women begging them for sexual exploitation.

Can anyone add to this list? I think it is helpful to define the pole of privilege, to start dealing with it with curiosity, gratitude, and humility.
Posted by Gruntled at 5:39 PM 7 comments:

David Brooks has an interesting reply to Amy Chua's "Battle Hymn of a Tiger Mother." Chua wrote that she pushes her kids hard to master skills such as mathematical calculation and musical performance, harder than other American mothers do. Brooks notes that there has been some fussing against her for being too hard on her kids. He, by contrast, is critical because she does not push her kids enough to learn the harder, social skills.

The book read by all first-year students at Centre this year was John Pomfret's Chinese Lessons. Pomfret first studied in China in the early 1980s. His fellows students remembered the worst days of the communist terror of the Cultural Revolution, and the long gray years of forced collective action afterwards. Pomfret was surprised to find that Chinese people were not inclined to do things collectively - they were much more individualistic than the supposedly individualist Americans, whenever the government let them be.

Putting these two stories together, I see Chua's fascinating piece differently than I did at first. I read her willingness to push her children to strenuous individual achievement as a feature of being closer to the immigrant generation than most Americans are. Now, though, I think Chua's particular kind of achievement push is more Chinese-American than it is just immigrant. She pushes her kids to individual effort, where other upper-middle class American parents push their kids to team achievement.

And the great ecology of America benefits from both kinds of skills, and both kinds of parental pressure.
Posted by Gruntled at 7:46 AM 3 comments:

Sociological Images has a short account of how college home economics departments used to train students on "practice babies" drawn from local orphanages. They note that this kind of training fell out of fashion after baby experts became convinced that infants suffered if they were not attached to one particular person. After 1969 the use of practice babies died out.

It occurs to me that another reason for the disappearance of a large number of institutionalized infants for use in schooling at about that time is that after Roe v. Wade in 1973, the bottom fell out of the "orphan" market.
Posted by Gruntled at 6:40 PM 1 comment:

Several friends on Facebook have been posting an argument made by GOOD, one of my favorite websites and magazines. The post is entitled "In Honor of Dr. King: Let's Solve the Worst Crisis Facing Black Children Since Slavery." The crisis that the author, Liz Dwyer, has in mind is the education gap.

The Sabbath as an Argument for Young-Earth Creationism

This week my "Sociology of Religion" class visited an Orthodox synagogue. When asked by the students about the age of creation, the rabbi promptly said "5770 years." (His son gently corrected him: "5771".)

This exchange prompted a student to ask one of her Orthodox friends how, exactly, he was taught the young-earth view growing up. He said that his parents relied on the Bible - as Christian young-earth creationists do, as well. However, this Orthodox Jewish family made a somewhat different argument than the Christian arguments that I have met with. They cited God's gift of the sabbath as evidence that the seven days of creation are normal, 24-hour days. God worked for a normal week, and then rested a normal day. Thus, when we are commanded to work six days but honor the sabbath, both weeks are of the same kind.

A sabbath-based argument strikes me as a distinctively Jewish way of making the case for young-earth creationism.
Posted by Gruntled at 12:29 PM No comments: