Society benefits if we have smart people in all jobs.

The main point of The Bell Curve was not really about race.  Rather, Murray and Herrnstein were lamenting that the great IQ sorting machine was pouring our smartest people into a smaller and smaller number of occupations.  This is a loss to the rest of society.

Which is why I think it is such a bad idea for the New London, CT police department to reject a potential officer because he scored too high on an IQ test.  They argued that smart cops will get bored and leave, so it is not worth hiring and training them.

Police work, of all work, requires constant judgment calls about how to best use the great power of the state.  It requires more smarts than the average job.

Moreover, the leadership of the police department will eventually come from the new officers working their way up the chain of command.  No smart patrol officers now means no smart captains later.

Hate-Filled Religious Terrorists Think They Are the Good Guys

This is what a hate-filled religious terrorist looks like: 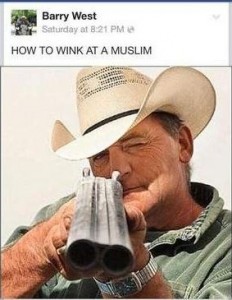 Barry West is a County Commissioner in Tennessee.  He posted this image on Facebook, which then went viral.  He was embarrassed enough to take it down, but not to take it back. He says he is “prejudiced against anyone who’s trying to tear down this country, Muslims, Mexicans, anybody.”

Objectively, he is threatening violence against people he defines as enemies of his way of life because they are of a different religion.  That is what "hate-filled religious terrorist" means.

What he thinks he is doing is defending the good against people who are objectively evil.  Which is exactly what the terrorists who attack our country think they are doing, too.

We will not understand what the terrorists who attack us are until we see that they think they are the good guys defending their way of life, just as we do.

I am not arguing that the 9/11 attackers or the Boston Marathon bombers were actually good guys.  They were actually hate-filled religious terrorists who did very evil things.  I am arguing, though, that when Americans make the same kinds of threats, they are becoming the thing they hate, while imagining they are doing the opposite.
Posted by Gruntled at 6:48 PM 37 comments:

I am as opposed to the National Rifle Association as anyone.  Nonetheless, I think it very wrong that an eighth grader in the Logan County, WV, middle school was suspended and taken away in handcuffs for wearing an NRA tee-shirt to school.

The First Amendment protects the others, including the Second.
Posted by Gruntled at 1:04 PM 2 comments:

Developers of Christian homeschooling material report that there is a growing market for material that either teaches a range of views about creation, or goes all the way to teach theistic evolution.

I think this is an encouraging development in the culture war between homeschooling evangelical Christians and regular-schooling mainline Christians.

Most American Christians accept the "young earth" view that the universe was created by God pretty much as it is now within the last 10,000 years.  A sizable minority, though, believe the "theistic evolution" view that God created the universe a long time ago and has guided evolution since.  This is roughly the division between evangelical or traditionalist Christians, on the one hand, and mainliners, on the other. The number of Christians who believe in purely naturalistic evolution is vanishingly small (and hard to explain without contradiction).

I think the real issue for most young earth creationists is not how old the universe is, but that God made it.  For most educated biblical believers of all stripes, the shackles of the dogma that the universe is only 10,000 years old is an embarrassment, the kind that leads young people away from the faith altogether. The fact that there is a growing market for more open-minded creationist accounts shows that there is common ground to be developed across one of great divides among American Christians (which is to say, among most Americans).

And that common ground is a triumph for centrism.