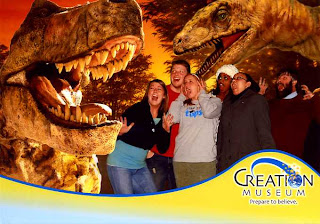 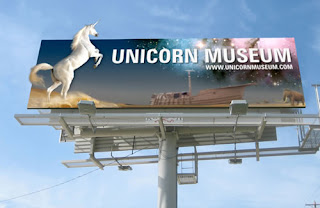 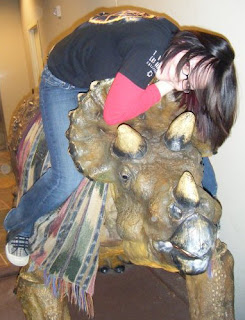 I am giving a talk to the Centre College parents today about the Creation Museum controversy. I have blogged about the museum before. Today I just want to give you a few fun pictures:

A fine student riding the little Triceratops with a saddle.

A parody (sadly, not a real place).

A picture the museum can create for all visitors, using a green screen.
Posted by Gruntled at 11:13 AM No comments:

Brad Wilcox has a report in the Institute for American Values series on black families, about the effect of religion on urban families. Churches are the main institutional anchors of the code of decency in the city, he conclude, and thus are vital to promoting marriage. All families are more likely to marry if they are religious. This is especially notable for black families.

Among parents in all ethnic groups (black, Latino, white), the married are much more likely to be regular church-goers, typically by 20 percentage points. For example, among black mothers, 63% of the married women are regular church goers, vs. 40% among the single mothers. The comparable numbers for Latina mothers are 50 and 33; for white mothers, 42 and 21. Men show similar gaps, though with lower rates of church going than women.

African Americans are the most religious large ethnic group in America. They are also the least married.

Church can't entirely close the ethnic marriage gap. Even religious African Americans with kids are still less likely to marry than comparable people in other ethnic groups. But religious institutions do help close the gap.
Posted by Gruntled at 11:13 AM 2 comments:

Claudia Sitgraves has produced an interesting research summary on "The Benefits of Marriage for African American Men" for the Institute for American Values. She reports that married black men work more than single black men, and make more, too -- 14 - 18% more in earnings. This is not so surprising - married men usually work more, and harder, and thus earn more than single men in all groups.

The surprising finding came from a longitudinal study (by the late Steve Nock) the followed black men through various stages of the life cycle. He found that the married men started earning more than most single men, as expected. He also found that those single men who nonetheless started earning at high levels were less likely to marry than their lower-earning single counterparts. The conventional wisdom is that higher-earning single men are better marriage prospects. It may be the case the higher-earning single black men are so sought after that they can reap the benefits of marriage without marrying.

This finding is a little disheartening for marriage proponents. It is worth following up.
Posted by Gruntled at 8:30 AM 1 comment:

How Bad is Bad for Poor Black Families?

A survey by the poverty program firm Maximus in New Orleans studied food stamp families, both the women receiving food stamps for their children and the men who fathered the kids. This was a study of poor families, but since 80% were black (at a time, pre-Katrina, when the city was 67% black), this is mostly a study of poor black families. Indeed, this is a good picture of some of the worst-off black families in the whole country -- poor, unmarried parents, who were poor even in a poor city in a poor state.

Ronald Mincy and Hillard Pouncy, two veteran black family researchers, analyzed the data hoping to find a "magic moment" when policy makers could promote marriage. What they discovered, though, was that most of the relationships were over even before the child was born. 70% of the women already had a child before the focal child of the study, and half of the fathers of child #1 were not the same as the father of child #2. Not surprisingly, the more children a man had by different women, the less he was likely to invest in any of them. Somewhat surprisingly, men with part-time jobs were less likely than men with full-time jobs to have their children stay with them even sometimes; it is likely, though, that the part-timers are living with other women, possibly with other children, and don't want his other kids in the house.

The main reason that the couples gave for not marrying was that they didn't have enough money -- though most of the women, and nearly all of the men, were working (sometimes under the table). Probing further into why the parents didn't marry, 2/3rds of the women and (somewhat surprisingly) 2/3rds of the men said they didn't think the other parent would be faithful.

Without marriage, half the men had drifted into a sometime involvement with their child, and another quarter had disappeared altogether. Even the "involved fathers" thought "supporting their children" meant giving money and gifts sometimes, on an irregular and informal schedule.

This study of the poor of pre-Katrina New Orleans is just one case study. It does, though, give us some baseline numbers of how bad the family situation is of the worst-off black families in America.
Posted by Gruntled at 11:06 AM 6 comments:

The Gruntled Center has exhibited 1000 posts in its three-plus year run, and counting. That is 224 thousand page views. The most popular post: Palin's Religion.

Just thought you should know. Many more where that came from.
Posted by Gruntled at 6:06 PM 3 comments:

This week in my Family Life class we are working through the fine series of black family studies done for the Institute for American Values over the past few years. Their major report, The Consequences of Marriage for African Americans: A Comprehensive Literature Review, is our starting point. It will not surprise readers of this blog that they found that marriage is beneficial to African Americans in many ways. In several comparisons between black and white marriages, whites tend to benefit more, especially white women. The researchers also found suggestions that black marriages are less happy and more conflict-ridden than white marriages.

This led me to wish for one control that the authors of this review of existing literature couldn't ask, since it wasn't in the original studies: social class. African Americans are, as a group poorer than white Americans. Poorer people, as as rule, have less happy and more conflict-ridden marriages. In reading the rest of these studies, therefore, we will be looking out for studies of the quality and benefits of black marriages controlling for class.
Posted by Gruntled at 6:02 PM 2 comments:

The Presbyterian Church (USA) has a clause in the Book of Order specifying that the congregation holds the property in trust for the whole denomination.

I believe the legal issue is settled. Everyone should accept that. No more lawsuits gambling that some court will take the law into its own hands and decide differently.

However, I think it is also reasonable to let the departing congregation have their church building at some reasonable cost. This should be decided on a case-by-case basis. There might be some specific church buildings that the denomination will not part with at any price. That is a question for the presbytery, I believe.

As a rule of thumb, though, I think that if the congregation is willing to pay back to the denomination whatever funds were given or loaned to it by the denomination, plus some reasonable premium for years of good will - say, 10% more, to pick a number out of the air -- then the denomination should let them go, and godspeed.

I hate unilateral divorce, but at a certain point, if one party has already decided to leave, playing dog-in-the-manger with the stuff that remains does no one any good, and engenders further ill will.
Posted by Gruntled at 10:38 PM 2 comments: