I Need to Want Less 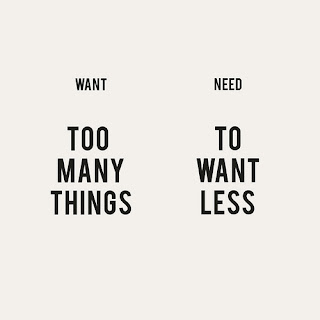 I thank Good, the most gruntled of magazines, for pointing me to Erin Hanson's project, "Need to Want Less."

I think this is a wonderful personal discipline, and a real help in simplifying your own life.

I think wanting less is a likely path to happiness. I am more confident that it is, at least indirectly, a path to meaningfulness, because it helps you weed out the unnecessary things in your own life.
Posted by Gruntled at 6:49 PM 3 comments:

This is good: it shows that more education and more persistent work reap better pay.

This is also good because it helps chip away at the myth the women, on average, earn less than men because of sex discrimination.

Women earn less than men, on average, because women who are not single, childless, and young tend to make choices that trade earning for control of their time for family life and for doing only work that they want to do.
Posted by Gruntled at 6:23 PM 8 comments:

Five years ago today I began The Gruntled Center: Faith and Family for Centrists.

Today, to celebrate that anniversary and to mark the broader path I want to chart, I am changing the subtitle of the blog. Hereafter I will post to The Gruntled Center: Exploring the Happy Society.

I am developing a new course, "The Happy Society," which will explore the philosophical and empirical roots of happiness in the institutions of society, and in society as a whole. I think the core dynamic of what makes for happiness and unhappiness in social life as a whole is trust versus fear.

As part of this class, as well as for my continuing teaching on family life, I envision a book on Happy Families. This book would explore the seeming paradox that having children usually diminishes a couple's happiness in their marriage, but at the same time gives them the greatest sense of meaningful accomplishment.

I think the relationship between happiness and meaningfulness is the deepest and hardest puzzle that we will explore in studying the happy society.

I welcome your participation in the adventure.
Posted by Gruntled at 9:19 AM 7 comments:

Spreading Fear is Bad for Democracy

Suppose we told the Iranian Mullahs that they are an evil, backward, dangerous, ignorant bunch of theocrats, and that nothing will help that unhappy land until they are gone. Suppose we told them we were going to do everything in our power, short of war, to consign them to the dustbin of history where they belong. That has my vote for candor. But perhaps it is not in our interest to say so?

I tend to think that, at least with adversaries, a little studied ambiguity is often the best. If the bad guys think you might just be crazy enough to send them all to where they get the 72 virgins, or whatever, maybe they will behave themselves.

I believe this whole approach to our adversaries - both the candid and the ambiguous versions - makes the world worse, and does not serve the interests of the United States or, in this case, the Iranian people. Striking fear in others makes them worse, makes them less rational, less open to persuasion about where their true interests lie. And it does the same to us, too. Moreover, approaching the leadership of another nation as children who we have to make behave - who we have a right to make behave - makes even the most reasonable people in that nation reject us for our arrogance. We would feel the same way if other nations treated our leaders that way, even when strongly oppose our own leaders.

In the particular case of Iran, I am very hopeful about the future of democracy in Iran - more so than in just about any other Muslim nation except Turkey. Iran has an elected government and a constitution that, on paper, vests power in that elected government. They have plenty of pragmatists who want to have peace and get on with business, as every government does. Right now they have a group of unelected religious authorities who overrule that elected government, and keep its most strident and dangerous party in power. Yet, as the stolen election showed, there are already cracks in the religious establishment.

How can we promote the rule of law in Iran? How can we get the religious authorities to back off and let the electoral process proceed? I believe we are more likely to strengthen the moderate elements in Iran, and throughout the Muslim world, by being reasonable, by finding common ground wherever we can, by communicating to the Muslim world that Americans are not their enemies. This will be a rocky process, and will be strongly resisted by religiously pugnacious elements (in both countries). Making Iranians, in power and out, believe that we are crazy and should be feared strengthens the worst elements there and makes peace and freedom less likely.
Posted by Gruntled at 9:33 PM 15 comments:

Which Things Should America Apologize For?

I recently wrote about my puzzlement at what those attending the "Restoring Honor" rally thought had dishonored America. In response, "Whit" cited President Obama's "apology tour." The so-called apology tour is a good example of my puzzlement about what it is that Glenn Beck and followers are afraid of.

Human Events magazine, no friend of President Obama's, listed what they thought were the top ten "apologies" made by the president. The president said that the United States has, at times, acted unilaterally and arrogantly in relation to Europe and Latin America. This seems to me obviously true. This does not constitute apologizing to thugs, as Whit contended. Likewise, his offer to "communicate with the Muslim world" is a good thing, and allowing that we have not been perfect is also obviously true.

All of the apologies listed by Human Events sound to me true and helpful in establishing just and sensible relations with the rest of the world.

What I do think hurt America's honor were torture, imprisonment without charge or counsel, and unilateral force without even attempting to work with our allies. The Bush administration took the huge good will that the United States had around the world after 9/11, and turned it into shame by these practices.

And then, incomprehensibly, President Bush could not think of a single mistake his administration had made.

Every person and every government makes mistakes. Acting arrogantly destroys just relations with others, even our allies. Trying to talk to opponents is a necessary foundation for reducing conflict and for any chance of helping them improve. Admitting your mistakes, even admitting that you are capable of mistakes, is moral, true, and just common sense.
Posted by Gruntled at 9:24 AM 24 comments:

Privilege is a Knowledge Problem

Some people have privilege. This obviously hurts those who do not have that privilege.

Privilege also hurts the privileged. The greatest privilege is not knowing that you are privileged, so that you don't notice or think about your (our) comparative unearned advantage. Privilege can make the privilege incurious. This produces a kind of parochialism.

When I teach college students about their degrees of relative privilege, the most privileged sometimes feel angry, but most of them feel guilty. And don't know what to do next. Many consciousness-raising approaches to teaching about privilege stop there. Some are even glad to provoke feelings of guilt.

I think a better approach to teaching about privilege is to treat it as a knowledge problem. Curiosity cures unacknowledged privilege. Being curious about people who are not like you is the best path to living justly with others, and serving others as our privilege makes us able.
Posted by Gruntled at 11:22 AM 3 comments:

Glenn Beck's "Restoring Honor" rally at the Lincoln Memorial yesterday was a civil religion rally. It was a pageant of American patriotism and generic Christianity, treating the two as identical. The heart of the event was an awards show for a few people Beck liked, with a fund-raiser for a military charity added on. Beck's own speech, coming about two hours into the rally, yearned for new heroes, new George Washingtons, to step forward and do ... something.

The great puzzle of "Restoring Honor" came from trying to figure out what Beck and his audience thought was threatening America's honor. A careful listener would hear several references to "wallowing in the scars" of American history, one section against those who "spread fear," and a single reference to leaving our children with large debts. Beck had to deny that he was spreading fear - by his account, he was just telling the truth about a threat that loomed like the iceberg before the Titanic.

But what iceberg Beck thinks he sees is a mystery.

I thought that there might be an unspoken subtext that everyone present knew but thought it too politically incorrect to say. One of my Facebook respondents thought that what drove the rally was a nativist fear of them, led by an alien brown president. I do not think that is what drove this rally. The crowd was, indeed, almost completely white, but the performers very pointedly were not. Beck made much of the fact that the date and place for his rally were the same as for Martin Luther King's "I have a dream" speech, which was genuinely cheered by the crowd.

Another correspondent suggested what I think is a more plausible explanation: archetypes of Good versus Evil, of heroes and villains, that makes fantasy books, graphic novels, movies, and video games so popular. Beck's sermons were celebrations of America's goodness and heroes coupled with a call for ordinary people in his audience to be heroes today. He not only did not specify what the heroes should fight against, he repeatedly rejected "wallowing in the scars" - that is, thinking and talking about what had been wrong with America - as the very source of evil.

There was nothing wrong with what was said and celebrated at the "Restoring Honor" rally. The content was so vague, though, that I don't think many would turn out for a repeat performance.
Posted by Gruntled at 5:48 AM 24 comments: