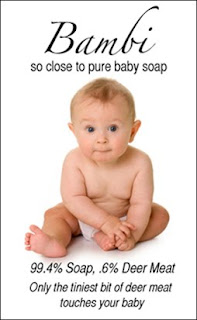 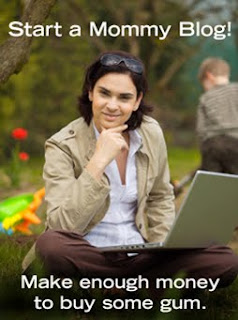 This is a wonderful, silly website about children and parenthood. The opposite of cutesy. My sister, a tough mom, recommended it.

I particularly like the ads from their "sponsors," such as these:
Posted by Gruntled at 11:50 AM 5 comments:

A woman who conceived through an anonymous sperm donor is now suing to get his identity. She says "I don’t think it right that any person should be forbidden from knowing their fathers’ identities or family health information."

I support the movement to spell out more explicitly what the duties of sperm donors are, and just exactly how secure their anonymity is. But I think it wrong to try to get the court to break a contract or invent a rule. Making rules is what the legislature is for.
Posted by Gruntled at 2:07 PM 9 comments:

A justice of the peace in Louisiana will not marry interracial couples because "I don't want to put children in a situation they didn't bring on themselves. In my heart, I feel the children will later suffer."

Louisiana has given us more racial weirdness than any other state. Plessy v. Ferguson became a federal issue when Louisiana's counting of racial fractions pitted the "black" railroad car against the "quadroon" Homer Plessy. Louisiana law still recognizes racial fractions down to 1/32nd, though they are mostly dead letter. Mostly, but, as we see, not quite.

I hope this one can be laughed out of practice, and Justice Keith Bardwell can be shamed out of office.
Posted by Gruntled at 11:06 PM 14 comments:

Spirituality Makes Her Clothes Fall Off

I am not sure if this scientific study is really ripe, but it sure does have an interesting hook.

LiveScience, an MSNBC blog, reports on a study from Jessica Burris at the University of Kentucky on what correlates with sex for a sample of 353 undergraduates. Among other questions, Burris gave them a Spiritual Transcendence Scale measure (with which I am not otherwise familiar). This is the eyebrow-raiser:

For women, however, spirituality was the strongest predictor for the number of sexual partners, the frequency of sex, and the tendency to have sex without a condom.

I am inclined to think that sexually loose college women get detached from the churches they were raised in, but didn't want to go all the way to atheism, so they stopped at "spiritual."

Either way, I hope someone follows up on this with a fuller study.
Posted by Gruntled at 9:58 PM 10 comments:

In Sunday School this morning we were honored with a real pro talking about the death penalty.

Steve Bright, a Danville native and now president of the Southern Center for Human Rights was talking about some truly dreadful death penalty cases. The big picture of the death penalty doesn't look much better. The people on death row and already executed are almost all poor guys with terrible lawyers. They are criminals, and did horrible things. The injustice is not that they are in prison. The injustice is that rich guys who do the same thing can afford competent lawyers who plead them into life sentences rather than execution. The further injustice is that many of the poor guys committed their crimes in the few places where the prosecutor seeks the death penalty - especially if you live in Houston, the death penalty capital of America.

The most striking sociological point that Bright made was that juries that convict in death penalty cases are mostly in white-flight counties around non-white cities. The fear that led to the flight in the first place gets played out in court when the overwhelmingly white juries sentence to death predominantly non-white vicious criminals with bad lawyers.

I asked if there were any practical way to reserve the death penalty for the most dreadful crimes - Timothy McVeigh, Ted Bundy, Charles Manson. Bright said, in effect, probably not. For one thing, the most dreadful criminals have been able to plead to life imprisonment in exchange for revealing further details of their crimes. For another, more important reason, it is up to the local, elected prosecutor to decide whether to seek the death penalty or not.

As a centrist, I think it would be possible to write a very narrow statute specifying when the death penalty could be sought that would distinguish cold-blooded mass murderers from stoned junkies who shoot clerks in the course of robbing liquor stores. That is a question best addressed by the professionals.