A really tiny baby name poll. But still, I found it gratifying, somehow.
Posted by Gruntled at 6:53 AM No comments:

Sociologists Neil Gross and Ethan Fosse are trying to figure out why professors in general, and sociologists in particular, as so liberal. Patricia Cohen has a pretty good story about it in the New York Times. They argue that the academy has become "politically typed" on the analogy of some jobs becoming "gender typed." It is not that conservatives get all the way through Ph.D. programs only to get turned away from professoring jobs by political discrimination. Rather, conservatives don't even start down the path of professor training. They are more likely to head to business and the professions in the first place.

I am wrestling with this argument. I think it is mostly true. I see a broad political mix of undergraduate students. Of those who head on to graduate school to be professors, quite a few are very liberal; almost none (actually, none that I can think of) are strong conservatives. The liberals expect the academy to be an easier and friendlier place for them to make their way than any other occupation would be. I attract and encourage centrists, some of whom go on to academic careers. Some of them are, indeed, pushed left by academia, though just as often they are pushed more to the center in reaction. This center movement is especially true for religious and family-oriented centrists.

In my own case, as I have moved more to the center, I have encountered some resistance from liberal academics who regard liberalism as a requirement of being a professor. Just recently I proposed a family sociology textbook that would be an empirical and centrist compilation of the basic facts of most people's family lives. A potential publisher said, reasonably, that such a book would be so controversial that it would be too risky to publish - not enough professors would assign it to make it financially viable.
Posted by Gruntled at 7:21 AM 11 comments:

The New York Times has a story about the Starbucks-owned coffeehouse in Seattle, Roy Street Coffee and Tea, that I wrote about earlier. I give Howard Schultz, the CEO of Starbucks, full credit for trying to turn his enormous company around. Trying local, and local-feeling, coffeehouses without using the Starbucks name is OK with me if it produces actual third places that serve good coffee.

I was surprised by one detail in the Times story that they do not comment on: Roy Street Coffee and Tea serves microbrew beer. I have never heard of a Starbucks serving alcohol before. Has anyone else run across this development elsewhere?
Posted by Gruntled at 11:37 AM 3 comments:

She Makes Most of the Financial Decisions, Even When He Makes More

The Pew Center report on marriage and work had an interesting chart on one of my favorite minor topics: who makes the financial decisions in the family?

The survey asked "When you and your spouse make decisions about managing the household finances, who has the final say?" Pew report combined husband and wife reports under three categories: "mainly wife," "mainly husband," and "share." The last combines two different options, "sometimes me/sometimes my spouse" and "we decide together."

Pew wanted to know if the answer to this question varied depending on whether husband or wife earned more. It does. What strikes me as most interesting, though, is that under either condition, she is more likely to make most of the financial decisions. Here are the two tables.

When the husband earns more
When the wife earns more
I think many couples make a distinction between daily finances and big ticket items. My hunch is that in most couples, the wife makes more of the daily decisions, and the husband has a greater role in the major financial decisions. The Pew results do not capture this distinction.

Still, the overall result is interesting: she is more likely to make most of the financial decisions, even when he makes more.
Posted by Gruntled at 9:09 AM 2 comments:

A Fifth of Wives Make More Than Their Husbands

The Pew Research Center reports that 22% of wives now make more than their husbands. This is up from just 4% in 1970.

Still, I think it is safe to say that there has been a real rise in the proportion of couples in which she makes more than he does.
Posted by Gruntled at 1:33 PM 4 comments:

Fascinating Developments in the House of Dobson

Dobson is now creating a rival radio program, co-hosted by his son Ryan. An anonymous source at Focus on the Family said Ryan Dobson, who is divorced and remarried, could not be the voice of the organization under their policy.

Evidently James Dobson's policies are a little more flexible when he focuses on his own family.

Meanwhile, Focus on the Family, under new boss Jim Daly, has become less partisan and more devoted to hands-on helping with troubled families. Daly said he wants to work with Democrats. He praised President Barack Obama as a role model for African-American fathers. Focus now has a program that finds families to adopt children who have been in foster care.
Posted by Gruntled at 7:50 AM 8 comments:

My essay, Rebuilding the Presbyterian Establishment, was published by the Presbyterian Church (U.S.A.) as an occasional paper of the Re-Forming Ministry project, led by Barry Ensign-George. It generated some responses. Barry has gathered five of these responses into a new Re-Forming Ministry paper, Beyond Rebuilding? Shaping a Life Together. For the next six Sundays I will respond to these essays. (None of what I say is Barry's fault).

The first essay, "Another Possible Church for a New Day," is by José Luis Casal, General Missioner [Executive Presbyter], Tres Rios Presbytery. He does not take up my argument for a Presbyterian establishment directly. He makes a general case for a missional church, one that is responsive at the local level and not centralized power. In this we agree.

Casal says the basic question is simple: "are we to save a system (structure) or humankind?" I think this is a false distinction. The church, like any social structure, is a tool for getting a job done. I don't think saving humankind is the church's job (that is a little above our pay grade), but I agree with Casal, as he says elsewhere, that the church is meant to proclaim God's salvation of humankind. Christians can't do the job God set for us without the church. We have to "save the structure." The real question is how.

Casal supports the proposal that is now before the church for a simpler, more mission-oriented Book of Order. I support this, too. He believes this will mean "less book and more order." I do not think human organizations work that way. The church is not a spontaneous order like a flock of starlings, made by each individual following simple rules. It is an enormous project that derives much of its ability to serve the world from the fact that it is organized to do things decently and in order.

Casal believes that what has been crippling the PC(USA) is that too much power has accumulated in the center. I think the problem is that we have evacuated most of the authority that the center used to have. Instead we have tried to fill the vacuum with procedures of participation without any coherent vision of what we are trying to do. Articulating the vision and convincing the church that it is just and godly is what an establishment is for.

It has been my experience in these discussions that people who say that the church should get rid of its constraining centralized structures turn out in practice to mean "tear down all the structures, except mine." José Casal does want the church to keep its centralized ethnic advocacy groups. In fact, he wants to expand them, centralize their coordination, and create more paid staff to run them. And General Missioner Casal wants the church authorities to insist on the biblical mandate of tithing to solve the church staff's funding problems.

I do not think that Rev. Casal has described another possible church for a new day. I think he has described the church we have now, with more money and more advocacy structures. That is exactly the program of the vestigial establishment that we have now.

Coffee Coal in Your Stocking 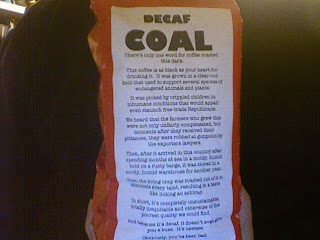 Aldo's, a fine coffee house in Mt. Lebanon, PA, offered this excellent prank gift for Christmas.
Posted by Gruntled at 7:55 AM No comments: