David Brooks is Right That Religious Extremists Seek Glory, But Mostly Wrong That Nationalism Is the Best Cure

David Brooks has a sensible column about religious extremists.  What they want, he says, is not the mundane bourgeois solutions of the settled ruling classes - better education and more jobs.  Brooks is right that they have the "thymotic urge" for a glorious, heroic life.  This is an anti-Enlightenment urge that we still see in all cultures, especially among gangs of young men.

Brooks writes "You can't counter a heroic impulse with a mundane bourgeois response.  You can only counter it with a more compelling heroic vision."  This is correct.

However, Brooks goes on to say that the best available heroic vision is nationalism.  Here I think he errs.

Nationalism is the religion of the modern masses.  It is better than nothing.  But nationalism has the great drawback of producing nation-state wars, which are even worse than terrorism.  The Islamic State is trying to create a Sunni Arab nation-state precisely to mobilize that nationalist impulse.  In that they are trying to go Al Qaedi and its imitators one better, to create a more enduring, modern structure.

But nationalism is not a great religion.  It falls far short of the beatific vision.  It is a very limited god.  It may be a help in countering gang-level visions of the heroic impulse, but it is itself a dangerous prescription.

Posted by Gruntled at 9:49 AM No comments:

This story would be amusing just for the fact that a Martin Luther Playmobil toy exists at all. 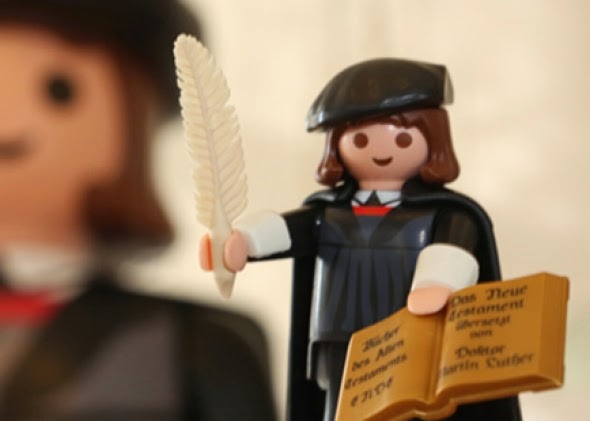 That it is selling out is even more amazing.

As we approach more Reformation semi-millennium anniversaries, I hope for a whole Diet of Reformers.  Can't wait for John Calvin.
Posted by Gruntled at 10:46 AM 1 comment:

Why Courage Is Necessary for Happiness

I have written before that fear is the solvent of the happy society.

It came to me today that courage is a necessary virtue for happiness, because every kind of fear makes us unhappy.
Posted by Gruntled at 5:14 PM 3 comments: