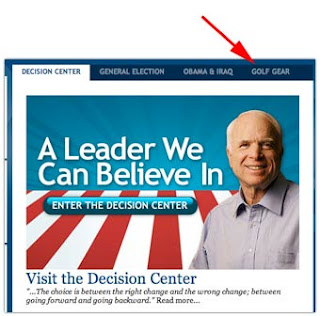 Senator McCain has apparently given up his attempt to prove that he is a country club Republican. Last week his website looked like this:


Now on his website, "Golf Gear" has given way to the more prosaic "Strategy."


(Thanks to Talking Points Memo for the screen capture of the old website.)
Posted by Gruntled at 12:57 PM 2 comments:

Hurrah! Habeas Corpus is Back!

The Supreme Court made a very welcome and long-overdue decision yesterday restoring the most fundamental legal right to all American prisoners. I have felt that the worst scandal of the lawlessness of the past few years has been the way our government has imprisoned people they don't like without charge or trial for years and years. These prisons were deliberately placed where American lawyers could not get, to prevent them from even meeting with their clients or petitioning for a charge. And U.S. citizens were tossed in along with foreigners, with no more protection than Soviet prisoners used to have.

To my mind this is a disgrace worse than our tortures, and that is saying a great deal.

A majority of the court had the legal sense and the courage to make the right call. The fact that the Supreme Court of the United States has to have courage to defend habeas corpus is a sorry commentary on how low things have sunk.

Let the healing begin.
Posted by Gruntled at 9:31 AM 8 comments:

Michael Luo's politics blog The Caucus carried an interesting story about a new group, Matthew 25, working to connect Obama to evangelicals. This is an interesting and, I think, very worthwhile effort. The official Democratic Party tends to be a bit paranoid about doing anything official with evangelicals, so it makes sense to have a semi-independent group making the connections.

What interested me especially in this story was a report from John Green, one of the best quantitative religion-and-politics scholars in the country, on the specific kind of evangelical that the Obama campaign could reach.

Green estimates that of the quarter of Americans who are evangelicals, perhaps 10% are on the left, and about 40% are of the Religious Right that has been tied to the Republican Party for a generation. In the middle, though, are a centrist group making up about half the total. This is a group that has often been politically uninvolved in the past. Now, though, centrist evangelicals have been becoming more active in a new range of social issues, especially AIDS, global warming, and, most importantly, global poverty. These issues are a natural path to Democratic candidates.

Green says the centrist evangelical group is growing.
Posted by Gruntled at 8:34 AM 1 comment:

The Core Business of Social Science

C. Wright Mills, in his classic introduction to sociology, The Sociological Imagination, makes this fascinating aside: The social science movement was born in the mid-19th century to “turn the troubles of lower-class people into issues for middle-class publics” (84).

Each of the social sciences had developed more general theories, general tools, and some capacity to examine other classes and facts that are just facts without being problems.

The bread and butter of the social sciences, especially sociology, though, remains finding middle-class solutions to poor-peoples' problems.
Posted by Gruntled at 5:24 PM No comments:

Fareed Zakaria is a pretty smart guy. His new show, "Global Public Square" on CNN, brings together a pretty smart bunch of people who know about the rest of the world. In the second half, he interviews someone who makes things happen in the rest of the world. This is very encouraging. On the first show he interview Tony Blair. Today, on the second, he had Henry Kissenger. The panel this week consisted of CNN foreign correspondent Christiane Amanpour, former Mexican foreign minister Jorge Castañeda, former Israeli deputy prime minister Natan Sharansky, and a Muslim woman working in Canada whose name I missed (help here would be welcome).

I have argued before that TV is a middle-brow medium at best. This show pushes the bar up a bit. I predict that it will have only a tiny American audience, even among political junkies. Nonetheless, if CNN can stick with it, I think they will be performing a public service.
Posted by Gruntled at 2:11 PM No comments: