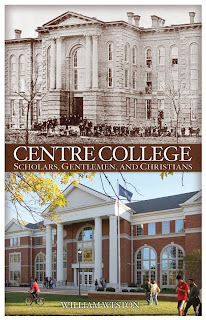 I am pleased to announce that my history of Centre College will be released today during Homecoming.
Posted by Gruntled at 8:14 AM 2 comments:

The Elite of Hard-Working Generalists

The New York Times reported on a gathering of scholars of the Elites Research Network. They are trying to figure out how, exactly, the richest people got that way.

The most sensible view was offered by Sudhir Venkatesh, moderately famous for his turn as "gang leader for a day" that was profiled in Freakonomics and in his own book of that name. He said

The most interesting substantive finding in the article comes from Michael Lindsay's interviews with top corporate leaders. He found that most did not come from big money, nor did they start with a large inheritance. They were likely to have attended top colleges, and a significant proportion went on to Harvard Business School. Lindsay's big finding, though, is that they were generalists who got a big break early.

By being generalists, and looking for opportunities to understand how the whole business worked, they put themselves, I believe, on the path to be presidents. This is the path that Jim Collins identified in the excellent Good to Great of what makes for the best leaders. People who understand the whole operation are more likely to become the head of any organization, large or small. Those who understand the largest and most profitable companies thereby also become, whether they aim to or not, part of the national elite.
Posted by Gruntled at 8:32 AM 1 comment:

Are Fear and Mistrust at the Root of the Culture of Poverty?

The New York Times has a fine article on the return of "the culture of poverty" as a concept in sociology. The very idea was suppressed by liberal academics who thought it meant blaming the victim of poverty. Yet culture matters for everyone, and eventually the empirical strikes back.

The article cites Robert Sampson's studies in various Chicago neighborhoods. He concluded that

Income levels did not necessarily explain the difference, Professor Sampson said, but rather the community’s cultural norms, the levels of moral cynicism and disorder.

Cynicism and disorder, fear and mistrust - these are the things that create the dysfunctions of the culture of poverty.

I think fear and mistrust are what creates dysfunctions in any culture. Promoting fear undermines the functional elements of the culture of any class. Fear and mistrust are endemic in some poor neighborhoods. They are also endemic in some non-poor subcultures, not quite so geographic. Fear-promoting ideological subcultures create social dysfunction on a larger level.

The culture of poverty may only be the most concentrated form of the culture of fear.
Posted by Gruntled at 7:35 AM 3 comments:

Class Differences in How Parents Use Surveillance and Control Technology

The most original findings of Margaret Nelson's Parenting Out of Control are class differences in how parents think about technology to connect with, control, and monitor their children.

Professional-class parents strongly embrace connection technology - baby monitors when the kids are little, cell phones when they are bigger. On the other hand, these parents do not want V-chips and software filters that control children directly, and strongly reject tracking devices for cars and computers that secretly spy on kids. Professional parents, as we noted yesterday, most value their close relations with their children. Direct and overt monitoring is fine, because parents see that as part of a close relationship. But controlling and spying on their kids violates the basic trust with their children that these parents most cherish.

Middle-class and working-class parents, on the other hand, see it as part of their job to set clear limits for their children. They accept these kinds of technology as potentially helpful in doing that job. They are more likely to decide on a technology based on cost, and on whether they think a particular child needs a higher level of surveillance and control.

Moreover, middle- and working-class parents want their kids to operate within firm limits to free the parents from endless negotiation about the rules - something parents and kids in the professional class do endlessly.
Posted by Gruntled at 8:29 AM 4 comments:

Class Differences in What Satisfies Parents Most

Margaret Nelson, in Parenting Out of Control, found an interesting class difference in what gives different parents their deepest satisfaction.

Middle class and working class parents take the most satisfaction in their children's accomplishments.

Professional class parents take the most satisfaction in their close relationship with their children.
Posted by Gruntled at 9:32 PM 2 comments:

The Arrogance of the Educated Angers Everyone Else, Even If We Are Right on the Facts

In my church's Sunday School we have been considering creation and evolution. We are having the kind of conversation that you get up in the most highly educated congregation in any town - say, the Presbyterian Church in a small college town, or the Unitarian-Universalist Fellowship in a bigger city. We studied the details of biological evolution with a scientist. We studied the details of theological attempts to reconcile religion and science with a philosopher. In each case, we follow, and largely accept the increasingly esoteric nuances of the argument. We take for granted that our religious dogma has to fit within our scientific dogma.

Deepak Chopra recently put it in a clear way typical of this view:

My job as the sociologist in this discussion was to bring in this inconvenient truth: If you ask most Americans "did God create the universe pretty much the way it is now within the last 10,000 years?" 45% say yes. The illustration I used was that every time we go to Walmart (the biggest store in our small town), assume that someone in the aisle with you is a young-earth creationist.

Deepak Chopra takes if for granted that the 45%, our fellow Americans in the Walmart aisle, are not members of the modern world. The arrogance of that assumption really ticks them off. That does not make them right - I don't think they are right. I think, though, that the reaction to that arrogance is what is really behind the political anger that we see now.
Posted by Gruntled at 5:49 PM 15 comments: