Sydney Has the Harbor ...

and Melbourne has everything else.

This is what a Melburnian told us in our first hour in Australia. We have heard variants on it since in Melbourne. Sydneysiders, by contrast, look on Melbourne as quaint and economically "dead" (as a businessman told us).

Yesterday my son and I walked for hours around just a little corner of the Sydney Harbor foreshore. This was the bit, though, with the Royal Botanical Garden, the Opera House, and the Harbor Bridge. It is true: Melbourne, with its huge, orderly bay, has nothing like the shorefront here. And, of course, there is more to Sydney than the harbor. We have just begun to explore the interior neighborhoods. The central business district does have the vibrancy of big money. Sydney is older, and that extra 50 years of pioneer history matters in giving depth to the town. The Asian parts are notably bigger and more varied than Asian Melbourne.

The Sydney-Melbourne rivalry will probably last as long as Australia does. There will be no settling it. The competition is good for the country.

But for the Gruntleds, Melbourne appealed more to our sense of order and intellect.

We met with an American who became an Australian citizen. He is an international businessman who works all over the world. Much of his work has an Australian connection, but often he is working with clients in, say, Japan, doing a deal with Brazil. They don't really care where he is based.

He became an Australian citizen because he and his family like it here, and wanted to have roots somewhere. He did not, as I had thought, marry an Aussie, but brought his family here.

It struck me later that he is the first American that I know personally who became a citizen of another country just because he wanted to. He didn't grow up in the other country, marry a local, or have a political beef with the United States government. He just chose another country.

Many people all over the world know people from who have chosen to be Americans. Centre College, deep in the American heartland, has quite a few immigrants on the faculty, on the staff, and in the student body.

We study abroad to broaden our horizons. Meeting a US emigrant was an unexpected, but useful, kind of broadening for everyone in the class.
Posted by Gruntled at 4:54 PM 8 comments:

At 4 a.m., local time, President Obama was sworn in. My son and I set our alarm to get up and watch, as did many of the students in the class. For the Gruntleds, this was an exhilarating moment.

At 1 p.m., local time, the class all assembled at the Manning Bar in the student union of the University of Sydney. This is deep vacation time in Australia, the equivalent of the week before Labor Day in the U.S. Nonetheless, the U.S. Studies Centre of the Uni of Sydney sponsored a rebroadcast of the Inauguration. The bar theater, which held several hundred, was standing room only.

Before the big event the Centre showed the short films they had received in a contest about the U.S. election. These were mostly funny, generally pro-Obama, and pretty well done. The winner, a film about the author's obsession with the election, won him and a friend a trip to Washington for the festivities.

The crowd then watched attentively from the swearing-in of Vice-President Biden through the departure of former president Bush in the helicopter. The mood in the room ranged from pleased to elated. The greatest applause came when Pres. Obama completed the oath and when he was introduced by Sen. Feinstein as the 44th President of the United States. When the U.S. national anthem played, about dozen Americans stood, hand on heart.

When we asked a well-informed Australian political figure what the country thought about the U.S. election, he offered that Obama probably could have been elected Prime Minister of Australia. I am sure there are anti-Obama Australians, but we have yet to meet one. Even avowed members of the coalition of conservative parties here, the Liberals and Nationals, who were strongly connected with Pres. Bush, seem pleased with Obama's election. Or if not pleased, then relieved.

The third loudest applause of the afternoon at the University of Sydney: when President Bush's helicopter flew away.
Posted by Gruntled at 2:07 AM 7 comments: 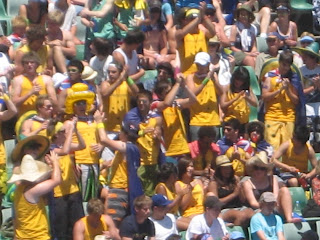 I spent Monday at the Australian Open tennis tournament. Everyone has told us that sports, especially international sports, are very important to Australian identity. The Australian Open is one of the biggest annual sporting events that Australia puts on for the world.

Oh yes: the Aussie's name was Bernard Tomic. Come on, melting pot.
Posted by Gruntled at 5:56 AM No comments:

Today we went to a protest of Israel's invasion of Gaza. Several thousand protesters gathered in front of the Victoria State Library to listen to speeches and hand out leaflets for other protests. Then the crowd marched several blocks to the Egyptian consulate for more speeches, and finished up at the Parliament building for a few more speeches.

The tenor of the speeches was that Israel was an imperialist oppressor. The secular speeches were strongly anti-Israel, and the master of ceremonies went so far as to denounce the two-state solution and praise Palestinian resistance. The liberal church people were the ones who called for peace and restraint on both sides. And the only person who denounced the Hamas rocket attacks on Israel as well as Israel's attacks on Gaza was the Mufti of Australia and New Zealand. He was ill, so his speech was read by another. The line criticizing Israel's attacks brought cheers. The line condemning Hamas' attacks was met with silence.

The United States came in for a bit of bashing, but it was secondary. There were many signs that went beyond the radicalism of the speakers, including quite a few that equated Zionism and Nazism.

I will post pictures later.
Posted by Gruntled at 3:27 AM No comments: