I Have Body-Image Issues ...

The divorce rate in the United States is at its lowest point since 1970, when the current divorce boom began with the passage of no-fault laws. The annual rate dropped from 5.1 per 1000 people in the worst year, 1981, to 3.6 last year.

Why only two cheers? The good news is that the marriage success rate is rising among college-educated couples. They really are learning how to hold it together better. Likewise, there has been some revulsion at easy divorce, especially among young people, who are "being the change they wish to see in the world" by staying married.

On the other hand, one reason the divorce rate is down is because the marriage rate is down in the first place. The proportion of couples who just cohabit, even after they have children, has been rising. Many children of the '70s divorces are so afraid of making the same mistake that they don’t marry at all. I predict that the cohabitation rate will start to go down among college educated people as more people learn that cohabiters who marry are more likely to divorce than are couples who don't live together before marriage.

The other not-so-good fact is that the divorce rate has not fallen among the least educated. The growing marriage divide is becoming a class divide. This divide cuts both ways: poor people are more likely to divorce (or have children without marrying), but also people who divorce are more likely to end up poor.

So let's build on the positive. And educate the poor and the cohabiters about what their real odds of happiness are.
Posted by Gruntled at 9:08 AM 3 comments:

Tony Blair has announced that he will step down as Prime Minister in Britain. This was long expected. His support has sunk lower than President Bush's. Gordon Brown, the Chancellor to the Exchequer (finance minister) will likely succeed Blair as Prime Minister.

My closest British friends are leaders in the Liberal Democratic Party, the third party of British politics for which there is no American equivalent. I have done door-to-door canvassing -- "knocking up" in the wonderful British expression -- for the Lib Dems.

Nonetheless, I have always appreciated Tony Blair for bringing the great Labour Party, the counterpart of my Democratic Party, back to the center (that is, the centre). New Labour, as Blair calls it, broke the socialist stagnation into which Labour had fallen, and shook off the persistent Loony Left.

Reagan had an excellent counterpart in Thatcher. Bush One, the sequel to Reagan, was matched in many ways by Major, the sequel to Thatcher. Clinton and Blair were so well matched in their style, their approach to party leadership, and their finding a middle way between the left and right of the moment that it was eerie.

Then came the election of 2000, which broke the pattern. Blair and Bush don't match. Yes, Blair has been a strong war ally (leader, really) for Bush Two, but they do not match in any other way. If Gore had won the 2000 election (as I think he did in all but the crucial technical sense), then the balance would have been maintained. And with dour and wonky Al Gore in the White House, perhaps Tony Blair would have given way to dour and wonky Gordon Brown five years ago. Blair would have preserved his legacy, Labour would be in a stronger position than it is now, the balance between Mother Country and Eldest Child would have been maintained. Oh, and the United States and Britain would be leading the world in fighting Al Qaeda in Afghanistan, instead of fighting alone in someone else's civil war in Iraq.
Posted by Gruntled at 8:27 AM 6 comments:

"Dear Abby" ran an urgent fear story today about a "national trend" of teenage girls deliberately getting pregnant at their senior prom in order to avoid having to deal with college. The writer reported that her daughter's friends from the lacrosse team, some of whom had been accepted at several Ivy League schools, wanted to have "prom babies" because they just couldn't handle the stress of academic success. The writer thought this must be a national trend, because she heard a similar story in another state.

Neither Snopes.com nor the Urban Legends page at About.com has anything on this one. The story has all the earmarks of an urban legend, though. The story is third-hand to begin with (the mom overheard some girls talking about something they had heard other girls had actually done). Furthermore, Abby says she has never heard of it before either (and she surely hears some doozies daily), though she advises, of course, that having a prom baby would be a bad idea.

I will send this to the good folks at Snopes. I would welcome any intelligence on this matter.
Posted by Gruntled at 9:19 PM 7 comments: 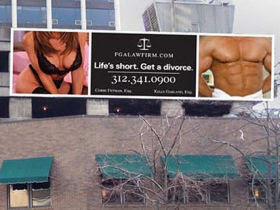 Chicago's "viagra triangle" promotes sleazy hook-ups. It is the natural place for the family law equivalent of ambulance chasers, the Fetman and Garland law firm, to place their billboard.

In any service business, law-status firms often resort to cheap sex in their ads to get noticed. The two women who run this firm have gone one step lower: get a divorce through us, and you can get cheap sex in real life.

Ironically, Corri Fetman, who dreamed up the ad, said she left her previous firm to set up her own because she experienced sexual harassment and a "demeaning environment." She invented their advertising campaign to "target business professionals who are informed about litigation and can appreciate the specialized, strategic services we offer."
Posted by Gruntled at 7:02 AM 6 comments:

The Faithful Inherit Society By Default

This is the conclusion of Philip Longman, a researcher at the New America Foundation. He wrote The Empty Cradle, about fertility decline across the world. In an excellent interview with Longman in Books and Culture, Brad Wilcox asked Longman what difference religious faith made in the future demography of the world. Longman argued that the people who do have larger families – enough kids to replace themselves, and then some – where much more likely to be religious.

One of Longman's most remarkable numbers is that the fertility gap between believers and nonbelievers in Europe is up to 15 or 20% now. Even in places where non-religious people are dominant in society today, they will have a harder time reproducing their power in the future because they are not reproducing in the most basic sense. Among the liberal educated elite, more than a third have no children or only one.

Fertility is indeed rising a little in Europe, and several European governments are pushing pronatalist policies for the first time in generations. Longman is skeptical that government programs can really nudge the birthrate much. He thinks the short-term financial advantages of no or few children will keep the birthrate down, especially for the educated. It is getting to the point where it takes a strong pronatalist family life – not public policy – to actually get people to bear the costs of kids. Religious people are most likely to value having a bunch of kids, despite the cost. And thus they inherit society, by degrees, and by default.
Posted by Gruntled at 12:33 PM No comments:

Evangelicals Adopting Foster Kids: Putting Their Care Where Their Mouths Are

There are half a million kids in foster care. More than 100,000 want to be adopted. Focus on the Family, Rick Warren, and other evangelical leaders are encouraging evangelical Christian families to see foster kids as, in effect, the orphans that the Bible instructs us to care for.

I think this is a great idea. We have had speakers in our family life class talk about the desperate state of foster care, and the truly life-saving help a good foster family – and even better, an adoptive family – can be to kids with no reliable families of their own.

There are, naturally, some people who object, and some who are just suspicious. Leaders of the movement are sensitive to the charge that evangelicals care about kids until they are born, so this is an effort to complete the pro-life agenda. I think the charge is mostly false, but even if it were true, adopting orphans is still a good thing to do. Foster agencies forbid corporal punishment, which many conservative religious families use. I can see the case that kids assigned to foster care have probably already had a bad experience with hitting at home, so corporal punishment would be worse for them than for other kids. Some are concerned that evangelical placement agencies would not work with homosexuals who wanted to be adoptive parents, but that is really about the agencies, not about the evangelical families. And to those who worry that Christian families would take their adopted kids to church – I can only hope so. Evangelicals invite everyone in their household to church – that is what makes them evangelical. Whether they can convince the kids is another matter, but any family might face that problem no matter how they came by their children.

An evangelical Christian movement to care for the orphans of our day seems to me a very good thing.
Posted by Gruntled at 4:23 PM 3 comments: