All Parents Can Talk to Their Kids

Kids from professionals' families have heard 30 million more words from adults by the time they get to school than kids from poor families.

This is a gap that families of any class can close.

One of the saddest footnotes I know is early on in Annette Lareau's Unequal Childhoods. She writes that by the age of three, middle class kids have a bigger vocabulary than welfare parents do.  So the poor parents will have to work on their own language skills to help their kids.

They should.  Win-win.
Posted by Gruntled at 8:11 PM No comments:

Things Are Getting Better: Child Mortality 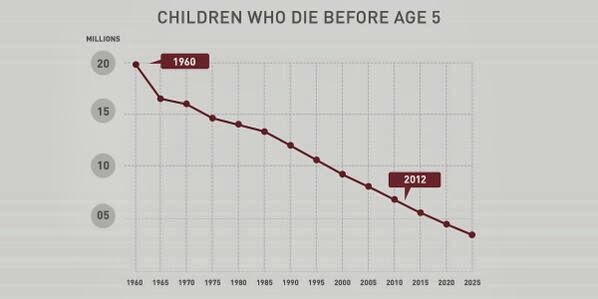 Bill Gates says this is his favorite chart.

This is, indeed, one of the best arguments that things are getting better.

Posted by Gruntled at 8:37 AM No comments:

The Beginning of the End for Big-Time "College" Sports

Football players at Northwestern University have won the right to unionize.  The National Labor Relations Board has recognized that players in the Division I money sports are, in effect, full-time employees of the university.

It is true that, as the commercials run by the National Collegiate Athletic Association say, nearly all college athletes will go pro in something other than sports. At Centre College's level, in Division III, all the students are truly scholar-athletes.

The money sports in Division I, on the other hand - especially football and basketball - are minor league professional teams located near universities.  The scandal recently documented at the University of North Carolina is only the tip of vast empire of fraudulent academics to sustain the myth of "scholarship" athletes.  The genius of the Division I sports teams is that they run a professional league where everyone gets paid like a professional - except the athletes.  In most states, the highest paid public employee in the entire state is the football or basketball coach at the flagship state university, making millions more than the governor.

I appreciate the role of local teams in creating a collective effervescence and promoting social solidarity.  Allegiances to athletic teams is one of the few things that binds people in a region across class and race lines. Sharing in the fortunes of 'our' team is an important part of the American civil religion.  However, it is only a happenstance of our history that two of our leading sports at the moment have their farm system located in universities.  Baseball had the good fortune to develop its minor leagues before the era of big-time college sports.  This is a model that would be more appropriate for football and basketball, as well.

Then the universities could concentrate on teaching and research, without the massive distortion to their mission that comes when the big sports tail wags the entire university dog.

More power to the players union.
Posted by Gruntled at 6:03 PM 1 comment: