Christian Social Science - How Do I Get at What Students Really Want to Know?

I am giving a talk next week at Hendrix College on "Being a Christian and a Social Scientist".  At the moment it ends this way:


Christianity also makes for a better social science than materialism can, precisely because people do act for reasons.  People act for reasons, they believe they act for reasons, and they believe their existence is meaningful because their reasoned action leads to meaningful ends. I can’t prove that people are right in these beliefs.  But I can prove that most people do have these beliefs (even people who profess materialism).  And I assert that the universal fact that people act as if they act for a meaningful reason is evidence that they are right.  Not proof, but strong evidence.

I think this is true, but doesn't really get to the core of what undergraduates are likely to be concerned about.

I would welcome suggestions for how to bridge this gap.
Posted by Gruntled at 11:43 AM 3 comments:

Fear of Anything as a Vote-Shaping Strategy

Of all the enemies of the happy society, fear is the greatest.  Fear is the acid of trust.

The strategy of Karl Rove and his disciples had been to make their party base fearful, and forget about trying to win over the center.

In recent years they have added strategies to make it harder for everyone to vote, which hurt their opponents more than it did their supporters.

In this last cycle, I believe they gave up on trying to instill fear of things that corporate interests usually oppose, namely taxes and regulations, or that social conservatives oppose, such as abortion and gay marriage.  This cycle they seemed to promote any fear at all as a way of ginning up the base. This worked against compromise and normal politics, and toward a black-and-white view of the world which their candidates would address with force.

This explains, I think, why there has been such political interest in Ebola and ISIS as things to be afraid of in this country.  Notice that the promoters of these fears are not focused on the dangers of Ebola to West Africans, or of ISIS to decent people in the Middle East - where those fears are well grounded.  Instead, they have promoted fear, even hysteria, about the minuscule dangers that either threat poses to Americans at home.  The aim is simply fear, and anything scary will do.
Posted by Gruntled at 2:36 PM 9 comments:

The Obama Administration is Very Good.

President Obama is a very good president, with a commendable record of achievement. The Affordable Care Act is a huge step forward for our nation, both in justice for all and in reducing the costs of medical care. The "war on coal" is being waged by the natural gas companies, not the federal government. The financial firms that wrecked the economy before he took office are under better regulation. The wars launched by his predecessors have been ended or reduced. The auto industry was saved. And, as you can see below, the economy is vastly improved. If he had a Congress that was not committed to obstructing all government, he could do even more good. 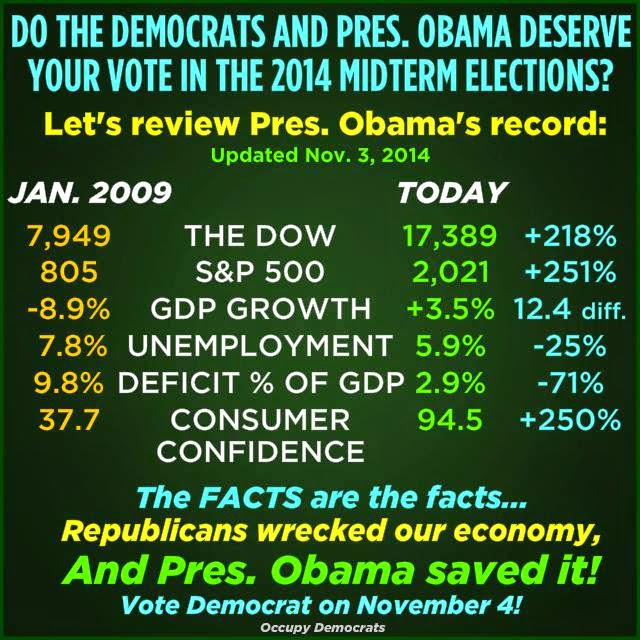