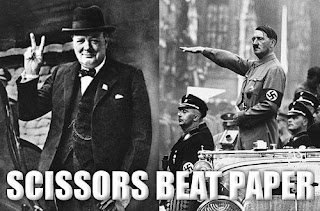 I am not sure where this came from, but I like it.
Posted by Gruntled at 9:27 AM 4 comments:

Andrew Cherlin contrasts U.S. and European approaches to marriage. One strong finding is that the U.S. is much more concerned about marriage, while the Europeans have more regulations on reproduction.

The intense debates that we have about the nature of marriage, including homosexual marriage and polygamy, are just not repeated with the same intensity in Europe. Many European nations have adopted same-sex marriage or civil union laws. Indeed, their civil union laws have turned into a whole "marriage lite" category that is mostly used by heterosexuals. Polygamists have begun to use European civil union laws to validate their unions, as well.

On the other hand, European law is more oriented toward children. Many European countries provide money for child expenses, day care, and maternity and paternity leave - a fact often mentioned in U.S. family policy debates. What is less well known is that most European legal codes are much more restrictive than American law about "assisted reproductive technology" - sperm banks, in vitro fertilization, and the whole panoply of high-tech baby making. American states, by constrast, regulate the fertility industry very lightly. There is not likely to be a European "octomom."

I read this difference a little differently than Cherlin does. I think we emphasize marriage because it is the most reliable, most individualized, and most portable institution for raising children. The more parents raise kids, the less society has to. Europeans, on the other hand, rely on the state more for many functions, including quite a bit of child rearing. Thus, the state regulates who can make children more closely, since the state will do more of the raising. But the Europeans care less about who marries whom because they don't rely on married couples to do most of the raising of the next generation - if there is one.
Posted by Gruntled at 7:39 AM No comments:

I am reading Andrew Cherlin's The Marriage-Go-Round: The State of Marriage and the Family in America Today. Cherlin is a big name in family sociology, and this is the book he says he has been thinking of writing for a long time. His main concern is why and how American family patterns are different from European patterns.

Hence, the marriage-go-round. We keep marrying and remarrying for the family, but also breaking up for ourselves.
Posted by Gruntled at 1:21 PM 3 comments:

Marry in Your Twenties

Everyone in the pro-marriage racket has been promoting Mark Regnerus' fine piece in the Washington Post, "Say Yes. What Are You Waiting For?" I agree entirely. I see my students putting off the thought of marriage right after college because they think they should get all their ducks in a row first. And they have lots of ducks.

The best line from Regnerus:
"Marriage actually works best as a formative institution, not an institution you enter once you think you're fully formed."
Posted by Gruntled at 2:07 PM 8 comments:

The Kentucky Derby - High Holy Day of our Civil Religion 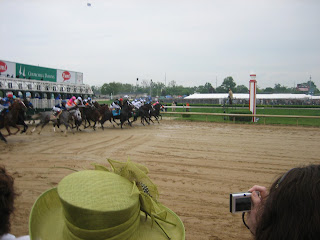 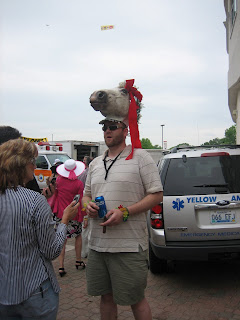 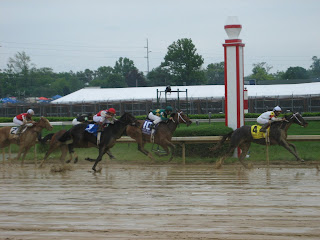 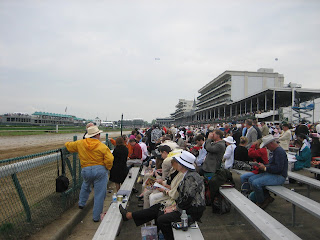 Yesterday I began my quest to see the top 50 things that every Kentuckian should see before 50 with everyone's number one choice, the Kentucky Derby. I passed up the wild-youth infield and the horse-serious paddock to be in the land of fancy hats.

I got a real seat, albeit the Seat Farthest Out.

I get a good look at the final turn in an early race.

We were well situated for the start of the Derby.

Still, what I spent hours doing was walking through the crowds and lounging in the congregation points, watching all classes of Derby-goers go by.

Many people enjoyed $9 juleps. I was surrounded by cigar smoke, coming from women and men. And gambling all day long, in every level and corner of Churchill Downs. None of those things were my cup of tea, but I appreciate them as part of the ritual. And the gambling pays most of the bills.

What I liked were the hats. I started to take pictures, but there were literally thousands of great ones. I gave up and just appreciated. Derby hats seem to me to be a rare and innocent pleasure.
Posted by Gruntled at 6:46 PM 8 comments: