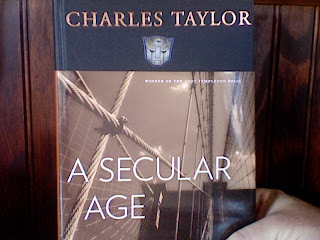 We have been reading A Secular Age in Theory Camp this week. One of our number noted that an important theme of the book is how one age was transformed into something quite different. So he got us all Transformers stickers to annotate our books with.
Posted by Gruntled at 8:44 AM 1 comment:

At the halfway point of Theory Camp we came to a really big issue. Taylor writes that what we experience now is:

“the sense that all order, all meaning comes from us. We encounter no echo outside. In the world read this way, as so many of our contemporaries live it, the natural/supernatural distinction is no mere intellectual abstraction. A race of humans has arisen which has managed to experience its world entirely as immanent. In some respects, we may judge this achievement as a victory for darkness, but it is a remarkable achievement nonetheless.” (376)

Several of us saw the sociological reality that many people act as if their world is entirely immanent, with no reference beyond this world. Taylor's larger philosophical point, though, was eye-opening. To really grasp that there is a "race of humans" (though I think it is a class) who believe that all meaning comes from themselves, and who experience the world as entirely immanent because they believe that this world is all there is - was scary. "That's just crazy" said Scott* (possibly not his real name).

A very mind-expanding day. Worth the price of admission. And coffee.
Posted by Gruntled at 1:44 PM 10 comments:

Charles Taylor treats Reform - the larger movement that includes the Reformation, the Counter-Reformation, and their precursors - as the social movement that ultimately and without intending to produced today's secular subculture. His argument is surefooted and dense. At one point, though, he makes this remarkable admission:

“a very long-lasting bent in European culture towards Reform, in the widest sense … [is] the attempt by elites to make over society, and the life and practices of non-elites, so as to conform to what the elites identify as higher standards. This is a remarkable fact. I don’t pretend to have an explanation for it.” (242)

His main point is that the religious mission to fully Christianize the masses had a secondary goal of civilizing them. The irony is that civilizing, which was to be a secondary benefit of evangelizing and conversion, came to displace evangelizing as the primary goal. And this is doubly true of all the many subsequent social reform movements, which are still largely carried about by religiously motivated elites.

I have been puzzling over the "remarkable fact" for which he has no explanation. I put this question to the Theory Camp this morning. "Scott" (not her real name) offered that the elites might want to reform the masses in the elites' own image as an exercise of power. Scott apologized for offering so cynical an explanation. We then discussed the various "hermeneutics of suspicion" as a distinctively modern way of understanding - and undermining - seemingly well-meant actions.

I am disinclined to a cynical view. To be sure, every social movement is tinged with pride and self-assertion. Still, I think that the many movements to lift up the poor, marginal, and even self-destructive are primarily motivated by a good desire to help. They may be misguided, soft-headed, and produce unintended consequences. But the motivation is, on the whole, good. And the fact that a segment of the elite is moved to help the worse off is a basic fact about our society.

Taylor says that the great ethical issue for a secular society is whether this movement toward mutual benefit can really be produced by secularity itself, or whether it is parasitical on a prior religious culture, and draws mostly from religious people today. My observation is that people who stick with good works for the badly off are mostly religious people. In principle a sustained good works movement of secularists could be possible. But I don't think it likely. When secularists want the poor helped, they make the state do it, and tax everyone to pay for it. A move which produces more unintended bad consequences than good works that voluntarily come from the (religious) heart.

A great achievement of modern civilization is that the social elite do not spend their time making war on one another. Instead, they make business on one another.

Charles Taylor says that one of the great achievements of our modern moral order is creating "the economy" as an autonomous sphere, which has become the central arena of action for our ruling class. This is the last step in the long social process of taming the feudal nobility.

The nobles were independent military actors through the wars of religion. The revulsion against those wars created the idea of religious toleration and moved religion out of the state and into the new "civil sphere." A side effect was to reign in the nobility to royal power, and to expand the elite to include the non-military gentry. The warrior elite and the gentry elite were both domesticated as educated, civil, advisors and agents of royal power. The English elite broadened to include economic functions, both through the state and through their own business. The English pattern became a model for other national elites.

America, which was born without a warrior caste, or even with nobles, so takes for granted that the ruling class is a business class that this seems like common sense. It is good, therefore, to step back and celebrate the civilizing of the warrior class.
Posted by Gruntled at 12:36 PM 9 comments:

Charles Taylor rehearses the argument that all structure needs some outlet of anti-structure. In the pre-modern "enchanted" world, order exists in tension with disorder, and both need one another. Order is a world of power and inequality, even if it conduces to human flourishing; disordering the world’s order in the name of human solidarity - as in the medieval Carnivale - reminds us of the transcendent which unites and equalizes us.

When, in the modern world, we lost the sense that structure needs its complement of anti-structure, we laid the foundation for secularizing the public sphere. This way also leads to totalitarianism. He sees the French Revolution as the beginning of the eclipse of anti-structure. The revolutionary regime made festivals, as communist regimes do. But these celebratory totalitarian festivals are so dull that they fall with the regime.

Modern liberal societies recognize the need for complementary anti-structures in the division of powers. Pluralist liberalism allows a wide realm of anti-structure in the negative liberty of the private domain. The “public spheres of private life” – art, music, literature, thought, religion – create the voluntary public that complements the obligatory public of the state.

“All structures need to be limited, if not suspended. Yet we can’t do without structure altogether. We need to tack back and forth between codes and their limitation, seeking the better society, without ever falling into the illusion that we might leap out of this tension of opposites into pure anti-structure, which could reign alone, a purified non-code, forever.” (54)

The latter was the ‘60s revolutionaries’ error.

I see the force of this argument intellectually, but resist it in every other way. I have a dread of disorder, and do not see chaos as appealing at all. I would not go so far as to impose order on the unwilling, but I do think their lives would be better, and social life would be better, if everyone lived an orderly life.

Taylor reads the Reformation, as I do, as bringing the ordered life of the monastery out into the world, into the lives of all Christians. Taylor thinks the Reformers were unrealistic in thinking that the masses could sustain that level of order. I believe Taylor is correct. Which brings me to this question: Did the monasteries and convents also need bouts of anti-structure to renew their commitment to order? Or can some people, a small minority no doubt, maintain structure indefinitely without anti-structure?

Each year I run a two-week Theory Camp in which I sit down with a handful of students to work through a hard social theory book. Charles Taylor, a philosopher at McGill, has expanded his 1999 Gifford Lectures to a suitable fat book. We began our discussion today. I will blog as we work though it.

Taylor says that the modern age has developed a third kind of secularization: whole communities now exist that believe fullness is possible without God or reference to a transcendent plane. To be sure, these communities are minorities even in their home societies in the North Atlantic world, and are tiny minorities on the planet as a whole. Nonetheless, Taylor is making sense of a social world that is common to most academic and many other highly educated people.

My interest as a sociologist in Taylor's notion of secularized communities is in finding their distinctive class location.