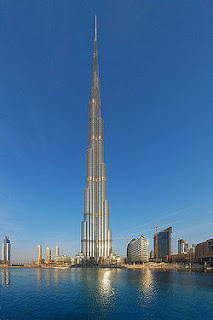 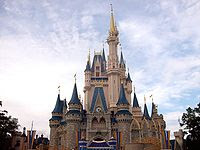 Eminent sociologist George Ritzer gave a plenary address to the Southern Sociological Society this week on consumption and hyperconsumption. I learned a wonderful new term from this address: a weenie. Walt Disney, a genius at marketing, thought that his theme parks needed a tall, striking visual magnet to draw visitors along through the park. And as they were drawn along toward the magnet, their path could be lined with stores selling them stuff. He called these visual magnets "weenies." Cinderella's Castle is the great Disney weenie.

Ritzer said the principle of the weenie has not been lost on brand makers around the world. He showed a series of images of the arms race of tallest buildings in the world, as they have grown increasingly outsized. The biggest weenie of them all is also the most ridiculous: the Burj Khalifa in Dubai. It is, indeed, the world's tallest building - a Chrysler Building stacked on top of an Empire State Building. It is also, Ritzer said, empty, and not in use except for the observation tower. The Burj Khalifa is the perfect emblem of both the weenie and of hyperconsumption.
Posted by Gruntled at 7:50 AM

The Cinderella castle uses forced perspective to make it appear even larger, because there is only so high a building can be in the US before it needs a red warning light on top for aircraft, and that would ruin part of the magic. I wouldn't be surprised if the Burj Khalifa wasn't intentionally using a similar design trick with its narrowing structure, just more marketing lies you know.
http://en.wikipedia.org/wiki/Cinderella_Castle#The_Magic_Kingdom

I knew Cinderella's Castle used forced perspective, but I did not know about the airplane warning light.

Here's another link for its history:
http://www.dadsguidetowdw.com/cinderella-castle.html

The height limits without a blinking light were 200, and the castle is 189 feet tall. I watched a History Network show years ago on it, and for some reason that always stuck with me. I sadly haven't been to the park in years, although my older sister did get to work there for a summer while she was in college, and she talked about all the stuff they had to do to keep the park magical (Unseen underground garbage chutes, secret entrances for the characters, and the like). The more I start to think about it the more Disney World does start to seem like DC in some ways.