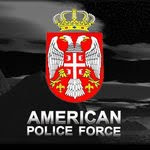 A mysterious, and mysteriously well-funded "private security" company bought an unused prison in Hardin, MT for a "training facility." They are named "American Police Force" and use a double-headed eagle with a crown as their symbol. This is the same symbol that the sometime royal family of Serbia uses. Yes, nothing says American like a crowned symbol of European nobility.

This story reminded me of Blackwater, the Bush administration's favored mercenaries, who were led by a character right out of "Superman," Erik Prince. After Blackwater got lots of bad publicity for shooting civilians they changed the company name to Xe, heading further into the blackwater of comic book world.

Sure enough, American Police Force seems to be a spinoff of Xe.
Posted by Gruntled at 11:49 AM

"Super Lefty" Wade Rathke and ACORN the group deeply involved with the Obama administration will likely change their name after engaging in one illegal activity after another.

The group was one of Obama's favored political mercenary groups. No word yet on their new symbol. Rumor has it that they may choose a stick figure of Che Guevara.